President Ram Nath Kovind's trip will be the highest-level visit from India ever to the three West African countries. This is his fourth visit to the African continent. 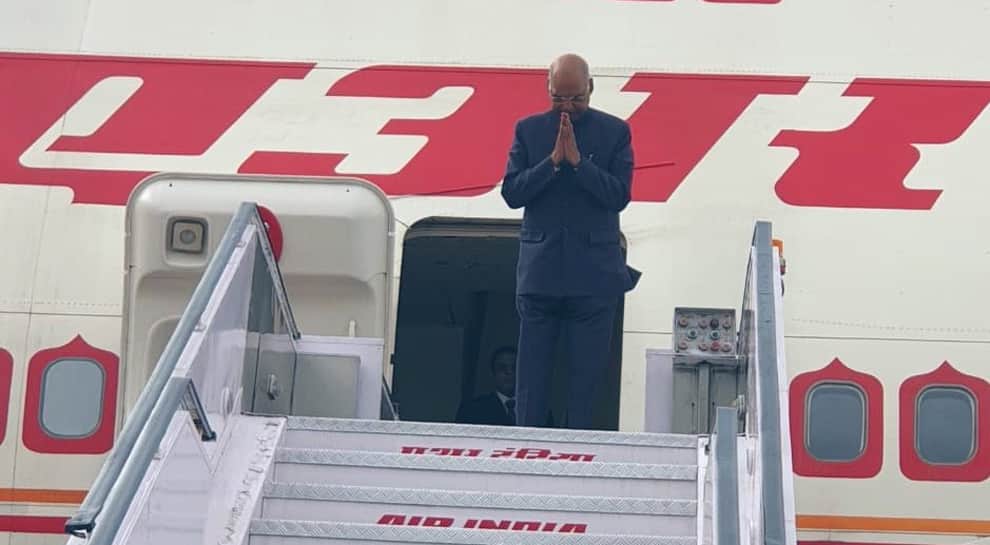 New Delhi: President Ram Nath Kovind departed for an official seven-day visit to the African countries of Benin, The Gambia and Guinea on Sunday here. "This is his first state visits in the third year of his Presidency. This is the first-ever state visit of a President of India to any of the three countries," the President of India tweeted. This is his fourth visit to the African continent.

"The President will hold delegation-level talks with the leadership of the host countries to strengthen ties in keys sectors such as trade, investment and energy. He will address the National Assembly of Guinea and The Gambia and will interact with the Indian community," it added.

This will be the highest-level visit from India ever to the three West African countries. The President will be accompanied by Minister of State for MSME, Animal Husbandry, Dairying and Fisheries, Pratap Chandra Sarangi, and Member of Parliament Dilip Ghosh.

President Kovind will arrive in Cotonou, the largest port city on the south coast of Benin, on Sunday afternoon. There, the President is scheduled to hold talks with the President of Benin, Patrice Talon, and will later travel to Porto Novo, the seat of Beninese Parliament, the Ministry of External Affairs said in a statement.

In a special honour extended to India by Benin, President Kovind will be addressing the National Assembly in Porto Novo. The President of Benin will also be hosting a banquet in the honour of President Kovind on the same day.

President Kovind will meet members of the Indian community at a reception hosted in his honour in Cotonou on July 30 before departing for The Gambia. During his visit to The Gambia, the President will hold delegation talks with the President of The Gambia, Adama Barrow, in capital Banjul on July 31.

As a special gesture, the National Assembly, which is currently in recess, will hold a special session for President Kovind`s address on the same day. The National Assembly building complex in Banjul is one of the prominent projects in West Africa built under Line of Credit extended by India. President of The Gambia will be hosting a banquet in the honour of the Indian President.

The other elements of the visit include the inauguration of exhibitions on Mahatma Gandhi and Khadi and Indian community reception. President Kovind is further scheduled to depart for Guinea on August 1, the Ministry added.

President Kovind will reach Conakry, the capital of Guinea on August 1 where he will be received by President of the Republic of Guinea, Alpha Conde, and will be accorded a ceremonial welcome. There, the president is scheduled to hold delegation-level talks with President Conde on August 2.

At a media briefing last Thursday, Vijay Thakur Singh, secretary (East), Ministry of External Affairs, said: "The upcoming visit of our Rashtrapati ji to West Africa is a reiteration of our growing relations with Africa and, especially the ECOWAS (Economic Community of West African States) and as all the three African countries - Benin, The Gambia and Guinea - are members of this group."