Priyanka said that she had assured the administration that she would take only four people with her and yet was not allowed to go to Sonbhadra. 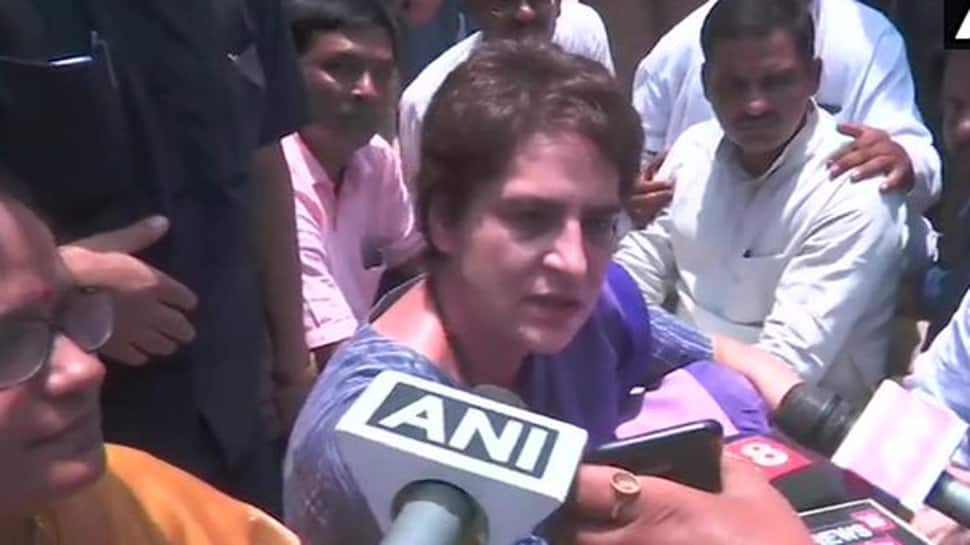 Congress general secretary Priyanka Gandhi Vadra was on Friday stopped on way to meet the families of 10 victims who were killed two days back in Sonbhadra in Uttar Pradesh. The Congress leader had arrived in Varanasi earlier today and met the people who got injured in the firing incident.

The convoy of Priyanka Gandhi Vadra was stopped by the administration at Narayanpur near Mirzapur. Following this, the Congress leader sat on a dharna along with other party leaders. The Superintendent of Police of the area dispatched a team of police personnel, including woman cops, to the area to avoid any untoward incident.

Speaking to news agency ANI, Priyanka said that she had assured the administration that she would take only four people with her and yet was not allowed to go to meet the families of the victims.

Priyanka Gandhi Vadra in Narayanpur on if she has been arrested: Yes, we still won't be cowed down. We were only going peacefully to meet victim families(of Sonbhadra firing case). I don't know where are they taking me, we are ready to go anywhere.' pic.twitter.com/q1bwkucl0g

“I just want to go and meet families of victims (Sonbhadra firing case). I even said will take only four people with me. Yet the administration is not letting us go there. They should tell us why we are being stopped,” said Priyanka. “We will continue to sit here peacefully,” she added.

She further said, "I don't know where are they taking me, we are ready to go anywhere."

On reports suggesting that the Congress leader was detained, UP DGP OP Singh clarified that Priyanka was not detained and was just stopped from going to Sonbhadra. He added that she was being taken to Chunar guest house.

This came less almost an hour after Uttar Pradesh Chief Minister addressed a press conference wherein he assured that strict action would be taken against those behind Sonbhadra killing. The Bharatiya Janata Party (BJP) strongman said that he had asked Director General of Police OP Singh to personally monitor the situation in the area.

The Chief Minister also announced that a new high-level committee would probe the incident and submit the report within 10 days, adding that the two-member panel for initial probe had already submitted its report.

He, however, added that the conflict dates back to 1955 when the then tehsildar had allotted the land in violation of norms. The Chief Minister pointed that from 1955 to 1985, the land belonged to Adarsh Society, following which it given to an individual.

“In 2017, the land was allotted to the Gram Pradhan. And the incident occurred when the encroachers were being removed from the land,” said Adityanath.

The firing followed a dispute between Gram Pradhan and villagers over a disputed land meant for farming.

Taking to microblogging site Twitter shortly after the incident, the Uttar Pradesh Chief Minister office had said that it had taken cognisance of the matter. The CM office also expressed condolences to the families of the deceased.