Pakistan's leading national daily The Dawn on Wednesday called upon the Nawaz Sharif-led Pakistan government to uphold the rights and lives of Hindus in Thar desert region. 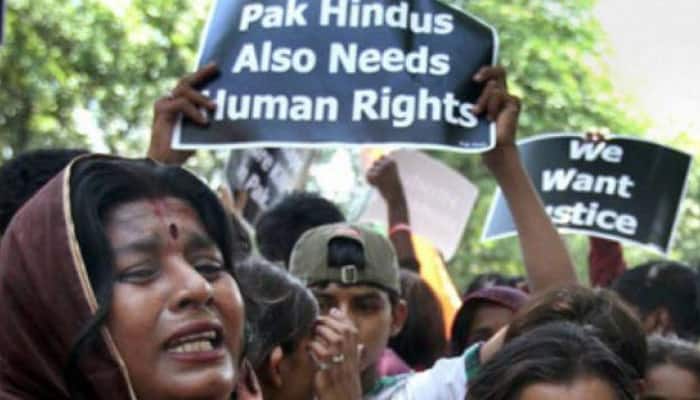 New Delhi: Pakistan's leading national daily The Dawn on Wednesday called upon the Nawaz Sharif-led Pakistan government to uphold the rights and lives of Hindus in Thar desert region.

"The state has a duty to protect the Hindu community and its right to live as Hindus," wrote the national daily in its editorial column.

The daily claimed that Hindus and Muslims living in the area have led peaceful coexistence traditionally.

"However, there have been indications for a while now that Thar’s benign social ethos is undergoing a change, a change that bodes ill for the future of those who call it home and one that may well have wider repercussions for the rest of the country," it says.

Nearly '50 per cent' of the population in Tharparkar District are Hindus. A recent investigative report by the paper highlighted how Hindus in the region (and Umerkot district) are being forced to convert into Islam by religious elements and feudals through exploit poverty and class distinctions.

With an increase in the number of such forced conversions, The Dawn urged the government to provide protection to Hindus.

"After the hue and cry over forced conversions in Umerkot and Tharparkar districts, the Sindh Assembly passed a bill against the practice in November 2016. But before the governor could sign it into law, some religious organisations threatened widespread agitation if the government did not withdraw it," says The Dawn in the earlier investigative piece.

Underage Hindu girls form the highest cases of such conversions.

"The conversion of Hindu girls — many of them underage — and young women, is often used to ‘legitimise’ their kidnapping and rape. Cowed into submission, and afraid of rejection by their community if they return, they can do little else but say their conversion was voluntary.

"How else can one explain that young girls and women of marriageable age comprise the vast majority of such cases? Moreover, if they do convert willingly, why is it they never contact their families again?

"It is heartening that most Muslims who live alongside Hindus in Thar as part of an integrated social milieu are equally disturbed by the changes they are witnessing in a land that has seen none of the religious conflict that much of Pakistan has been witness to," says the daily.