“My first tweet. Thank you all for the best wishes! Honoured to be given this responsibility. Proud to follow on the footsteps of @SushmaSwaraj ji,” he said. 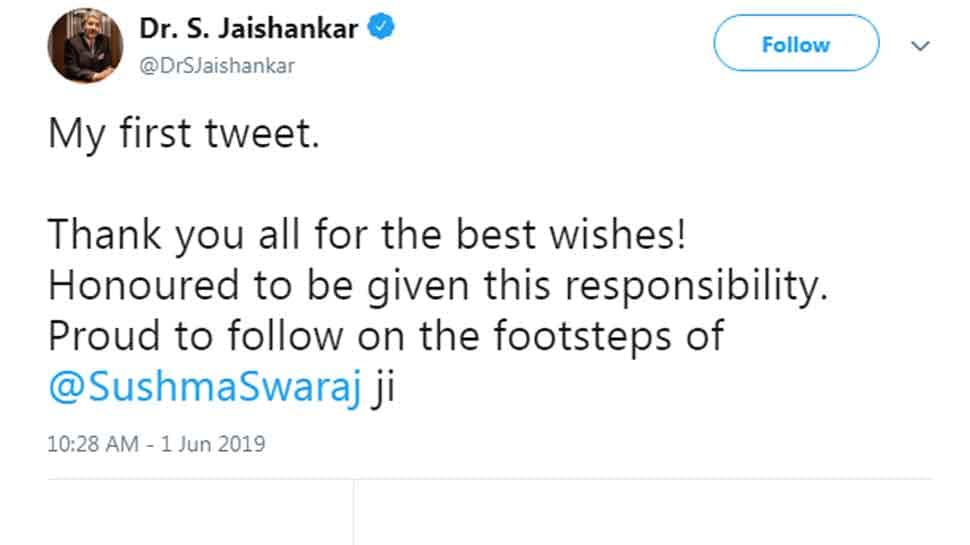 In his second tweet, Jaishankar tagged his colleague Minister of State V Muraleedharan and said We at Team @MEAIndia continue to be at your service 24x7 Happy to be leading the effort with my colleague MoS Muraleedharan ji”

We at Team @MEAIndia continue to be at your service 24x7

The 64-year-old senior diplomat was a surprise pick in the Modi cabinet 2.0. The 1977-batch IFS officer has served as a foreign secretary from 2015-2018. He's considered an expert on China and the US and was a key member of the Indian team which negotiated the landmark Indo-US nuclear deal.

However, the day portfolios were announced, Jaishankar's son Dhruva Jaishankar stole some of his limelight with tongue-in-cheek tweets. Responding to an apparently misplaced request to the new Foreign Affairs Minister for help regarding visa or passport, Dhruva said, "Dude. Wrong Twitter". This was followed by a humorous clarification from Dhruva in which he said, "And before anyone asks, I can absolutely not help anyone with their passport, visa, or getting-you-out-of-a-foreign-prison problems." Dhruva added, "I have plenty of those problems myself (other than the prisons - I try to stay clear of those)."