The London-based Pushpam has also announced the formation of a political party, ‘Plurals’, to contest the upcoming Bihar Assembly election as its chief ministerial candidate. 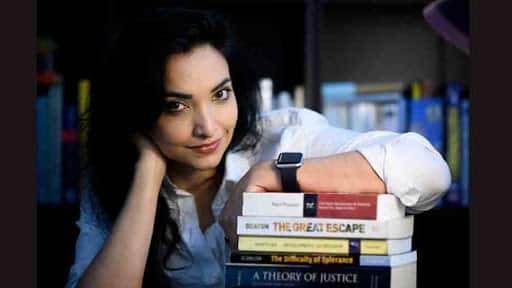 New Delhi: Ahead of Bihar Assembly election 2020, the entry of Pushpam Priya Choudhary, the daughter of former Janata Dal-United (JDU) MLC Binod Choudhary, has added an interesting chapter in the state politics.

Pushpam Priya Choudhary has virtually challenged JDU supremo and Chief Minister Nitish Kumar by making an announcement through advertisements in several newspapers of Bihar about her intention to contest the state assembly election. The London-based Pushpam has also announced the formation of a political party, ‘Plurals’, to contest the upcoming Bihar Assembly election as its chief ministerial candidate.

The announcement on Women's Day (March 8) holds significance as her website states, "People often say “Please, I have no interest in politics!”. Unfortunately, politics has more power over us than we think. It can either ruin us or build us an exceptional future. It is naive to think that we have a choice not to be interested in politics."

"Politics is policy-making and access to opportunities. A good policy means a good future. Take interest to control politics, else it will continue to control you," it adds, conveying a clear message to people of Bihar.

About her party, her website says, "PLURALS is not just a political party, but a political revolution, which is based on the idea that every life is valuable and deserves to be treated as an end in itself and not merely as means to an end."

In an open letter, she has said that after becoming the chief minister she will work to make Bihar the most developed state in the country by 2025, and the progress of the state will be at par with any European country by the year 2030.

Talking about Bihar, the website says, "Bihar has the most fertile land in the world, is blessed with a young hard-working potential workforce and with the right public policy can easily beat underdevelopment. Then why has it not happened so far? Why is the workforce still looking for employment or labours to earn money that is far from decent."

"Our forefathers taught us that the first step towards change is to "challenge the status quo". This is the idea that Plurals represent. It’s time we, the army of Plurals become a strong, competent opposition that questions this government and demands progress. We cannot afford to stay where we are in this fast-moving world. We are just getting started. And you are either a Plural or against your own future. There isn’t a third option," said the website while asking people to join Plurals.