In an open letter, which was made public on his official Twitter account, Rahul said that the BJP's sweeping election win proved that the RSS' aim of capturing the country's institutional structure was now complete. NEW DELHI: Minutes after confirming his resignation from the post of party president and asking the party's central leadership to quickly appoint someone on the top post, Rahul Gandhi removed ''Congress President'' from his bio on his official Twitter handle on Wednesday.

His bio on Twitter now introduces him as Congress Member of Parliament. 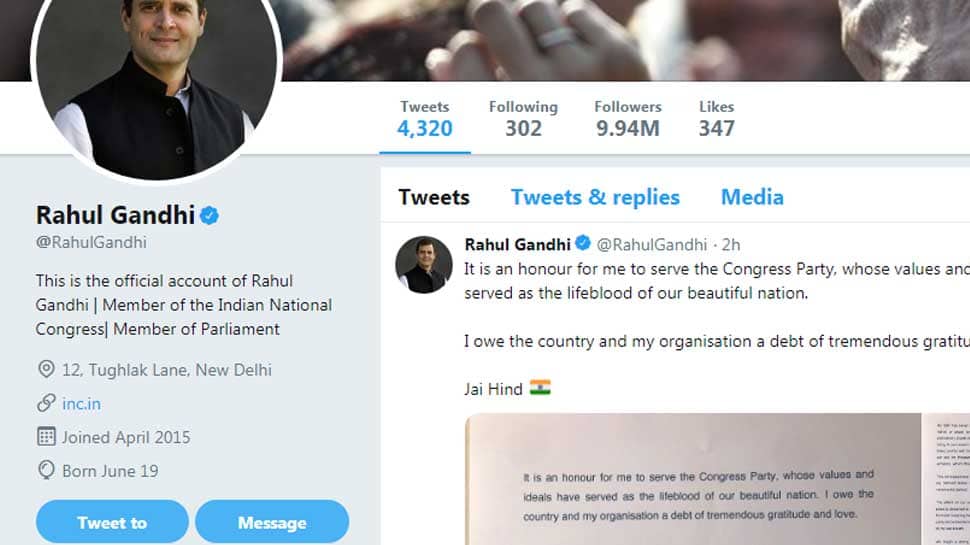 Taking to Twitter, Rahul announced that he has resigned as the Congress President and that only he was to be blamed for the party's defeat in 2019 Lok Sabha election during which it could win only 52 of the 542 seats.

In an open letter, made public for the first time on his Twitter handle, Rahul said that the BJP's sweeping election win proved that the RSS' aim of capturing the country's institutional structure was now complete.

"As president of the Congress party, I am responsible for the loss of the 2019 election. Accountability is critical for the future growth of our party," Rahul said in the open letter.

"It is for this reason that I have resigned as Congress President," he added.

It is an honour for me to serve the Congress Party, whose values and ideals have served as the lifeblood of our beautiful nation.

I owe the country and my organisation a debt of tremendous gratitude and love.

The letter further read, "Rebuilding the party requires hard decisions and numerous people will have to be made accountable for the failure of 2019. It would be unjust to hold others accountable but ignore my own responsibility as President of the party."

Rahul, who is the son of UPA chairperson Sonia Gandhi, said that while it was important for someone new to lead the Congress, "it would not be correct for me to select that person".

Rahul Gandhi had earlier in the day told reporters that he has already submitted his resignation and was no longer the party chief.

"The Congress Working Committee should convene a meeting at the earliest and decide on a new party chief," he said.

He, however, said that he would remain "a loyal soldier of the Congress" and "a devoted son of India".

He also added that "I owe the country and my organisation a debt of tremendous gratitude and love," concluding with "Jai Hind".

Rahul Gandhi had announced his decision to step down as Congress president on May 25 - two days after the 2019 Lok Sabha election results were declared.

It may be recalled that Rahul Gandhi was himself defeated in Amethi in Uttar Pradesh but won from Wayanad in Kerala.

Rahul Gandhi's decision has triggered a big crisis in the Congress and the CWC - its highest decision-making body – is likely to meet soon to appoint a new president.

Rahul has categorically turned down emotional appeals made by top Congress leaders and workers to continue as party president, triggering a flurry of resignations from various state and district committees of the party.