Rajasthan govt introduces Bill to give 5% quota in jobs, education to agitating Gujjars, 4 other castes

Congress leaders had claimed that the state government would announce a proposal on Wednesday to break the deadlock. 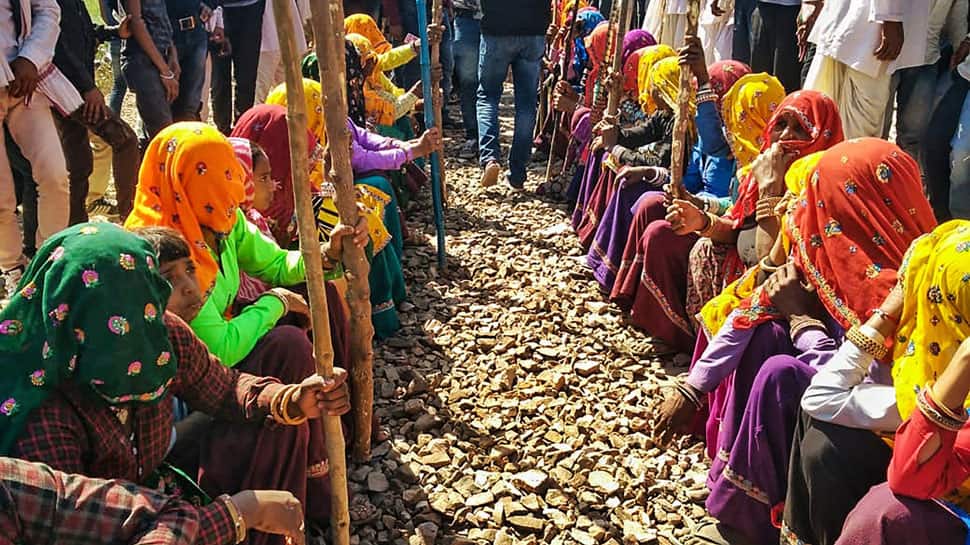 The community's agitation for reservation entered the fifth day on Tuesday. Congress leaders had claimed that the state government would announce a proposal on Wednesday to break the deadlock.

The agitators continued to block rail tracks and highways, causing inconvenience to common people. On Tuesday, they blockaded Chaksu town, about 40 km from Jaipur on National Highway 52, said the police.

The blockades on the Agra-Jaipur-Bikaner National Highway-11 in Dausa district, state highway in Nainwa of Bundi district, Malarna road in Sawai Madhopur and the Karauli-Hindaun road at Budla village in Karauli district continued.

The North Western Railway informed through a bulletin that three trains were cancelled and two diverted on Tuesday.

Though the deliberation of the meeting was not briefed officially, some Congress legislators indicated that the government will announce a proposal in the state assembly Wednesday, seeking to break the impasse.

A Congress legislator from Gujarat, Himmat Patel, also met Gujjar leader Kirori Singh Bainsla at the protest site on Malarna Dungar rail track to express his party's commitment in resolving the issues. But the Gujjar leaders had refused to back-off from the tracks and roads.

"We have not received any communication from the state government so far. Dharna will continue and we will not go back until the government hands over 5 per cent quota order," Vijay Bainsla, son of Gujjar leader Kirori Singh Bainsla, had said.

Gujjar agitation leader Kirori Bainsla and his supporters began their indefinite sit-in on railway tracks in Malarna Dungar of Sawai Madhopur on Friday evening. Bainsla has stuck to the demand for five per sent reservation to the Gujjar, Raika-Rebari, Gadia Luhar, Banjara and the Gadaria communities, and has to refused to move from the tracks until the same is met through an official announcement.

A state government delegation, including Tourism Minister Vishvendra Singh and IAS officer Neeraj K Pawan, had held talks with the protestors on Saturday but failed to come to an agreement.