The red and yellow marigold bedecked train was flagged off by three former staff of Rajdhani Express after a ceremonial cake cutting and release of a greeting stamp to commemorate the epoch-making event. 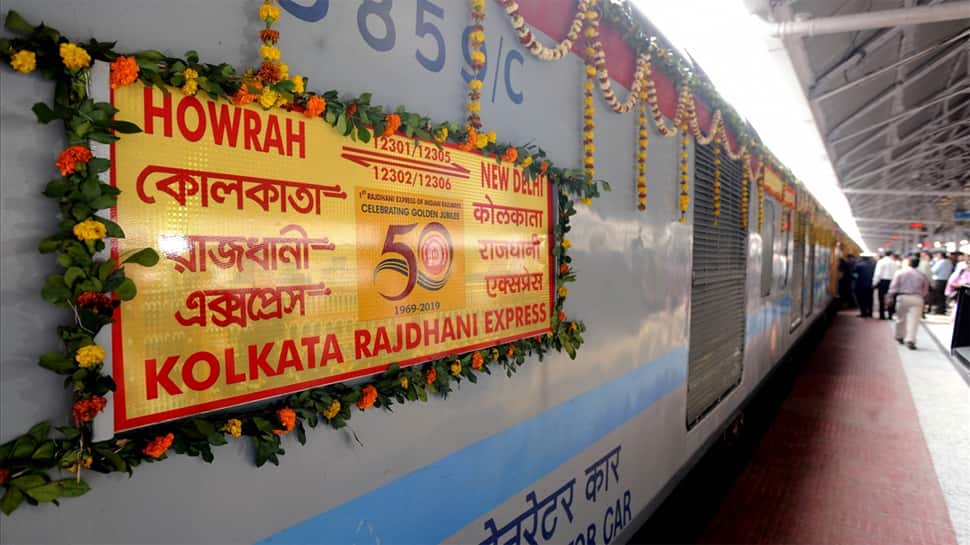 Kolkata: The country's first Rajdhani Express, which revolutionised Indian Railways by way of speed and luxury in the 1960s, turned 50 Sunday as the flower-bedecked train chugged out of Howrah station on its golden jubilee run.

An Eastern Railway (ER) official said that the Kolkata-New Delhi Rajdhani Express embarked on its maiden journey on March 3, 1969 from Howrah, making it the country's first fully-airconditioned, high-speed train that covered the 1,450 km stretch in 17 hours and 20 minutes.

The red and yellow marigold bedecked train was flagged off by three former staff of Rajdhani Express after a ceremonial cake cutting and release of a greeting stamp to commemorate the epoch-making event.

Senior officers of ER, including its general manager Harindra Rao, were present at platform number 9, which has been the berthing place of Rajdhani Express since inception.

Passengers of the golden jubilee run of the train were treated to some of its old delicacies like fish fry or vegetable cutlets and 'rosogollas' apart from ice cream for dessert, said IRCTC (East) general manager Debasish Chandra.

Rajdhani was the first train in the country whose fares included charges for meals served.

Brand new linen and disposable napkins with greetings of "50 Years of Rajdhani Express" were distributed among the passengers, the ER official said.

The railway staff on duty in the train wore a badge with the message of celebration of 50 glorious years of Kolkata Rajdhani Express.

With the passage of time, the chair cars were replaced with AC 2-tier and AC 3-tier coaches, apart from increasing the number of AC first class coaches, while the dining car was done away with.
The iconic train went through stages of evolution over the years, the official said, adding that the present Kolkata Rajdhani Express was upgraded with an elegant makeover of existing LHB (Linke Hofmann Busch) coaches in 2017.

After Meghalaya mine tragedy, 4 killed in mishap at illegal coal mine in Nagaland