The Amarnath cave is considered to be one of the holiest shrines in Hinduism and hundreds of thousands of devotees make an annual pilgrimage to it across challenging mountainous terrain. 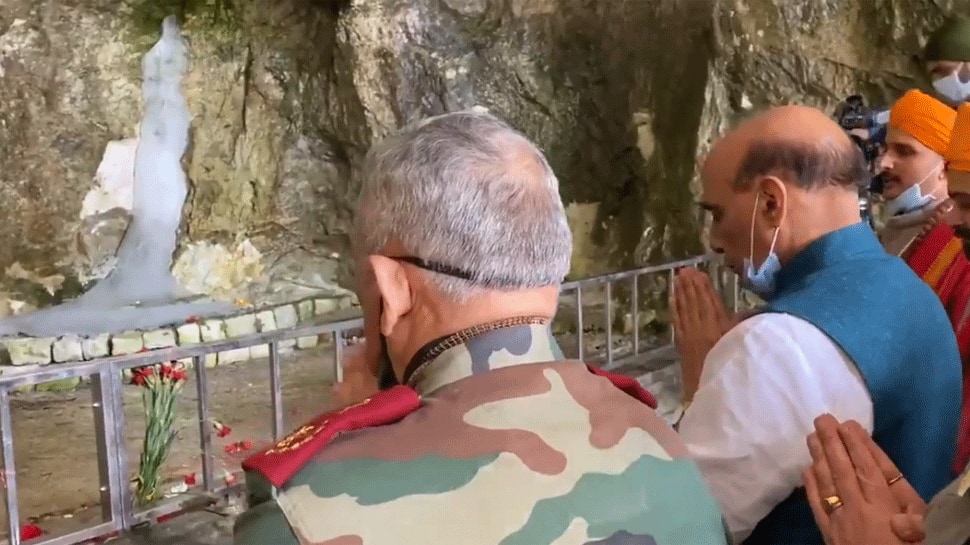 Srinagar: Union Defence Minister Rajnath Singh on Saturday (July 18) visited the holy cave of Amarnath where he offered his prayers. He was accompanied by Chief Defence Staff Bipin Rawat and Army chief MM Naravane during his visit to the shrine.

Rajnath spent about an hour at the temple complex there. His trip to the holy cave comes on the second day of his visit to Jammu and Kashmir.

The Amarnath cave is considered to be one of the holiest shrines in Hinduism and hundreds of thousands of devotees make an annual pilgrimage to it across challenging mountainous terrain.

On July 17, Rajnath reviewed the overall security scenario in Jammu and Kashmir with the top military brass. During his interaction with Jawan, he asked the armed forces to give a fitting reply to any misadventure by Pakistan. At a high-level meeting, the defence minister asked the armed forces to maintain a strict vigil along the Line of Control (LoC) with Pakistan.

Speaking of Amarnath temple, security forces in Jammu and Kashmir warned about receiving inputs about terrorists planning to target the holy pilgrimage. Army officials, however, asserted that systems and resources were in place to ensure that the annual pilgrimage goes unhindered.

"There are inputs that terrorists would try their best to target the yatra, but we have got our systems and resources in place to ensure that it goes on unhindered and peacefully," Brigadier Vivek Singh Thakur, Commander, Two Sector, said in a press conference in south Kashmir.

Brigadier Thakur said the stretch of national highway 44 which will be used by the yatris continue to remain sensitive.