The Ram Janmabhoomi complex has been placed under the red zone, the area outside the campus has been marked as a yellow zone and the rest of the Ayodhya is in the green zone. 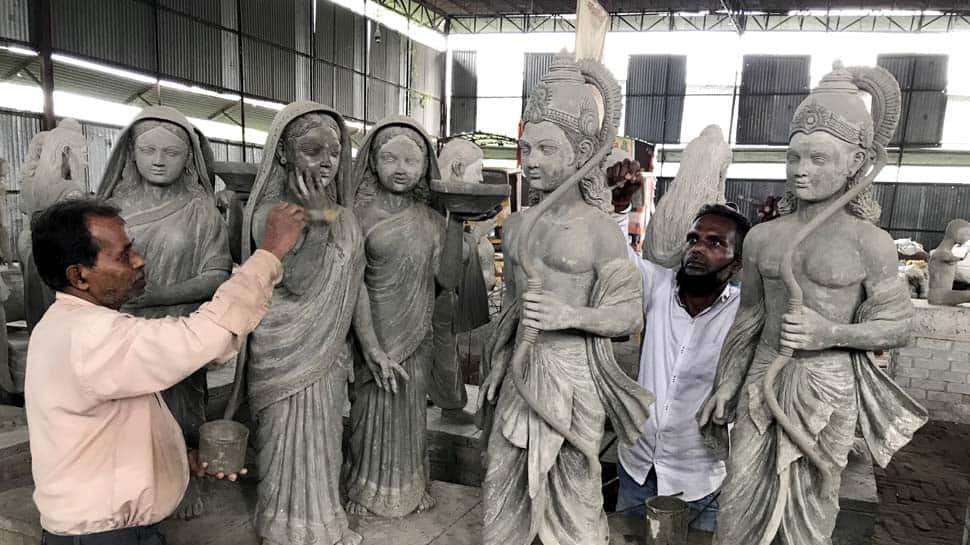 Ahead of the historic bhoomi pujan at Ram temple, the security has been tightened in Ayodhya with over ten thousand security personnel stationed in the temple town. The security in Ayodhya has been divided into three zones--red, yellow and green.

The Ram Janmabhoomi complex has been placed under the red zone, the area outside the campus has been marked as a yellow zone and the rest of the Ayodhya is in the green zone.

The Central Reserve Police Force (CRPF), PAC, Uttar Pradesh Police, and the Black Cat Commandos of the UP Police have been entrusted with the security.

On August 5, the Prime Minister Narendra Modi is scheduled to lay the foundation stone of Ram Janmabhoomi in Ayodhya. Along with PM Modi, prominent saints, some Sangh officials and other famous names associated with the Ayodhya Ram Temple movement will be present for the bhoomi pujan of the Ram Temple.

The intelligence agencies sources have revealed that Pakistani spy agency ISI is planning to carry out a terrorist attack in Ram Janmabhoomi on August 15. According to intelligence agency R&AW, the ISI was training Lashkar and Jaish terrorists in Afghanistan to launch the attack. The Pakistani agency had planned to send three to five groups of terrorists in Ayodhya for the attack.

Indian intelligence agency revealed that Pakistan wants the terrorist group to carry out separate attacks and in such a way that it appears as an internal attack within India.

The intelligence agency has also found that the VVIPs will remain on the target of the terrorists so that the impact of this attack is felt at large. Meanwhile, the security system has been tightened to keep a check on the activities in Delhi, Ayodhya, and Kashmir.

As the holy city Ayodhya gets ready to begin the construction of the Ram Temple, it is also getting a massive makeover as several developmental works are either underway or been proposed in the near future. The city makeover will include the construction, extension, and widening of roads and bypasses, development of a 600-acre township, along with setting up a sewage treatment plant.

Recently, Uttar Pradesh Chief Minister Yogi Adityanath had said that the ancient holy town of Ayodhya will be developed as the 'pride of India and the world'.

Here are the complete details of the development projects:

- A Rs 210 crore proposal has been passed for widening and beautification of one of Ayodhya city's main roads that connect Sahadatganj with Naya Ghat. This stretch is around 13.30 km long.

- The National Highway 27 road leading to Ram temple will be widened. Over 400 shops on the stretch will also be shifted to Ayodhya's Terhi Bazar and Community Center premises.

- The road from Terhi Bazaar to Asharfi Bhawan via post office will also be extended by 2.60 km at a cost of Rs 4.26 crore.

- A new 500-meter road from the Asharfi Bhavan to International Media Center will be constructed. The project will cost Rs 2.75 crores.

- Roads around the Ram temple will be repaired and there are also plans to build new roads.

- A bypass from Sohawal in Ayodhya to Vikramjot in Basti via Nawabganj of Gonda will be constructed.

- A 1.5 km long four-lane road will be constructed that will connect Ram temple to the airport. The project will reportedly cost Rs 18.75 crore.

- A 600-acre township will be developed in the Shahnazpur village that lies on the Lucknow-Gorakhpur highway.

- There will be extension and repair work the 4 km road from Udaya Chauraha to Golhar on the Panchkosi route which will cost around Rs 25.35 crore.

- The road from booth number 4 in Ayodhya to Hanuman cave via Ramghat intersection will be extended by 4.50 km. This will cost over Rs 10.85 crore.

- A sewage treatment plant will also be set up that will cost over Rs 363 crore.

- A 165 km-long sewer line will also be built in Ayodhya.

- Naya Ghat intersection will be widened and beautified at a cost of Rs 4.90 crore.

- Work on Bhajan Sandhya Sthal in Ayodhya has started in 2016 which is a Rs 19 crore project.

- Ram Katha Park to be expanded and a Ram Katha Gallery is also being made at a cost of Rs 7.5 crore.

- A New bus depot is being built in the city at a cost of Rs 7 crore.

- A project is proposed of a multipurpose hall in Digambar Arena that will cost Rs 2.75 crore.

- Pavements across the streets in Ayodhya are being built at a cost of Rs 8.38 crore.

- Proposal for development of Laxman Kila Ghat that will reportedly cost Rs 9.73 crore.

- A Press Club is also being constructed in Ayodhya.

- An international Ram Leela centre is under construction in the city.

- Bharat Kund will also be renovated.