Several students gathered outside the old Delhi Police Headquarters on Sunday (December 15) to protest the use of force by Delhi Police after anti-Citizenship Act protests at Jamia Nagar in Delhi turned violent. 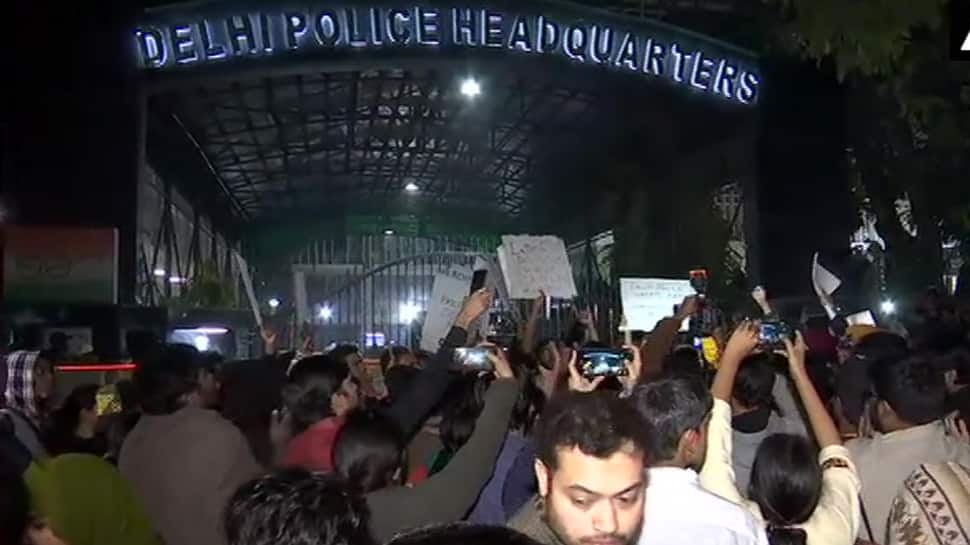 Several students have gathered outside the old Delhi Police Headquarters to protest the use of force by Delhi Police after anti-Citizenship Amendment Act protests at Jamia Nagar in Delhi turned violent on Sunday (December 15). The protesters were heard raising anti-police slogans and demanded action against the policemen who lathi-charged the protesters.

Talking to media, Chinmoy Biswal, Delhi Commissioner of Police South East, said that a mob of around 2,000 people turned violent and targeted public transport buses. Biswal added that the protesters resorted to stone-pelting and around six policemen have been injured. "This mob was violent. Around 6 policemen have been injured in the stone-pelting. We are yet to ascertain the identities," Biswal said.

Defending the police action to resort to lathi-charge on the protesters, the senior Delhi Police official said that the policemen were only trying to push the mob back in order to restore law and order in the area. Biswal stressed that the police did not target any students of Jamia Millia Islamia.

The Vice-Chancellor of Jamia, Najma Akhtar, has condemned police action saying police entered inside the campus without permission and beat up some students and university staff.

"Police couldn't differentiate between the protesters and students sitting in the library. Many students and staff were injured. There was so much ruckus that Police couldn't take permission. I hope for peace and safety of our students," said the Jamia VC.

Talking to ANI, Father George PA, spokesperson of Holy Family Hospital, said that about 26 JMI students who suffered minor injuries were admitted to hospital with injuries and most of them have been discharged now. He added that two police personnel have also been admitted with head injuries.

Delhi Deputy Chief Minister Manish Sisodia has tweeted that all schools in Okhla, Jamia Nagar, New Friends Colony and Madanpur Khadar will remain closed on Monday (December 16) due to the tense situation.

Meanwhile, AIMIM chief Asaduddin Owaisi has come out in the support of Jamia students, saying that Delhi Police must release all the students in police custody. He also demanded that the police must reveal the number of students who got injured in lathi-charge. The AIMIM chief said that an independent judicial inquiry should be set up to investigate the incident.

"In solidarity with Jamia Milia right now. @DelhiPolice should release all the students in police custody & tell us the number of students injured due to police brutality. An independent judicial inquiry should be set up to investigate into the incident," tweeted Owaisi.

Meanwhile, rotests also broke out at Aligarh Muslim University with several students coming out on campus to protest against the amended Citizenship Act. The agitating students clashed with police at one of the gates of campus forcing the police to use batons and teargas to bring things under control. The AMU administration has declared winter vacations today onwards and the university will reopen on January 5.