Thousands of Delhi police personnel and their families staged a day-long protest on Tuesday outside the Delhi Police headquarters at ITO against the assault on some of their colleagues by lawyers at the Tis Hazari court premises and outside Saket court last Saturday and on Monday. 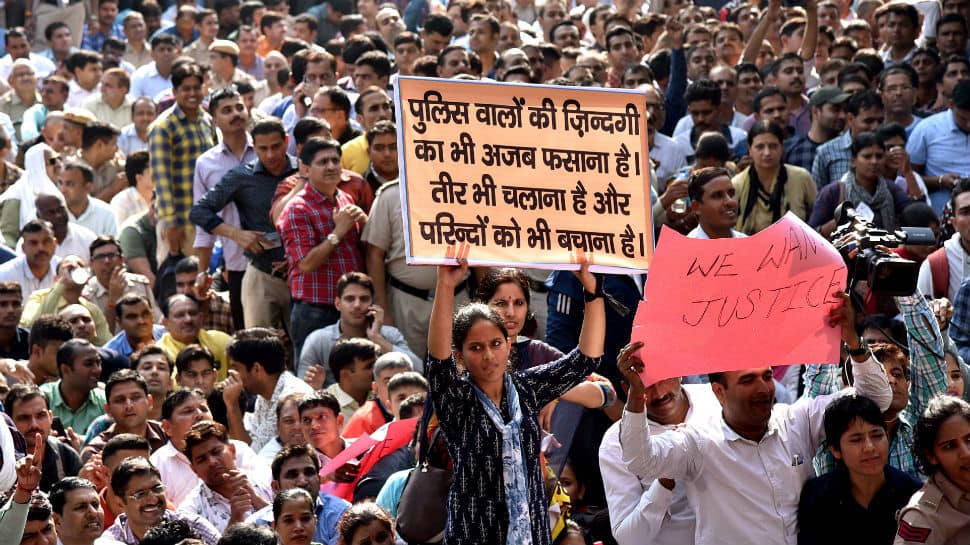 New Delhi: A Supreme Court lawyer, Varun Thakur, has sent a legal notice to the Delhi Police Commissioner, Amulya Patnaik, for not taking action against the police personnel and their families holding a massive protest outside the headquarters on Tuesday.

Thakur has termed the demonstration as "illegal" and "irresponsible" and said that such an action is "dangerous for a democratic country."

"Such an illegal demonstration and irresponsible activities of your police forces is the clear violation of Section 3 (1) (a) (b) (c) and 3(2) of The Police Forces (Restriction of Rights) Act 1966. Section (3) prohibits the Police Forces to participate in any demonstration, communicate with the press for their own demands, but the whole day such illegal activities at public places were seen. Such an irresponsible behaviour of the police forces, muscles and power by demonstrating at a public place, creating fears in the society, is very dangerous things for our democratic country," the legal notice stated.

He has sought immediate action against the police personnel who took part in the protest, otherwise, he would approach the court.

Thousands of Delhi police personnel and their families staged a day-long protest on Tuesday outside the Delhi Police headquarters at ITO against the assault on some of their colleagues by lawyers at the Tis Hazari court premises and outside Saket court last Saturday and on Monday.

Chants of "we want justice", and "hamara CP (Commissioner of Police) kaisa Ho, Kiran Bedi jaisa ho" reverberated outside the headquarters as their seniors tried to pacify them. Delhi Police Commissioner Amulya Patnaik also addressed the protesting cops but was booed by them.

The protest was called off after 11 hours after seniors assured the cops that most of their demands would be met.

Addressing the agitating cops at the Police Headquarters, Special Commissioner Satish Golcha said, "We will provide the best treatment to the cops injured during the clashes and also give an ex-gratia of Rs 25,000 each to the injured cops."

He also said that a case has been registered in the Saket Court incident, in which a lawyer was seen assaulting a policeman on Monday.

"I request you all to end the agitation as a disciplined force. I want to assure you on behalf of our Commissioner (Amulya Patnaik) and request you to join your duties," he said.

Later, in an interview to news agency ANI, Patnaik said, "All concerns of our police personnel have been taken up at an appropriate level. Further actions will be taken. Senior officers will ensure that justice is done."

A clash had broken out between lawyers and cops over an alleged parking issue at Tis Hazari court, in which several police officials and lawyers were injured. A total of around 20 police personnel including Additional Deputy Commissioner of Police (North), two Station House Officers (SHOs) and eight lawyers sustained injuries in the incident.

On Monday, a Delhi Police constable was beaten up by lawyers at the Karkardooma Court and they also misbehaved with a woman journalist and later in the day, a policeman was thrashed by lawyers outside the Saket Court.