Tejashwi Yadav, who turned 30, drew flak from his detractors by posting photos of him on social media in which he can be seen cutting a cake and drinking tea on board a chartered plane. 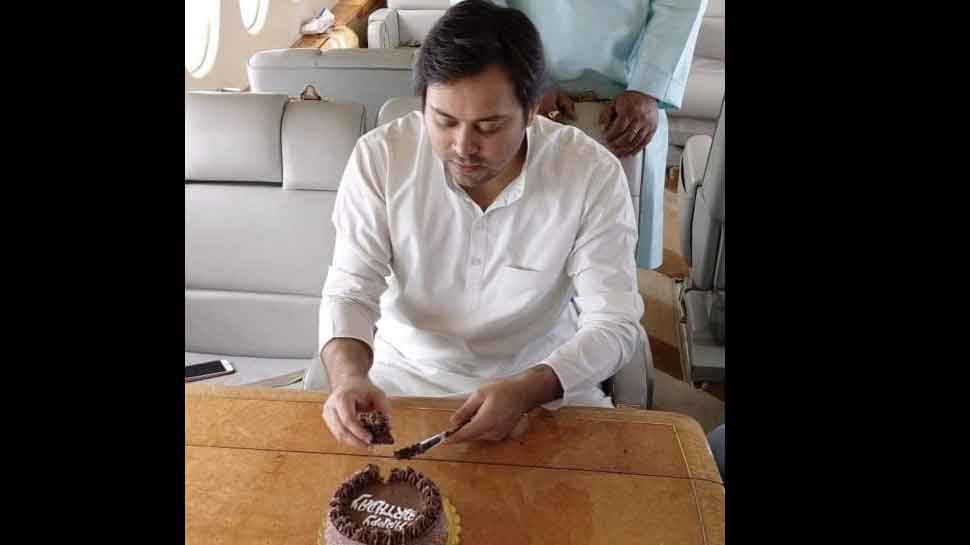 A day after facing heavy criticism for celebrating his birthday on a chartered plane, RJD leader and former Bihar deputy chief minister Tejashwi Prasad Yadav on Tuesday responded to his critics, claiming that some people were finding it tough to accept the fact that a milkman was having tea in a private plane.

Tejashwi, who turned 30, drew flak from his detractors by posting photos of him on social media in which he can be seen cutting a cake and drinking tea on board a chartered plane. The RJD heir apparent was questioned by many for celebrating his birthday in such a lavish way.

"Some are wondering how a milkman can have tea on a plane. This is an allegation being levelled on me. I get disturbed after seeing some people worrying about me. Unfortunately, their masters (murshid - the one who shows the right path) are not happy with them," he tweeted in Hindi.

"I eat guava, corn, bhunja, chat (snacks) on roads and kebab on plane. However, it seems, someone else is having a stomach ache," the RJD leader added.

Tejashwi was trolled by several Twitter users for the birthday celebrations on the plane who said it was ironical as he was considered the "leader of the poor" in Bihar. Some also criticised him for celebrating his birthday in such a way while his father Lalu Prasad Yadav was lodged in jail.

"#tejashwiyadav hope you had a great time celebrating your birthday in private jet while your dad is having his meal in jail," said a Twitter user, while another user said, "Who said Bihar is a poor state? Birthday celebration of Tejashwi Yadav, son of Lalu, in a private jet."

In some of the pictures, Yadav is seen with his close aides Sanjay Yadav and Mani Yadav and Lalu Yadav's associate Bhola Yadav. However, when and where these pictures were clicked is not yet known.

Kerala police to deploy over 10,000 security personnel in Sabarimala Temple for Mandala Pooja