Terrorism common concern, will co-operate with India in dealing with it: Saudi Arabia

Saudi Arabia and India on Wednesday agreed to deal with terrorism collectively. 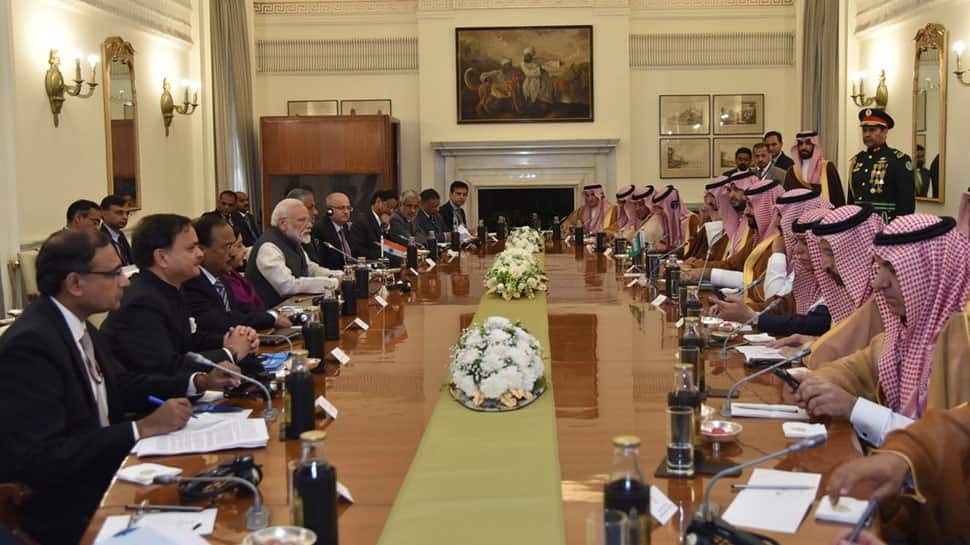 NEW DELHI: Saudi Arabia's visiting Crown Prince Mohammed bin Salman on Wednesday said that terrorism and extremism are a "common concern" and pledged to help India in dealing with it.

The visiting Saudi Arabia leader said that his country will "cooperate with India and neighbouring states" on the matter.

"The common concern is terrorism and extremism. We will cooperate with India and neighbouring states to ensure future generations are safe. We applaud India's role in this matter," Saudi Arabia's Crown Prince Mohammed bin Salman said.

Saudi Arabia, he said, will help India on this front through intelligence sharing.

Salman made these remarks while addressing a joint press conference with Prime Minister Narendra Modi.

Speaking on his turn, PM Modi said, ''We have agreed that terrorism should not be supported in any form, and we should put pressure on countries who back terror. To end terror infrastructure, ending support to terror groups and punishing them is essential... I'm glad Saudi Arabia agrees with India on this."

"We discussed all aspects of our bilateral ties today and have decided to take our relations to new heights," PM Modi said in his statement.

Prior to the joint press statement, the two sides confirmed the signing of five Memorandum of Understanding agreements, including infrastructure, housing, cooperation on broadcasting and the enhancing bilateral investment relations,'' said the joint statement issued by the two sides.

The bilateral talks between the two leaders were held in the shadow of escalating tension with Pakistan over last week's Pulwama terror attack, in which 40 soldiers were killed by a suicide bomber of Pakistan-based Jaish-e-Mohammed.

"Relations between India and the Arabian peninsula is in our DNA," Saudi Crown Prince Mohammed bin Salman had told reporters this morning, in the backdrop of criticism in India of his Pakistani visit.

PM Modi broke with government protocol to personally welcome the Saudi Prince; he was seen wrapping the 33-year-old in his signature bear hug by the steps of the Prince's plane.

During his high-profile visit to Pakistan, the Crown Prince declared his decision to invest 20 billion dollars in the country and also praised Islamabad’s ‘efforts for regional peace and security’. Further, he said that dialogue was the only way to resolve the ‘outstanding issues’ between India and Pakistan.