There is Modi wave in this election too, Congress will have to wait for at least five years: Amit Shah at India Ka DNA

"There were a lot of expectations and I believe that we have met them. In some cases, we have exceeded the expectations," Amit Shah said 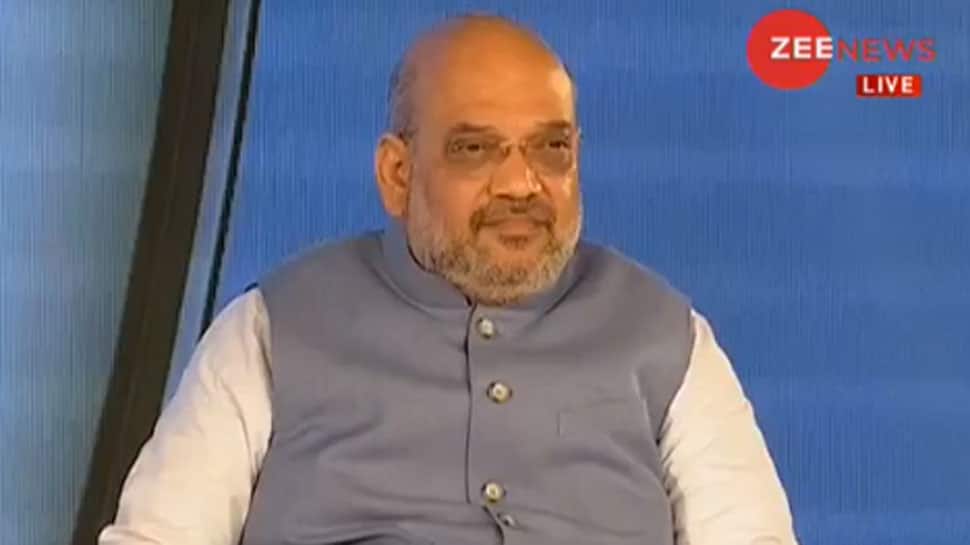 New Delhi: BJP president Amit Shah was the main guest at Zee News' India Ka DNA conclave on Monday in New Delhi. The BJP president talked about the achievements of the government under the leadership of Prime Minister Narendra Modi, the Modi wave in the upcoming election and why he thinks that Congress will not come to power in 2019.

He started his session by saying that every election is a challenge for BJP and the party workers do not take any election lightly. Amit Shah stressed that there is a Modi wave in this election too and because of the decisive leadership of prime minister Modi, the entire world is looking towards India.

"There were a lot of expectations and I believe that we have met them. In some cases, we have exceeded the expectations. Modiji monitored all the work and now the entire world is looking towards India. The value of Indian passport has increased in the last five years," he said.

For Congress, he said that the party will remain out of power for at least five more years and added that this time, winning from Amethi parliamentary constituency will be difficult for Congress president Rahul Gandhi. The BJP has fielded Union Minister Smriti Irani against Rahul Gandhi from Amethi.

"I am confident we will get the mandate in this election too and in 5 years India will be a strong power," he said.

Speaking about the 'biggest change' the Modi government has brought during the tenure, he said that it about vote bank. "The biggest change that has taken place is that earlier it was believed that vote bank is a personal property of some leaders, but now the voter thinks independently and casts it accordingly," Shah elaborated.

Adding more to that, Shah said, "Pulwama attack timing was not decided by the government. It was carried out by Pakistan-supported terrorists. Should we have waited for elections to counter-attack? We will give a befitting reply to the terror attack."

"Narendra Modi's personality is about taking tough and quick decisions. India is the third country after USA and Israel to avenge the attacks on its soldiers," he said.

"Chaiwala was used to mock Narendra Modi. Those who live in ivory tower have no idea of what is happening on the ground. Since Modiji was abused, the entire country came forward and declared that we are also chowkidar," he added.

Of the Ram Mandir issue, he said, "It is in the court. I hope it will be resolved soon. Article 35A is stuck in Rajya Sabha and by 2020, BJP will have majority there too.

Highlighting the difference between BJP and Congress, the BJP president said that Congress "gives slogans while BJP works."

"Congress slogan has not changed in 55 years. They are still talking in the same language as Jawaharlal Nehru's. We have provided electricity, Ayushman Yojna, toilets, houses for the poor. Congress gives slogans while BJP works," he said.

"Congress and BJP have direct contest in 33 per cent of the country and there are other opponents in 66 per cent. I am a small person compared to Rahul Gandhi," Shah added.

He named West Bengal, Odisha in particular where the party has to improve its performance. "We are seeking votes based on our performance," he said while adding, "In this election, Mamata Banerjee will realise the power of the voter."

Shah also shared his views on Mahagathbandan and said that there's no synchronisation among its constituents and added that these 'alliances do not last.' He also spoke about  SP-BSP and denied saying that it will 'hurt the BJP.'

"We need to be careful, that is what we are doing. We won 73 in 2014 and then in 2017, BJP won 325 seats. In 2017, SP and Congress came together but could not do anything.SP and BSP alliance have a vote share, but we have got new voters who are backing BJP. Almost 4.11 crore people in UP have benefitted from central government's schemes. We have won many elections on the basis of work done by Narendra Modi," Shah said.

Amit Shah, who is also fighting the election from Gandhi Nagar constituency, also added, "In BJP it is the party which decides on a worker's role. I cannot decide what I will do. I have won MLA elections five times and now I am in Rajya Sabha. It is my good fortune that I am contesting Lok Sabha election now and my party has given me a work to do. am a booth level worker, I have pasted posters and worked for the party. I am satisfied with the post of BJP president."

In his message to BJP workers, he said that they need to work hard and ensure a massive mandate and majority. "Whatever may be the situation but under Modi's leadership our forces will achieve victory."

Of Omar Abdullah's comment that Jammu and Kashmir would one day have a separate Prime Minister and President, Amit Shah replied, "His dream of having a PM post in Kashmir will remain in dream whether we are in power of the opposition."

Of the Doklam issue, he said, "India looked  into the eyes of China during Doklam."

Shah blamed Jawaharlal Nehru's policies for the Kashmir problem and further said, "BJP formed a government in J&K with PDP as per the wishes of the residents of the state. It was working fine but when there were question marks on security, BJP immediately pulled out and the government fell."

"BJP never brought an impeachment motion, it was the Congress which did so. They imposed Emergency. Now they are preaching us," he added.

Towards the end, he mentioned about Congress coining Hindu terror for vote bank. "Congress released terrorists and was soft on them. There is no Hindu terror and today, the world is talking about Pakistan-sponsored terror. That is BJP's achievement."

"Rahul Gandhi spoke about Hindu terror to the American envoy. He said Lashkar-e-Taiba is not a problem, Hindu terror is," Shah added.

"The mood of the nation is that Modi will be the PM again. In 2022, when we will celebrate 75 years of independence, every family will have a house, every house will have a toilet. BJP will register a massive mandate in this election.BJP workers will go to every house and ensure a massive win. Modiji will decide what is the agenda and we will stand rock solid with him," Amit Shah concluded.

North, central India to be warmer than normal from April to June: IMD