There is no India without Hindus, no Hindus without India: RSS chief Mohan Bhagwat

“Hindustan is a Hindu Rashtra and its origin was Hindutava. Hindus are inseparable from Bharat and Bharat is inseparable from Hindus," the Rashtriya Swayamsewak Sangh chief said while addressing a function here in Madhya Pradesh. 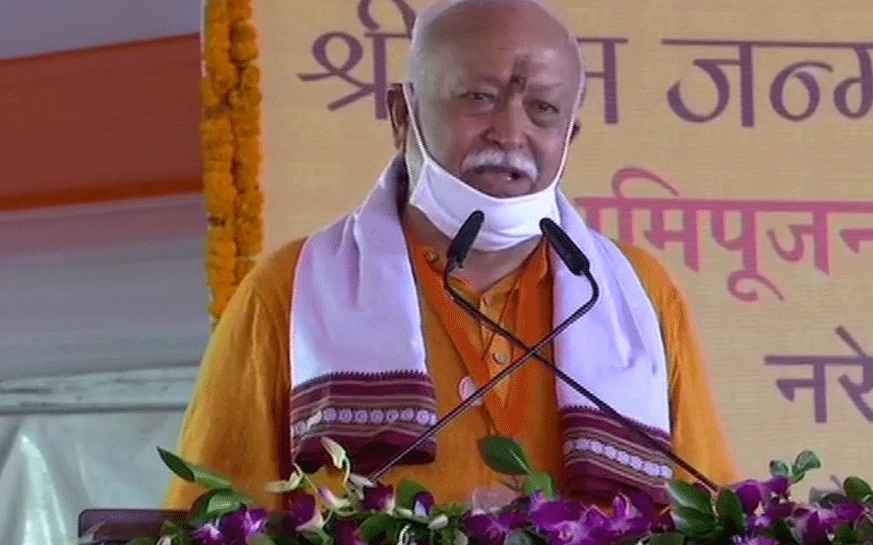 Gwalior: RSS chief Mohan Bhagwat on Saturday has said "Hindustan" (India) is a Hindu nation whose origin was Hindutva and that Hindus and Bharat are inseparable. He also said if Hindus want to remain Hindus then Bharat has to be made "akhand" (undivided).

“Hindustan is a Hindu Rashtra and its origin was Hindutava. Hindus are inseparable from Bharat and Bharat is inseparable from Hindus," the Rashtriya Swayamsewak Sangh chief said while addressing a function here in Madhya Pradesh.

He also said Bharat has to remain Hindu if it has to maintain its identity, and Hindus have to make it "Akhand" (undivided) if they want to remain Hindus.

“History is a witness that whenever Hindus forgot this 'bhav' (identity) the country faced a crisis and it broke but now (Hindu) revival is happening and Bharat's prestige is growing globally. The world is looking at India and for this, all sections of the society should work,” he added.

The RSS chief said that Hindus and Bharat are inseparable. "If Bharat has to remain Bharat it has to remain Hindu and if Hindus want to remain Hindus then Bharat must be made 'Akhand' (undivided). This is Hindustan where Hindus are living and following traditions. Whatever that is called 'Hindu' is developed in this land,” he added.

Bhagwat further said there is no Bharat without Hindus and no Hindus without Bharat. “Bharat was divided and Pakistan was born because we forgot that 'bhav' (identity) that we are Hindus. And this was forgotten by Muslims too. The British broke our Hindutava identity and divided it based on language and religion,” he added.

"....They could have said that Vedas originated from here and the Sindhu, from where 'Hindu' (word) was originated, is there. But if you say Bharat then Hindustan is implied. And people living in the 'Akhand' Bharat know this. They said the number of Hindus reduced and then the 'bhav' of Hindutva but now this 'bhav' has to be maintained," he added.

The RSS chief arrived here on Friday midnight to address and guide a four-day Ghosh Shivir (musical band camp) of the Sangh. The camp has been held at the Saraswati Shishu Mandir on Shivpuri link road since Thursday.