Here are some high-profile cases that made Ram Jethmalani one of India's most sought-after criminal lawyers. 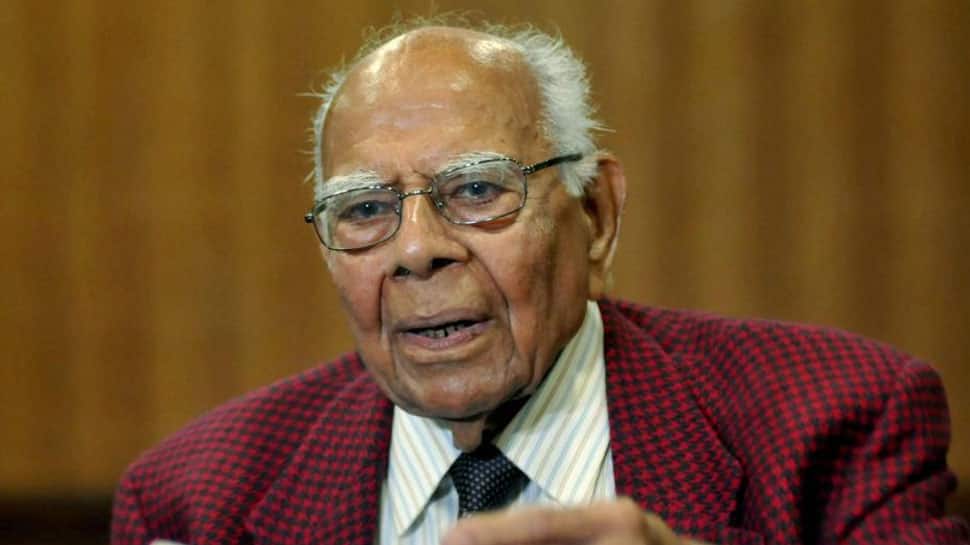 NEW DELHI: Noted criminal lawyer and former Union minister Ram Jethmalani died at his residence in the national capital on Sunday morning. He was 95.

One of the highest-paid lawyers of the country, Jethmalani served as the Law Minister and the Urban Development Minister in the former PM Atal Bihari Vajpayee's cabinet. He had also served as the Chairman of Bar Council of India. Born in Sindh on September 14, 1923, Jethmalani had obtained a law degree when he was just 17 and started practising law in Karachi until Partition, according to his official website.

As a lawyer, Jethmalani often grabbed headlines for representing those who were caught on the wrong side of the law. His illustrious career was marked by several high-profile cases and run-ins with some of the most powerful people in the country. As a top criminal lawyer of the country, Jethmalani was known for his techniques of cross-examination of witnesses in the courtroom.

He represented those involved in the assassination of former prime minister Rajiv Gandhi and later Manu Sharma in the Jessica Lal murder case.

Apart from these, the controversial lawyer also defended Harshad Mehta and Keran Parekh in the multicrore share markets fraud case.

In India, where he moved in February 1948 after riots broke out in Karachi, he fought his first case in Bombay High Court against a law passed by the Chief Minister of the-then Bombay State, Morarji Desai. The said law treated refugees in a manner similar to convicted prisoners. In Bombay HC, he asked that the law be declared unconstitutional, and won the case.

Jethmalani’s spectacular journey as a lawyer began in the 1950s when he became involved in the famous Nanavati murder case of 1962 - a love-triangle where a naval officer was tried for the murder of his wife’s alleged lover.

Though Jethmalani wasn’t representing either one of the sides, he was hired by Mamie Ahuja, sister of Prem Ahuja, the man who had been shot dead, to look after the interests of her brother. He was part of the infamous KM Nanavati vs State of Maharashtra case along with Yashwant Vishnu Chandrachud, who later served as the Chief Justice of India from 22 February 1978 to 11 July 1985.

A young Naval officer, Kawas Nanavati, shot dead his wife Sylvia’s paramour, Prem Ahuja, after discovering that he had no intention of marrying her or accepting their children as his own. The case was among the first to be put to a media trial and the last to be decided by a jury.

Jethmalani assisted the Public Prosecutor in framing the arguments first in the trial court and then later in the High Court. His strategy and line of cross-examination ensured that Nanavati was held guilty.

However, when the conviction became a rallying point for the Parsi and the Sindhi community, to which Ahuja belonged, Jethmalani stepped in and convinced Ahuja’s sister, Mamie Ahuja, to write a letter forgiving her brother’s killer. This case was a turning point for him which later established him in the erstwhile Bombay where he had moved from Karachi after Partition.

On the night of 25 June 1975, the then Prime Minister Indira Gandhi declared an Emergency. The government, in its attempt to exercise absolute control, passed the Maintenance of Internal Security Act (MISA) to make arbitrary arrests. Hundreds of political activists and journalists were either jailed or put under house arrest without any explanation or legal recourse.

A team of 12 lawyers, led by Shanti Bhushan, challenged the unlawful detentions in the Supreme Court. This came to be called the Habeas Corpus case. Jethmalani was one of those lawyers who argued before the top court if fundamental rights, like the right to life, stood abrogated during a state of Emergency.

In a stunning verdict, the Supreme Court favoured the Centre with only one of five judges dissenting against the majority ruling.

Former PM Indira Gandhi’s assassination by her personal security guards was widely believed to be an open and shut case. But it Jethmalani, who made the majority to think otherwise. He decided to defend the accused – Balbir Singh and Khehar Singh – after they requested him to represent them.

Jethmalani successfully proved that the link between Balbir Singh and the two Sikh guards who shot down the Prime Minister was tenuous. But, he could not save Khehar Singh, who was sentenced to death.

Jethmalani sprang yet another surprise when he argued for commuting LTTE operative Murugan’s death sentence in the Rajiv Gandhi assassination case on the grounds that he had spent more than 23 years in prison, and if the remissions earned were to be taken into account, the period of incarceration would be over 30 years.

During the course of the hearing against the Centre’s petition challenging the Tamil Nadu government’s decision to commute the sentences of the convicts, Jethmalani told the Supreme Court that the 21 May 1991 suicide bomb attack, which killed Rajiv Gandhi, was not a crime against India.

When the Harshad Mehta stock market scam was unearthed in 1992, it is understood to have catapulted the status of Mumbai-based lawyers. Harshad and his brothers hired Ram Jethmalani to defend them after nearly 70-odd criminal cases were lodged against the Mehta family. The Harshad Mehta case also probably marked the beginning of serious money coming into the legal profession.

Besides these, Jethmalani appeared in many high profile cases like defending the death sentence given to Afzal Guru - the 2001 Parliament attack case convict - and representing Manu Sharma, the prime accused in high-profile Jessica Lal murder case.

He also appeared as a defence lawyer for BJP stalwart LK Advani in the hawala case, for Jayalalithaa in the disproportionate assets case, for Kanimozhi in 2G scam trial, for RJD chief Lalu Prasad Yadav in the fodder scam case, for BS Yediyurappa in the mining scam case among several others.