Eminent lawyer and former union minister Ram Jethmalani died at the age of 95 on Sunday. 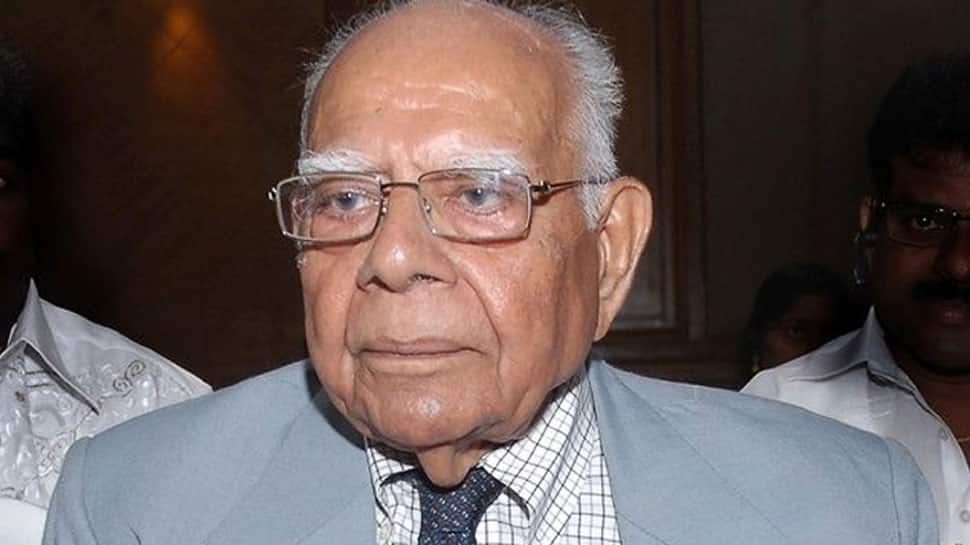 New Delhi: Eminent lawyer and former union minister Ram Jethmalani died at the age of 95 on Sunday at his Delhi residence. The veteran lawyer was suffering from a prolonged illness and is survived by his son and a US-based daughter.

Prime Minister Narendra Modi, in a series of tweets, condoled the death of senior Supreme Court lawyer. Calling him an "exceprional lawyer" and "iconic public figure", PM Modi said Jethmalani was "witty, courageous and never shied away from boldly expressing himself on any subject."

Speaking about the time of the Emergency, PM Modi said that Jethmalani's "fortitude and fight for public liberties will be remembered." PM Modi added that he considered himself "fortunate to have got numerous opportunities to interact with Shri Ram Jethmalani Ji".

One of the best aspects of Shri Ram Jethmalani Ji was the ability to speak his mind. And, he did so without any fear. During the dark days of the Emergency, his fortitude and fight for public liberties will be remembered. Helping the needy was an integral part of his persona.

After his demise, Delhi Chief Minister Arvind Kejriwal tweeted, "Extremely saddened at the passing away of legendary lawyer Ram Jethmalani ji. An institution in himself, he shaped criminal law in post-independence India. His void would never be filled and his name will be written in golden words in legal history. RIP Ram sir."

Extremely saddened at the passing away of legendary lawyer Ram Jethmalani ji. An institution in himself, he shaped criminal law in post-independence India. His void would never be filled and his name will be written in golden words in legal history.

Born in Shikharpur, in the Sindh province on September 14, 1923, Ram Jethmalani was one of the highest-paid lawyers of the country, and also served as the Law Minister and the Urban Development minister in the Atal Bihari Vajpayee cabinet. He had also served as the Chairman of Bar Council of India.

Jethmalani’s career has been marked by high-profile cases and run-ins with some of the most powerful people in the country. Known as a criminal lawyer, particularly his techniques of cross-examination of witnesses, Jethmalani repeatedly proved his mettle in the court-room, making him one of the highest-paid lawyers in the country. Jethmalani had a minor fallout with the Bharatiya Janata Party (BJP), against which he contested Lok Sabha elections of 2004 from Lucknow constituency. However, the veteran lawyer returned to BJP in 2010 and was elected to Rajya Sabha on its ticket from Rajasthan.

As a lawyer, Jethmalani often grabbed headlines for representing the unpopular parties. He represented those involved in the assassination of former prime minister Rajiv Gandhi and later Manu Sharma in the Jessica Lal murder case. Apart from these, the controversial lawyer also defended Harshad Mehta and Keran Parekh in share markets fraud case.

On May 7, 2010, Jethmalani was elected as the president of Supreme Court Bar Association. Ram Jethmalani's litigating prowess was recognised by the world. In 1977, he received the Human Rights Award instituted by World Peace Through Law for his fight against authoritarianism at the Philippines.

After pursuing legal profession for more than 75 years, Jethmalani had announced his retirement two years back. He had, however, appeared in person before a bench of Chief Justice of India after the Karnataka Assembly elections 2018, stating that he wished to make a mention over the then political situation in the southern state.