Akhilesh Yadav along with two other senior ministers of Samajwadi Party sat on a dharna outside Uttar Pradesh Vidhan Sabha on Saturday protesting in support of the Unnao victim.

Speaking to ANI, Akhilesh said, "This is an extremely condemnable incident. This is a black day. It is not the first such incident under this BJP government. CM (Yogi Adityanath) had said in this very assembly, 'apradhiyon ko thok diya jayega', (but) they could not save the life of a daughter.

Akhilesh Yadav,Samajwadi Party: Till the day Uttar Pradesh Chief Minister, state Home Secretary and DGP don't resign, justice will not be done. Tomorrow we will conduct a shokh sabha in all districts of the state over Unnao rape case. https://t.co/Fzs93kW08W pic.twitter.com/HZkGIDCVLn — ANI UP (@ANINewsUP) December 7, 2019

Congress leader Priyanka Gandhi also left for Unnao from Lucknow on Saturday to meet and extend condolence to the family of the rape victim.

Priyanka too attacked the UP government claiming that law and order in the state has deteriorated completely. "It is a failure of all of us that we could not give her justice. Socially, we are all guilty, but it also shows the law and order situation in Uttar Pradesh," she said. She questioned as to why atrocities on women were rampant in the state and given the previous incident in Unnao, why no protection was given to the victim. "Keeping in mind the previous incident of Unnao, why did the government not give immediate protection to the victim? What action was taken against the officer who refused to register her FIR?" 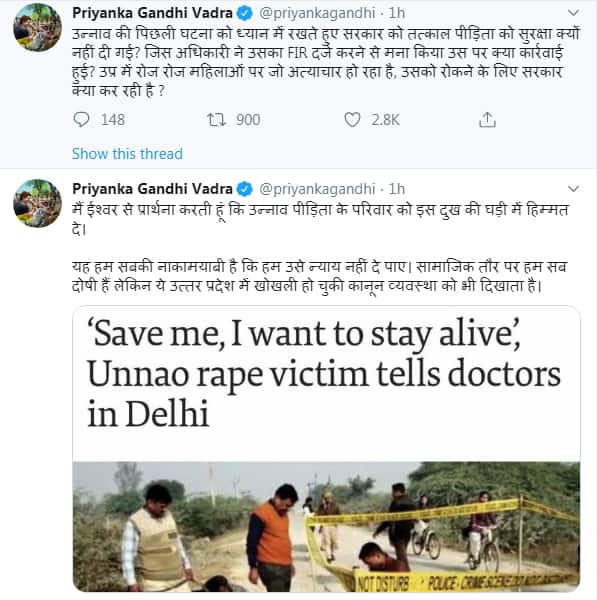 The 23-year-old was allegedly set ablaze while she was on her way to a local court hearing in the rape case which she had filed in March earlier this year. The five accused, who were out on a bail, attacked her near a village intersection and set her ablaze after pouring kerosene on her. She suffered 90 per cent burns and was later airlifted to Delhi`s Safdurjung hospital for treatment.

On Friday, the victim succumbed to her injuries at the Safdurjung hospital. According to the doctor, she suffered a cardiac arrest and while the doctors tried to resuscitate, they failed to save her.