This is the second visit of Pompeo to India. He was in India in 2018 for the maiden 2+2 dialogue between defence and foreign ministers of US and India. 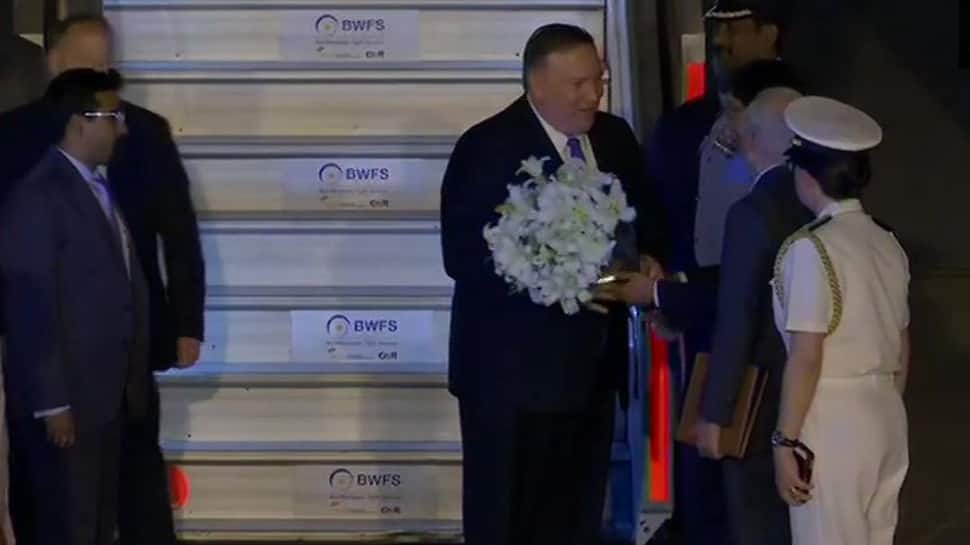 New Delhi/Osaka: In the first high profile visit from the US since Prime Minister Narendra Modi has taken charge for the second term, US Secretary of State Mike Pompeo arrived in Delhi on Tuesday evening for his three-day visit. This is the second visit of Pompeo to India. He was in India in 2018 for the maiden 2+2 dialogue between defence and foreign ministers of US and India.

The visit comes days ahead of PM Modi's meeting with US President Donald Trump in Osaka, Japan, on the sidelines of the 14th G20 summit and the 2nd JAI trilateral--Japan, America and India. The first JAI trilateral took place between Japanese PM Shinzo Abe, Trump and PM Modi in Buenos Aires, Argentina, in December 2018.

On Wednesday, the main day of engagement, he will meet PM Modi at 10 am followed by External Affairs Minister S Jaishankar at noon followed by press statements. He will also be making an "India policy speech" in the evening.

Calling the visit an important one, EAM speaking in Gandhinagar said, "We have a very positive approach for the meeting." On the ongoing crisis in the Gulf due to US-Iran tensions, EAM said, "We have a relationship with Iran and we have a relationship with the US....we will be guided by our national interest and that will be the yardstick of judgement."

India is concerned by the situation in the Gulf, especially with it large diaspora in the west Asian region. The Indian government says it has a strong and legitimate interest in maintaining stability and peace in the region and believes both Washington and Tehran should de-escalate and refrain from any action that can destabilise the region.

India will discuss the import of Iran oil with Washington. The US waivers on import of Iranian oil, after its sanctions, for all countries have been terminated by Washington. The geopolitical situation in the region, terror and Indo-Pacific region will be the focus areas. Trade remains an issue of contention as Trump called India a "Tariff King".

Along with trade, H1B visa, data localization or use and storage of data of Indian citizens, S-400 deal with Russia remains other contentious issues.

On S-400 deal, India has made it clear to the US, that it has long-standing defence relationship with Moscow which cant "be wished away" and a deal has been in discussion with Russia for a decade. New Delhi believes Trump administration has enough flexibility to give waiver under the American CAATSA law which imposes sanction on countries engaging in defence ties with Russia.

Also, with China-backed Huawei, which is feeling Washington's heat, New Delhi will be looking at its own security requirements and will take its own call but before that will hear concerns of other countries as well.