The BSP and SP will share 38 seats each out of the state's 80 parliamentary constituencies and keep the Congress out of the alliance. 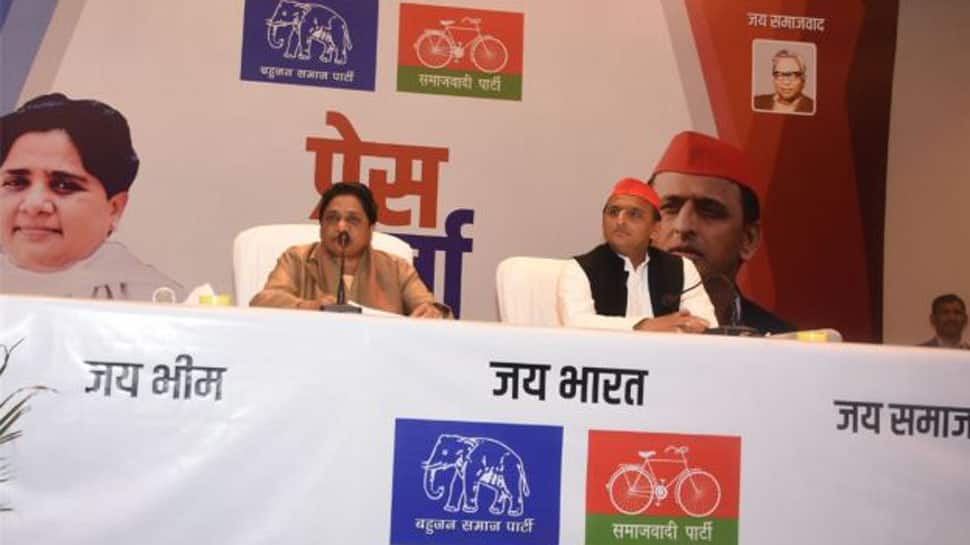 Hours after the once arch-rivals Samajwadi Party (SP) and Bahujan Samaj Party (BSP) announced on Saturday their tie-up in Uttar Pradesh for the 2019 Lok Sabha polls, leaders across political parties reacted to the decision. The announcement was made jointly by SP president Akhilesh Yadav and BSP chief Mayawati.

Speaking on the alliance, Uttar Pradesh Chief Minister Yogi Adityanath accused the coalition of being casteist, corrupt and of opportunistic mindset. He further added that the two political parties don't want development and good governance. Terming the alliance as 'unholy' and said they will get a befitting answer.

The CM said, "This is a coalition of casteist, corrupt and opportunistic mindset that doesn't want development and good governance. The public knows everything and this unholy alliance will be given a perfect answer."

The BSP and SP will share 38 seats each out of the state's 80 parliamentary constituencies and keep the Congress out of the alliance. However, the two parties said they will not field candidates in Amethi and Rae Bareli, represented by Congress president Rahul Gandhi and UPA chairperson Sonia Gandhi, respectively. But there have been talks with the Rashtriya Lok Dal.

Reacting to the development, Union Minister Ravi Shankar Prasad said the two parties had come together for their survival, and not for the country or the state. "They know they cannot fight Modi on their own and their opposition to him is the sole base for their alliance," Prasad told reporters on the sidelines of the party's National Council meeting in Delhi.

Taking a jibe at Mayawati and Akhilesh, Rajya Sabha MP Amar Singh called the duo 'bua' and 'babua' respectively. He pointed out that the founder of SP will always be Mulayam Singh who has been totally cut off with this development. He also said that on the banners, Mayawati, Mulayam Singh and Akhilesh won't be there together and it'll be only Akhilesh and Mayawati.

"Founder of Samajwadi Party will always be Mulayam Singh Ji. Now he is totally cut off with this development. On the banners, Mayawati, Mulayam Singh & Akhilesh won't be there together. It'll be only Akhilesh & Mayawati, 'bua & babua'," said Amar Singh.

Peeved over Mayawati's accusation that it was being run by the BJP, his party hit back at the BSP chief said everyone knew who had formed the government with the saffron party earlier. "The allegation against Shivpal is baseless. Everyone in the state knows who formed the government with the BJP, and which party sells a ticket and is involved in corruption. Shivpal's fight against communalism is four-decade-old," Pragatisheel Samajwadi Party (Lohia) chief spokesperson C P Rai said.

Mayawati asked the party cadre "to not waste their vote on his (Shivpal's) party, (which is) funded by the BJP". "The BJP's money will go down the drain as it is running Shivpal's party," she said, while Akhilesh Yadav did not say anything about the party floated recently by his feuding uncle.

Rai said Akhilesh Yadav should understand that the Bahujan Samaj Party (BSP) had earlier taken the votes of Dalits, Other Backward Class (OBC) and Muslims, and went with the Bharatiya Janata Party (BJP), adding "history can be repeated". "The SP workers were framed in fake cases during the BSP regime. The SP allied with the party which humiliated Mulayam Singh Yadav and Janeshwar Mishra. This is an alliance of opportunism. Any 'Samajwadi' will not accept it," he said.

West Bengal Chief Minister and Trinamool Congress (TMC) supremo Mamata Banerjee welcomed the alliance. "I welcome the alliance of the SP and the BSP for the forthcoming Lok Sabha elections," Banerjee tweeted.

Mayawati mocked Prime Minister Narendra Modi and BJP president Amit Shah. "This press conference will rob the guru-chela of their sleep," she said. "I have full confidence that just as our alliance defeated the BJP in the Lok Sabha bypolls, we will crush the saffron party in the general elections," she said, referring to the BJP's defeat in Phulpur, Gorakhpur and Kairana parliamentary bypolls.

In 2014, the BJP had won 71 seats in Uttar Pradesh while its ally Apna Dal bagged two. The SP won five seats and the Congress two, while the BSP drew a blank.

Explaining why the Congress was not included in the alliance, Mayawati said during that party's rule over the years, poverty, unemployment and corruption grew and there were scams in defence deals. "Just as the Bofors scam uprooted the Congress, the BJP will witness the same fate because of its involvement in the Rafale scam," she said, referring to the graft allegations against the ruling party in a deal for French military aircraft. She also said in tie-ups with the Congress in the past, her party did not benefit.

To a question on seat-sharing with the Rashtriya Lok Dal in western UP, Akhilesh Yadav said the media would be informed about it in due course.

Asked whether it was a "natural alliance", Mayawati said, "This will last long, beyond Lok Sabha polls and in the UP Assembly elections." Asked if he would support Mayawati as prime minister if the situation arises, Yadav avoided a direct reply. "You know whom I will support," he said. "I have said in the past that UP has always given the PM (to the country), and I will be happy if it gives the PM again."

The two leaders did not make it clear whether they will themselves contest the polls, which are to be held by May.

Congress maintains silence on SP-BSP tie-up; likely to go it alone in UP in LS polls