An action plan for the construction of a grand Ram Temple by 2018 will be chalked out very soon, the VHP said on Thursday. 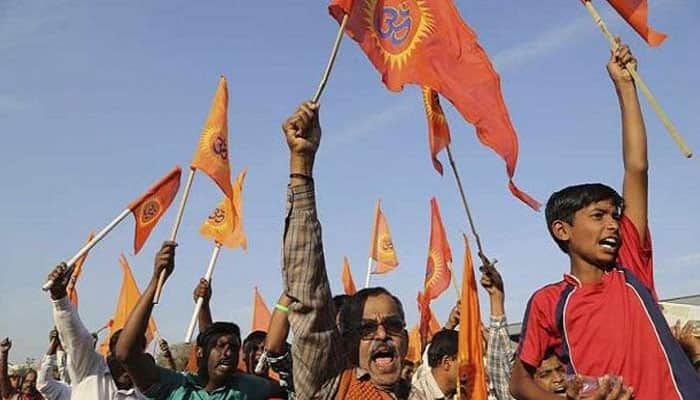 Bhubaneswar: The Vishwa Hindu Parishad (VHP), which had played a pivotal role in the Ramjanmboomi movement in the 1990s, on Thursday said that an action plan for the construction of a grand Ram Temple by 2018 will be chalked out very soon.

VHP spokesperson Surendra Jain said that every possible measure will be taken to ensure the construction of a grand Ram Temple at Ayodhya in Uttar Pradesh by 2018.

Addressing a press conference in Bhubaneswar, Jain said that the issue will be discussed with all top leaders of the outfit this month.

A three-day meeting of VHP's Central Managing Committee will be held for the first time in Odisha`s capital starting November 27, he informed.

"In this meeting, the construction of Ram Temple issue will be widely discussed and an action plan for its implementation would be chalked out. Now, there won't be any delay. We will take every step to construct the temple by 2018," Jain said.

The VHP leader said representatives from all states would participate in the meet which will begin on November 27. Besides, there will be representation from 50 foreign countries.

Besides the Ram Temple, other issues including religious conversion, cow protection and jihadi terrorism would also be discussed during the three-day meeting.

The VHP leader also accused the Christian missionaries of conspiring against Hindus and demanded that the state government make public the report of the Naidu Commission, which probed the murder of Hindu monk Laxmananand Saraswati.

"So that people could know who were the culprits in the case," he added.

Jain also accused the incumbent Odisha government of failing to protect Hindus from conversion despite there being a law against forced religious conversion.

Interestingly, the Mahant Satyendra Das of the makeshift Ram Mandir at the disputed site in Ayodhya, recently said that there was no enmity here between the two communities over the issue.

He said the apex court`s verdict was likely to be in favour of constructing the Ram Mandir at the disputed site -- where once stood the 16th century Babri Masjid that was demolished by Hindu fundamentalists in 1992 -- as evidence "clearly showed" the existence of a temple at the spot in the past.

Satyendra Das said the court`s decision was expected soon, thus facilitating the construction of the "long-cherished" grand mandir at the birthplace of Lord Ram in a year`s time.

On the other hand, former BJP MP Ram Vilas Vedanti, who has been associated with the Ram Temple movement, had rejected the Art of Living founder Sri Sri Ravi Shankar's initiative to resolve the Ayodhya issue.

Sri Sri Ravi Shankar does not qualify to mediate on the matter as he has never been associated with the movement, he had said.

The Art of Living Foundation had said last week that Sri Sri Ravi Shankar has been in touch with several imams and swamis, including Acharya Ram Das of Nirmohi Akhara, to help find an out-of-court settlement to the Ram Temple dispute.