The police recovered nine bodies from an open well at Gorrekunta village near Warangal town on May 21 and 22. They later arrested one Sanjay Kumar Yadav (24), who confessed to committing the gruesome crime to hide the murder of a woman with whom he had a live-in relationship. 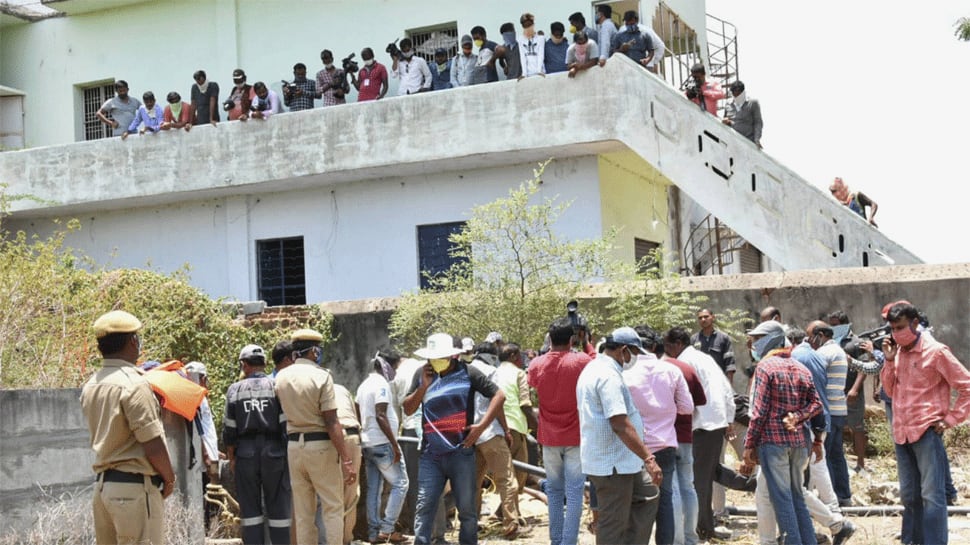 Hyderabad: To hide the murder of a woman, a man from Bihar committed nine more murders by throwing the victims into a well in Telangana's Warangal district last week, the police after it claimed to crack the case.

The police recovered nine bodies from an open well at Gorrekunta village near Warangal town on May 21 and 22. They later arrested one Sanjay Kumar Yadav (24), who confessed to committing the gruesome crime to hide the murder of a woman with whom he had a live-in relationship.

Revealing the details of the macabre murders, Warangal Police Commissioner V Ravindersaid that the accused killed nine persons, including six members of one family, by spiking their food with sleeping pills and later dumping them one by one into a nearby well.

Bodies of Mohammed Maqsood Alam and four members of the family were recovered from the well at Gorrekunta village near Warangal town on May 21. The next day bodies of two more family members of Maqsood and two men from Bihar and one from Tripura were also found in the same well.

The dead were identified as Maqsood (55), a native of West Bengal, who worked at a gunny bag manufacturing unit in Warangal for last 20 years, his wife Nisha (48), daughter Bushra Khatoon (22), sons Shabaaz Alam (20), Sohail Alam (18) and Bushra's three-year-old son. The bodies of Sriram Kumar Shah (26), Shyam Kumar Shah (21), both natives of Bihar and Mohammed Shakeel (40) of Tripura were also recovered from the well. They were all workers in the same gunny bag manufacturing unit.

The police found out that Sanjay was in a relationship with Nisha's niece Rafika (37), who had come from West Bengal after separating from her husband and was employed at the same factory. Yadav had taken a room on rent and was reportedly living with her. Police investigations revealed that Rafiqa had recently admonished him for trying to sexually exploit her daughter.

The accused hatched a plan to kill Rafiqa and informed Maqsood's family that he is taking her to West Bengal to talk to her elders for marriage. They boarded the Garib Rath train to Visakhapatnam on March 6, but during the journey, he bought buttermilk and after mixing sleeping pills, served it to Rafiqa. After she fell asleep, he strangulated her and threw the body from the train near Nidadavole in West Godavari district of Andhra Pradesh.

The accused got down from the train at Rajahmundry and returned to Warangal. When Nisha and her husband enquired about Rafiqa, he said she had reached her village and would come back later. When Maqsood's family threatened to approach the police, he hatched a plan to eliminate all of them. According to the police, the accused visited the factory and examined the surrounding areas. He decided to commit the crime on May 20.

As May 20 was Shabaaz's birthday, he came to their house in the evening and mixed as many as 60 sleeping pills in the food prepared at home. Later, he went to Sriram and Shyam's room, both hailing from Bihar, and mixed sedatives in their food since, they had seen him at Maqsood's house. Shakeel, a native of Tripura who had come to Maqsood's house at the latter's invitation, too became Sanjay's victim.

After everyone started turning unconscious, Sanjay stuffed the bodies one by one into gunny bags and dragged them to a well-located nearby and threw them into the water. All the nine persons, who were inebriated, drowned.

The police commissioner said the CCTV footage of the accused leaving his house on the evening of May 20 and returning the next morning provided the vital clue to the investigating team. "We have no evidence that there is any other person involved in the crime," the police chief said, dismissing reports that four people were picked up in connection with the case.