Was subjected to extreme physical and mental torture by Mumbai ATS: Sadhvi Pragya

'They kept me in illegal detention and tortured me for 13 days.' 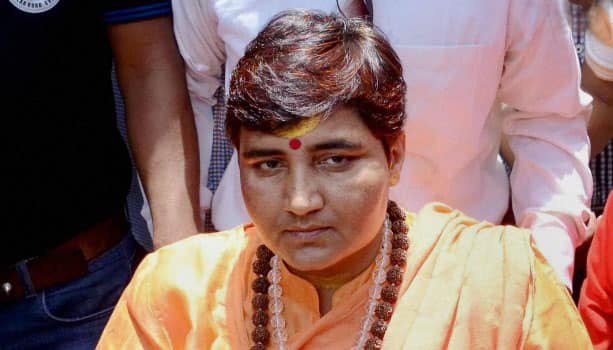 Bhopal: In her first press conference after her release from jail on bail in the 2008 Malegaon blast case, Sadhvi Pragya Singh Thakur alleged that she was subjected to extreme torture by the Mumbai ATS to make her agree to her role in 'saffron terror'.

“I was in jail for the last nine years and I got no chance to express my views. My arrest in 2008 was a part of a larger conspiracy hatched by the Congress in 2008... I have fought back from the black sea of conspiracy,” Pragya said.

She also slammed P CChidambaram for claiming the existence of  'saffron terror' in the country.

“Nine years of injustice... it is clear that it was a conspiracy by the Congress and it is certain the current government will not do any conspiracy (against her) and will try to ensure justice,” she said.

When reporters suggested that the Modi government may have played a role in securing her release, her lawyer intervened and said, “It was the Supreme Court that dropped MOCOCA charges against her (Sadhvi Pragya) on April 12, 2015. There is no need to bring the government into this.”

Making serious allegations against then members of the Mumbai ATS, Sadhvi Pragya claimed that she was illegally arrested by the ATS from Surat on October 10, 2008 and taken to Mumbai.

“They kept me in illegal detention and tortured me for 13 days,” she alleged.

“Khanvilkar, Parambir Singh, (late) Hemant Karkare - all men - tortured me. Never before or after Independence, a woman has been tortured like I have was,” Sadhvi Pragya said.

“I was physically fit before my arrest and now I am disabled – because of the torture at the hands of Mumbai ATS. Even my lungs were damaged and i was put on ventliator for five days,” she said.

Sadhvi Pragya added that she was 'broken' physically by the ATS but they could not break her mentally, as she is a sanyasi.

“Only because of my mental strength I am here before you otherwise the Congress had planned to finish me off,” she said.

Pragya walked out the jail after the Bombay High Court, yesterday, granted bail to her, holding that prima facie no case was made out against her.

The court, however, rejected the bail plea of co-accused Prasad Purohit, a former Army lieutenant colonel, saying the charges against him are of "serious and grave" nature.

Six persons were killed and nearly 100 others injured when a bomb strapped to a motorcycle had exploded in Malegaon town of Nashik district on September 29, 2008.

Sadhvi Pragya, 44 , was arrested in October that year and Purohit, 44 , the next month and both were charged with plotting the blasts as part of what the prosecution said a plan by Hindu right wing group Abhinav Bharat. They are in jail since their arrests. Nine others were also arrested and are behind bars.

The court also asked Pragya to furnish a cash surety of Rs five lakh and surrender her passport to the National Investigation Agency (NIA).

It also directed her not to tamper with the evidence and to report to the NIA court as and when required.

Sadhvi Pragya, who is suffering from cancer, is currently undergoing treatment at a Madhya Pradesh hospital, while Purohit is lodged in Taloja jail in Maharashtra.

The NIA, which took over the probe from the ATS, had given a clean chit to Sadhvi Pragya and told the High Court that it had no objection if she was released on bail.