We respect mandate given by people of Jharkhand, says Amit Shah

Home Minister Amit Shah's reaction comes as the Congress-JMM-RJD combine heads towards a majority in the Jharkhand Assembly elections. 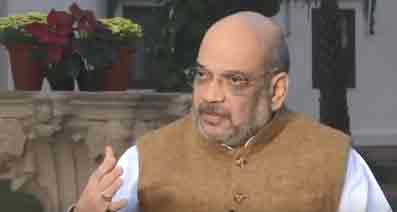 New Delhi: Union Home Minister and BJP leader Amit Shah on Monday (December 23) said that the BJP respects the mandate given by the people of Jharkhand, adding that the party is committed towards the continuous development of the state.

In a tweet, the Home Minister said, "We respect the mandate given by the people of #Jharkhand. We express our gratitude towards them for giving us the opportunity to serve them for 5 years. BJP is committed towards continuous development in the state".

Amit Shah's reaction comes as the Congress-JMM-RJD combine heads towards a majority in the Jharkhand Assembly elections.

CM Raghubar Das also conceded defeat and said: “it was his defeat, not of the BJP.” Das is trailing in Jamshedpur (East) by a margin of 10, 017 votes against independent candidate Saryu Roy.

As per the latest trends, the BJP has won or is ahead in 25 seats while the rival JMM-Congress alliance is set to win 46 seats.

Jharkhand went to polls for 81 Assembly seats in five phases from November 30 to December 20 and witnessed 65.17 percent voter turnout. The counting of votes began at 8 am today in all the 24 district headquarters amid tight security.