Dhankhar said the Mamata's outburst on him is an alibi strategy to cover up monumental failures in tackling the COVID-19 pandemic in the state.

Kolkata: The political sparring between West Bengal Chief Minister Mamata Banerjee and Governor took an acerbic turn on Friday (April 24) with Jagdeep Dhankhar writing an 11-page letter to Mamata Banerjee, where he accused her explicitly appeasing the minority community in the state for her own good. Dhankhar said the Chief Minister's outburst is an alibi strategy to cover up monumental failures in tackling the COVID-19 pandemic in the state.

Referring to Mamata's Thursday letter to him where she accused him of repeatedly interfering in the functioning of her government, Dhankhar said the CM's outburst is an alibi strategy to cover up monumental failures in tackling the COVID-19 pandemic in the state. "This response be taken as initial one and a thorough one will be imparted to you tomorrow with complete documentation so that people of the state, as you say, are made aware and come to know the series of acts of indignities and indiscretions heaped by you, your ministers on the Governor all through," the letter reads.

Dhankhar urged the Chief Minister to shun politics and confrontational approach, saying her conduct is only compounding the miseries of the people of the state. "Your communication is part of the alibi strategy that emanates from a script that seeks to cover up monumental failures in these challenging times by a series of blunders," the governor said in the letter.

"Your appeasement of the minority community was so explicit and awkward on the Nizamuddin Markaz incident. This is most unfortunate and cannot be appreciated," he said, referring to an event where the Trinamool Congress supremo was asked to comment on the Tablighi Jamaat religious congregation in the national capital.

Mamata had on Thursday written to the Governor, "The tone tenor and language of your letters and messages to me are unparliamentary and an insult to my office. You appear to have forgotten that I am an elected Chief Minister of a proud Indian state. You also seem to have forgotten that you are a nominated Governor." Reacting to Mamata's statement, Dhankhar wrote, "Your constant refrain of Governor being 'nominated' is lamentable and can be ascribed only to elementary ignorance of the Constitution."

"In quoting my message, you have ignored a subsequent message that I sent you immediately after our telephone conversation. That message is thus: 'I do not appreciate the outbursts. Time for composed interaction. Governor is not expected to be in sleep mode when the State is facing stressful challenges'," his letter reads. 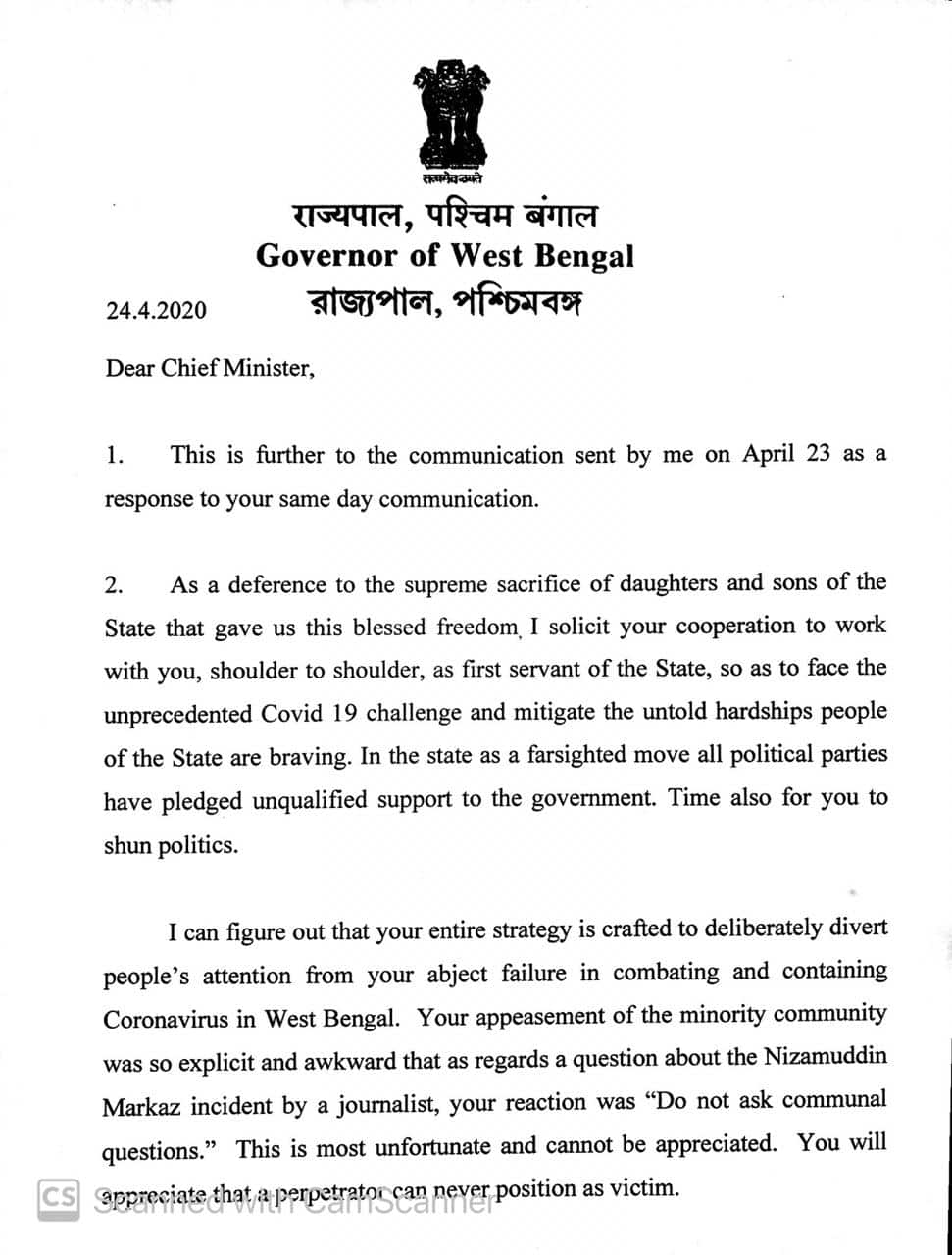 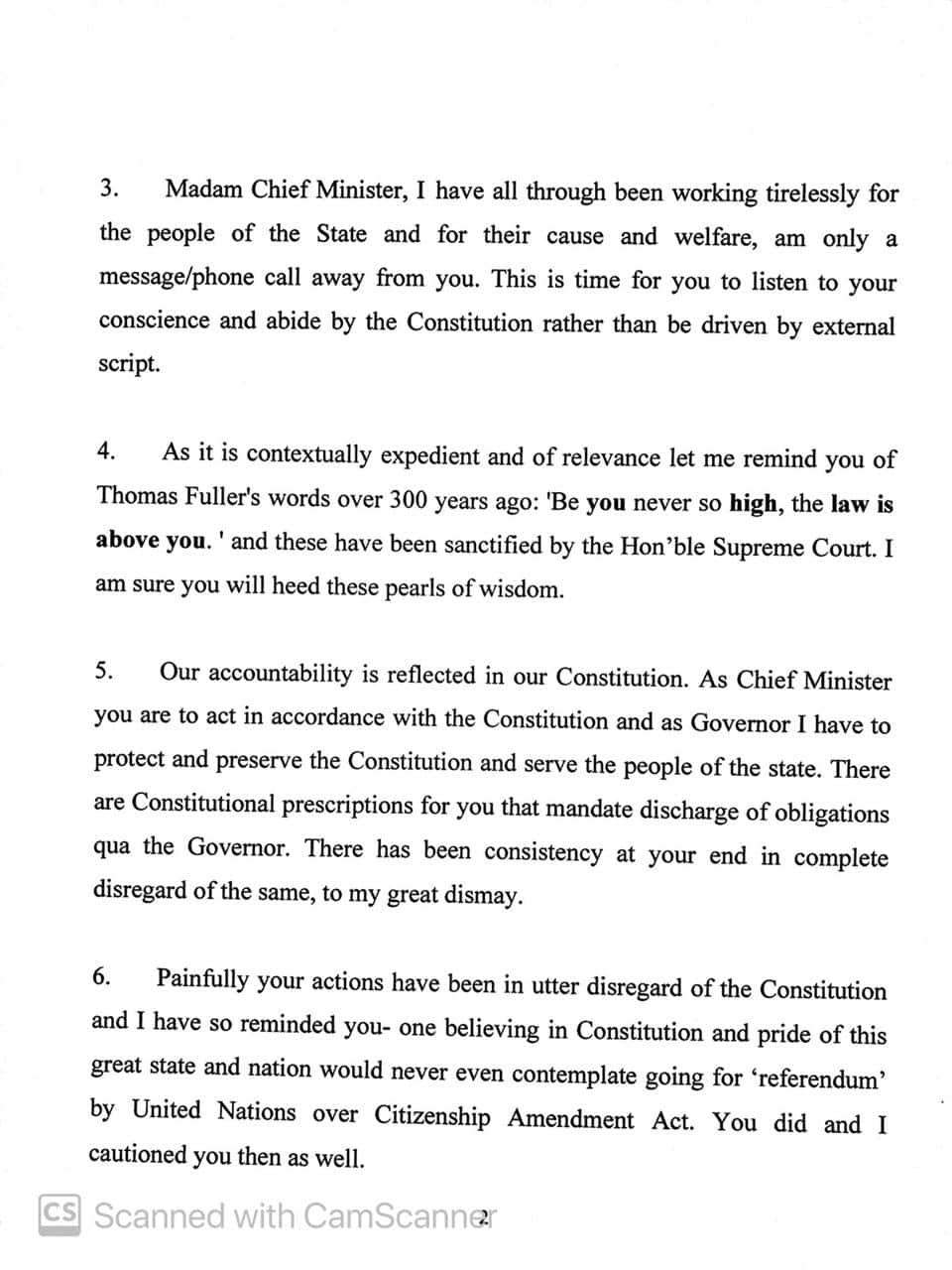 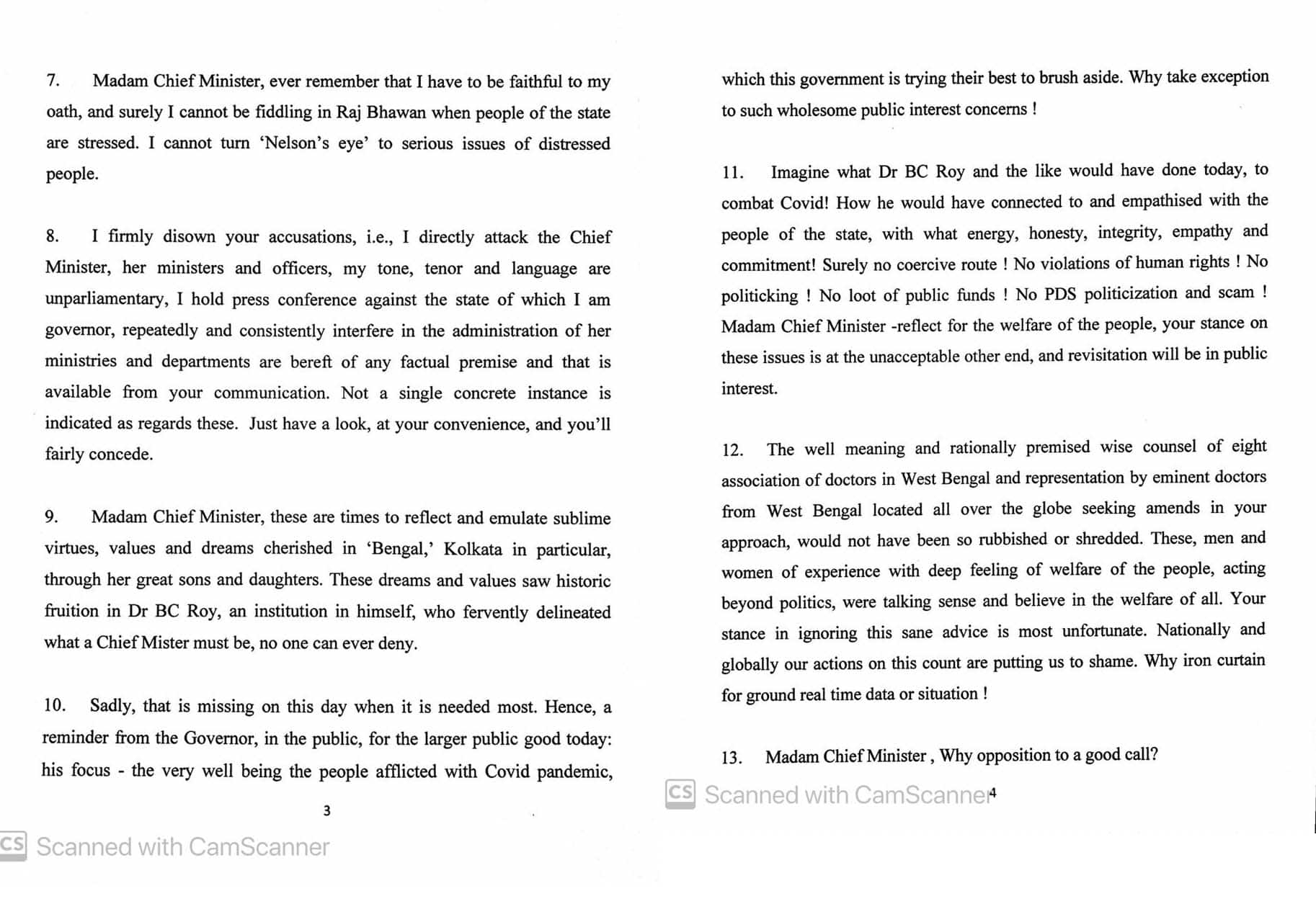 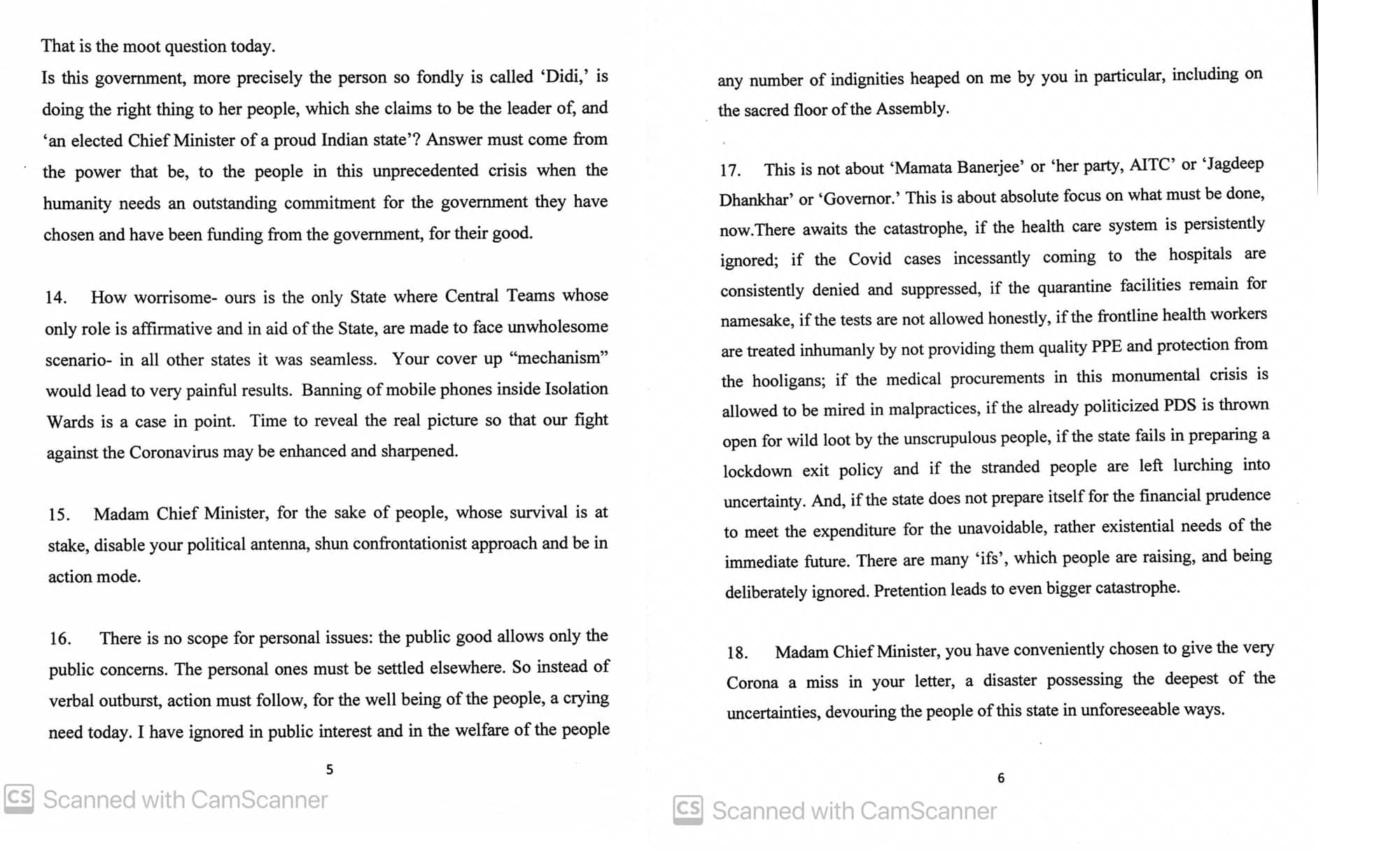 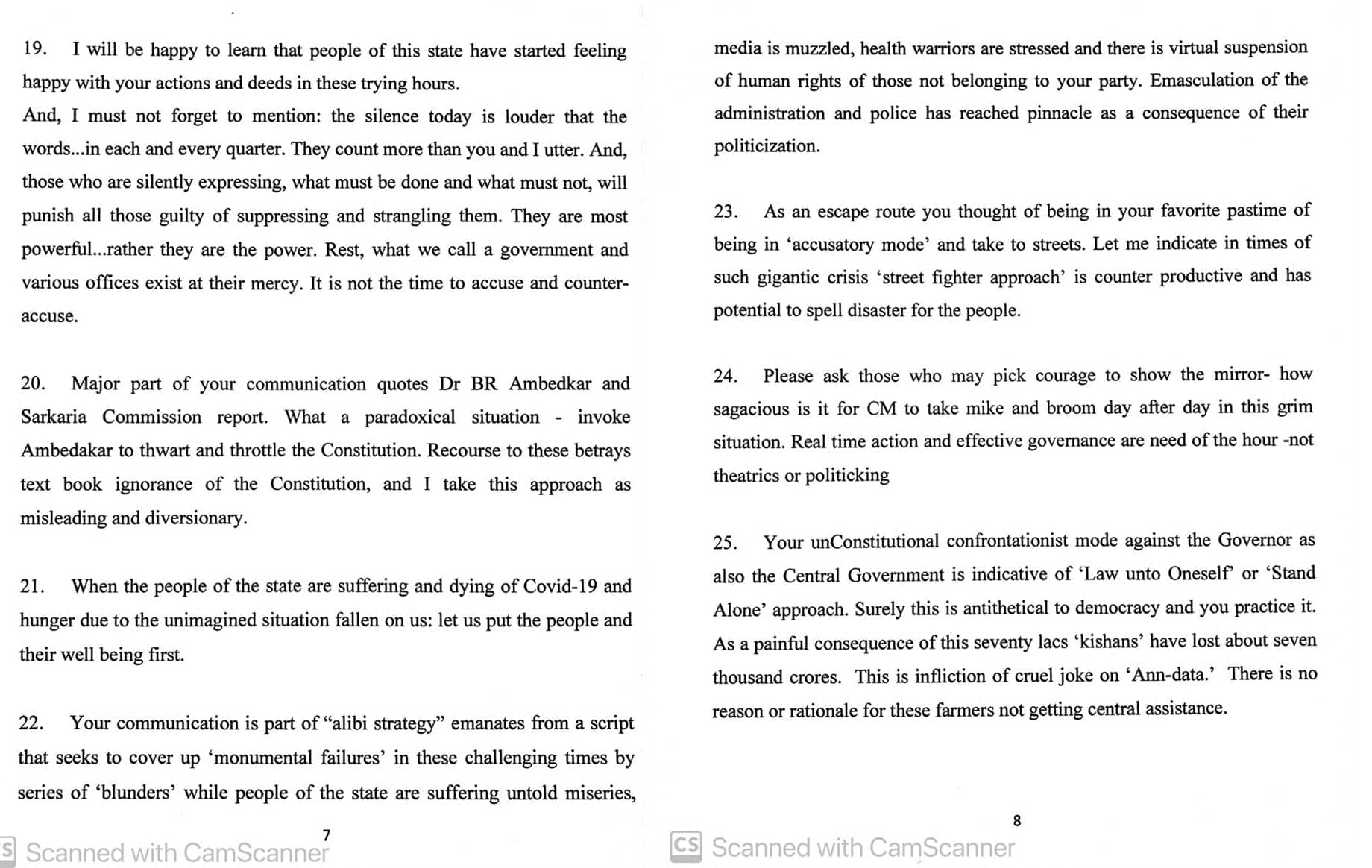 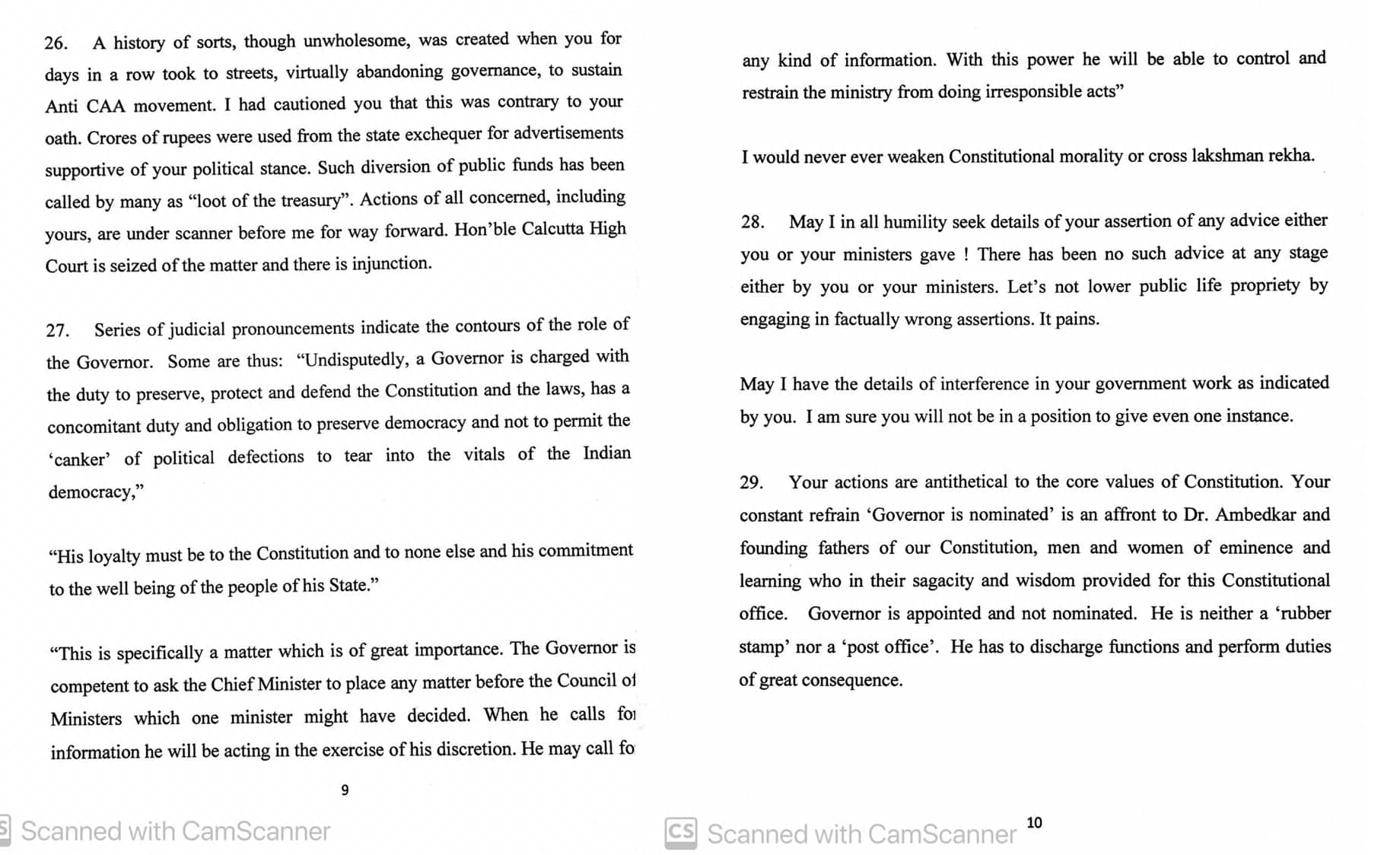 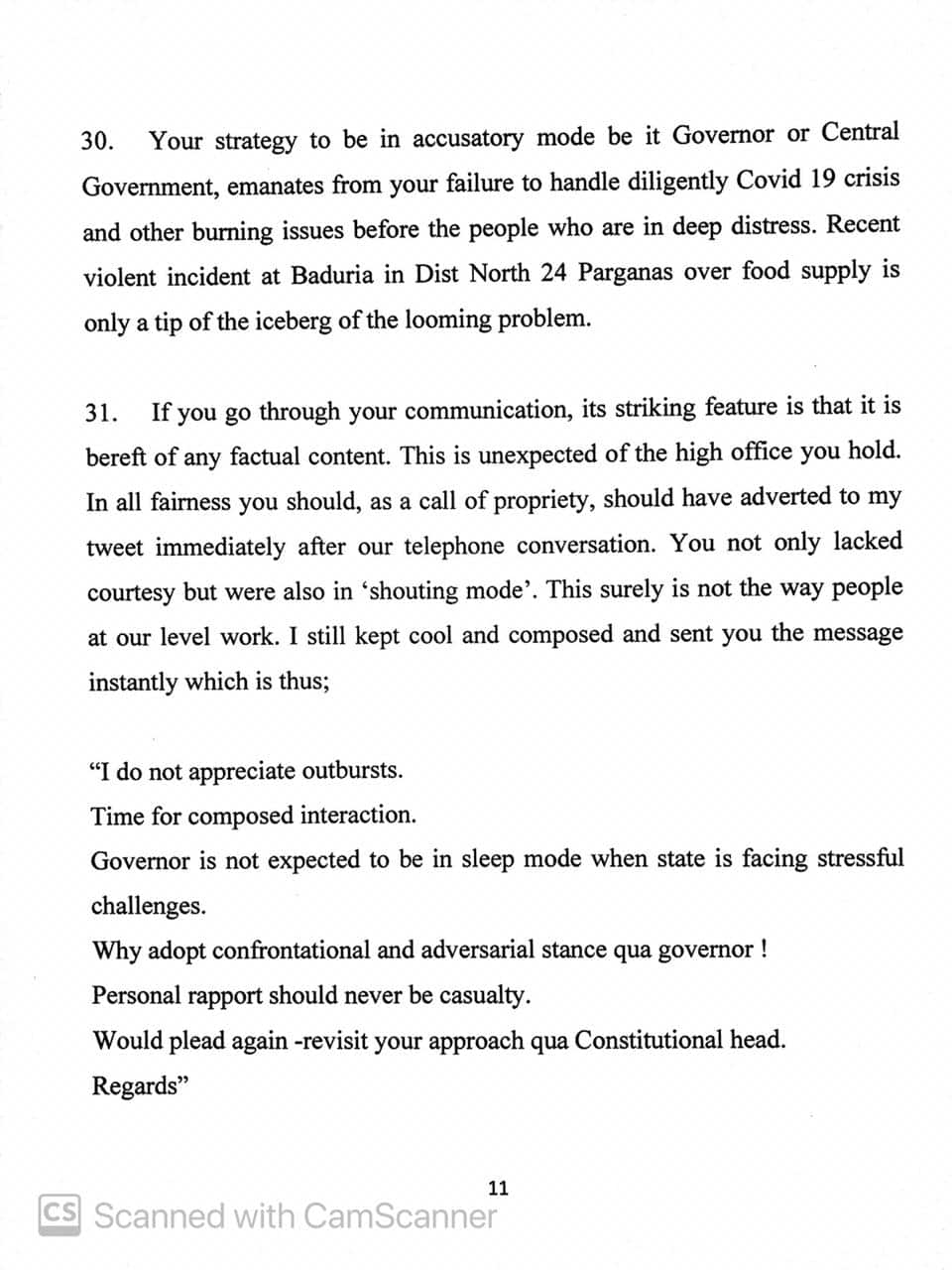 On April 23 late night, Dhankhar had announced on Twitter that he would send a final response to CM Mamata's charges by 11 am on Friday.