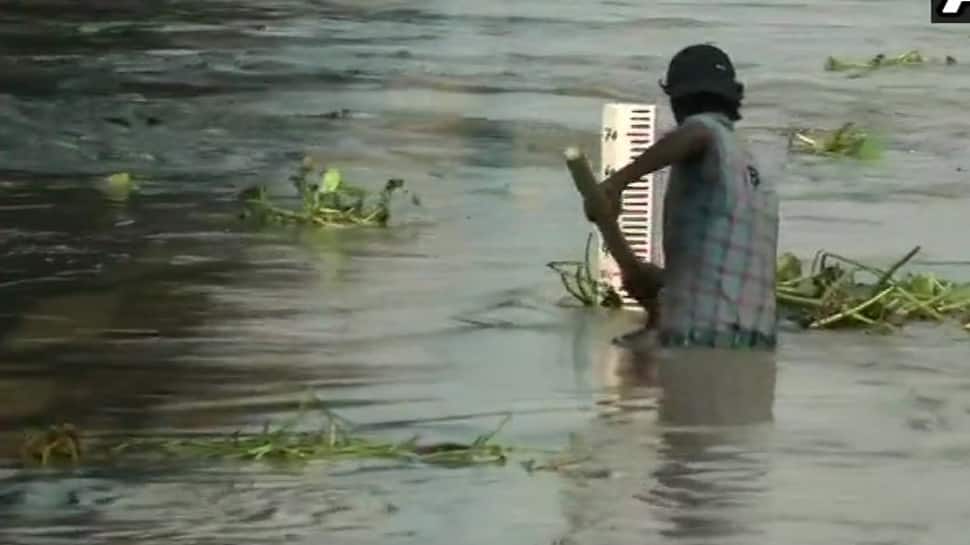 New Delhi: Yamuna river on Monday evening crossed the danger level mark as water level in the river reached 205.5 metres in Delhi, as against the danger level mark of 205.33 metres. A high alert has been sounded in the national capital asking all the relief and rescue agencies to stay vigilant.

According to Zee News sources, Delhi would be in a real fix if the water level flowed above 207 metres.

Thousands of people living in low-lying areas along the Yamuna were evacuated by state and government agencies as the river breached the danger mark even as a portion of the Nigambodh Ghat in east Delhi was flooded with Yamuna overflowing, according to reports.

Earlier on Monday Yamuna river had crossed the 'warning mark' even as Delhi Chief Minister Arvind Kejriwal had convened an emergency meeting to take stock of the situation and review relief and rescue preparedness in case need arises.

All vehicular movement on old iron bridge was on Monday afternoon stopped from both sides as Yamuna river reached very close to the danger level mark, Delhi Traffic Police said.

After the vehicles were stopped from plying on the iron bridge, Delhi Traffic Police issued a traffic advisory. The advisory informed the general public that due to the raised water level of the Yamuna River, the Old Iron Bridge was closed for general traffic from both sides as a precautionary measure for public safety since today morning i.e. 19/08/2019, till further orders.

The alternate routes for reaching their destinations to North, Central or South, South East Delhi and vice versa to East, North East of Ghaziabad border are available through Raja Ram Kohli Marg via Salimgarh bypass (Ring Road), Ring Road (Shantivan) or G.T. Road via Pushta Road, are as under:

i) Motorists intending to go to North or Central Delhi via Old Iron Bridge from Pusta Road may either take GT Road via Shastri Park or they may take Raja Ram Kohli Marg.

The situation in Delhi is likely to remain grim over the next 48 hours as a flood alert has been issued in the region seeing the rising water level of Yamuna river. The Delhi government, Centre and the Governor are working jointly to ensure the safety of people. Around 23, 816 people in total living in the low-lying areas would be evacuated to safety. They would be shifted to more than 2,000 relief camps set up across the national capital. Over 1,100 relief camps have been already set up with all the necessary facilities. Around 50 rescue boats have been stationed at over 30 locations to help people, as and when required.