Through its campaign, Zee News is seeking the support of the people via a missed call. If you support the Citizenship Amendment Act, all you need to do is give a missed call on 7836800500 and 7834998998, which are toll-free numbers. 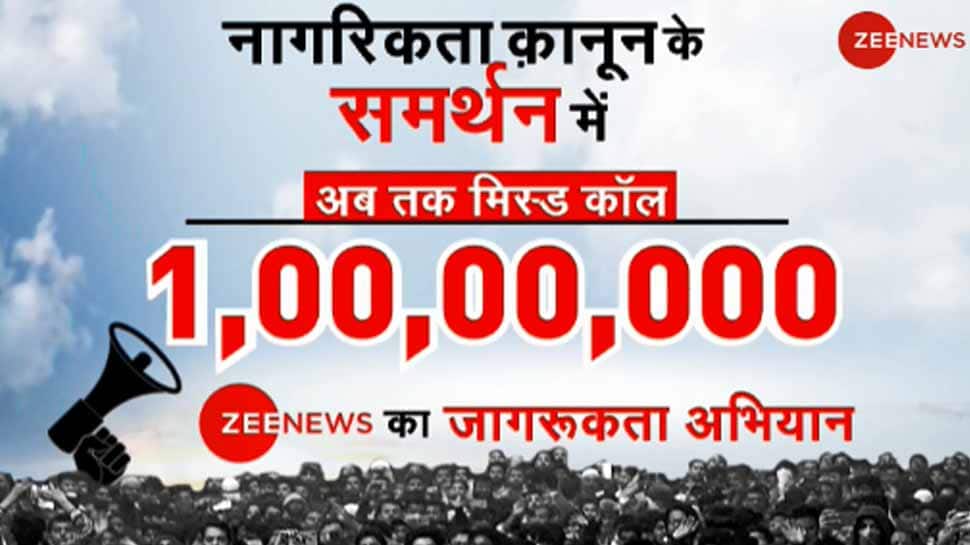 Through its campaign, Zee News is seeking the support of the people via a missed call. If you support the Citizenship Amendment Act, all you need to do is give a missed call on 7836800500 and 7834998998, which are toll-free numbers. The missed call on these numbers means that you are in support of the new Act. You can also show your support for the Act on micro-blogging site, Twitter, with the hashtag, #ZEENewsCreatesWorldRecord.

The missed calls that have been received by Zee News were not only from India but from people all over the world. The countries that supported Zee News in its campaign are people from--Pakistan, Afghanistan, Japan, Cambodia, China, UAE, France, Bangladesh, Israel, Indonesia and Brazil.

The campaign was started in the wake of violent protests across the country against the Act. The public awareness campaign was launched on Saturday (December 21) to dispel the myths and rumours surrounding the new law. Since then, the Zee News initiative has received a massive response.

Along with violent anti-CAA protests, assemblies and marches are also being held in favour of the Citizenship Amendment Act in several parts of the country with the demonstrators hailing Prime Minister Narendra Modi for bringing a strong legislation, which aims at granting a dignified life to Hindu and other religious persecuted minorities from three neighbouring nations.

The ruling Bharatiya Janata Party (BJP) has announced a communication campaign to counter misinformation spread by Congress and other opposition parties over the new law leading to violent protests. “The BJP will reach out to over three crore families. We will organise press conferences at over 250 places in the next 10 days. In addition, over 1,000 rallies will be held to clear the air over the Citizenship (Amendment) Act (CAA) and to bust the myth created by the opposition,” BJP general secretary Bhupender Yadav had announced.