Zomato food delivery executives in Howrah are on an indefinite strike protesting against delivering beef and pork. 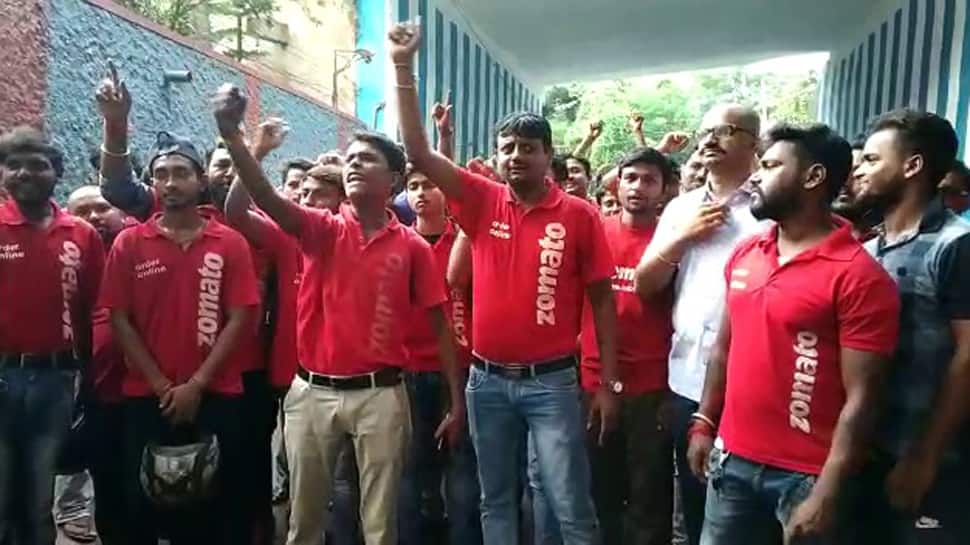 Food delivery executives of Zomato are on strike in Howrah in West Bengal, alleging that they were compelled to deliver beef and pork. Speaking to news agency ANI, the employees said that Zomato was not listening to their demands.

Zomato food delivery executives in Howrah are on an indefinite strike protesting against delivering beef and pork.

“The company is not listening to our demands and forcing us to deliver beef and pork against our will. We have been on strike for a week now,” said a delivery executive.

The West Bengal government has taken cognisance of the matter, with minister Rajib Banerjee assuring action.

“The organisation should not force any person to go against their religion. It is wrong. Now that I have received information in this regard, I will look into it the matter,” the minister told ANI.

According to reports, the delivery executives are also seeking a revision of their salaries.

The employees said that when they refuse to deliver beef or pork, they are threatened saying no order could be cancelled under any circumstances. They have been on strike for the past seven days.

One of the executives, Bajrang Nath Verma said that he had to carry the same bag, in which he delivered beef, to his residence and it hurt his religious beliefs.

Another executive, Mohsin Akhtar said that he would not deliver pork under any condition. “Recently some Muslim restaurants have been added to the online food delivery app. But we have some Hindu delivery boys who are denying to deliver beef. And it's been heard that in few days we have to deliver Pork, which we refuse to do. We are also facing pay out issues and have least medical facilities,” he said.

Akhtar added, “All these are hampering the friendly bond between us as we have to deliver food which is not permitted in our religion. Our religious sentiment is being hurt too, The company knows everything, but in spite of helping us they are using false allegations against us, they have registered a complaint against one of the delivery boy.”

They have also claimed that Zomato has not even issued them identity cards. There are also no medical of provident fund benefits.

Victor Banerjee, another Zomato food delivery staff, said, “I am Hindu but there other fellow delivery boys who are Muslim and Brahmins too. We have no issues in working together. Since Zomato has presently tied-up with some new restaurants, who prepare pork and beef, they ask us to work under any circumstances and we cannot cancel any order.”

“If any of us deny delivering any particular food then this would fall under denial dispute which would be followed up by manager. The Muslims are equally feeling hurt with this decision as we Hindus are. The company is hurting our religious sentiment. We want this to be stopped immediately. We have stopped our service, and protest till this draconian law gets revoked.”