In today's doodle, the first baby elephants is jumping with joy and excitement while the other one was making a 2019 popcorn banner by pumping his trunk as they step into the New Year. 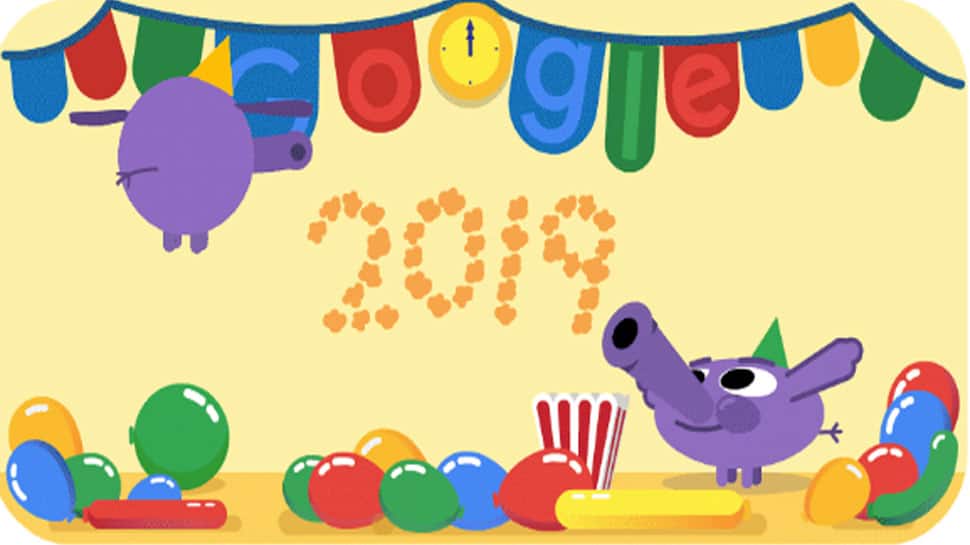 New Delhi: Search engine giant Google has again come up with an animated doodle to celebrate the New Year 2019.

In today's doodle, the first baby elephants is jumping with joy and excitement while the other one was making a 2019 popcorn banner by pumping his trunk as they step into the New Year.

“Well, it’s time to call out the elephant(s) in the room: it’s out with the old and in with the new! Here’s to a bright year ahead,” Google wrote in its doodle page.

Yesterday, Google's made an animated doodle showing two cute elephants blowing up balloons and eating popcorn. In the doodle, Google showed two elephants playfully arranging for party decor while a wall clock was showing just minutes away from striking midnight.

“A mammoth pile of balloons? Check. A ton of  party hats? Check. A herd of friends and family ready to countdown? Check. Let the New Year’s Eve festivities commence! At the stroke of midnight, it’s out with the old and in with the new. We’ll sing that song “Should old acquaintance be forgot,” but there’s no need to worry about our purple friends. Elephants never forget,” Google wrote wishing every one a “Happy New Year’s Eve!”.

New Year celebrations are held across the world with people gathering to celebrate it by releasing balloons at the turn of the New Year while others congregate to watch spectacular fireworks show.