Farooq Abdullah's sister, daughter detained during protest against abrogation of Article 370 in Srinagar

A group of women today held a demonstration at Srinagar's Lal Chowk against the withdrawal of Article 370 in Jammu and Kashmir. 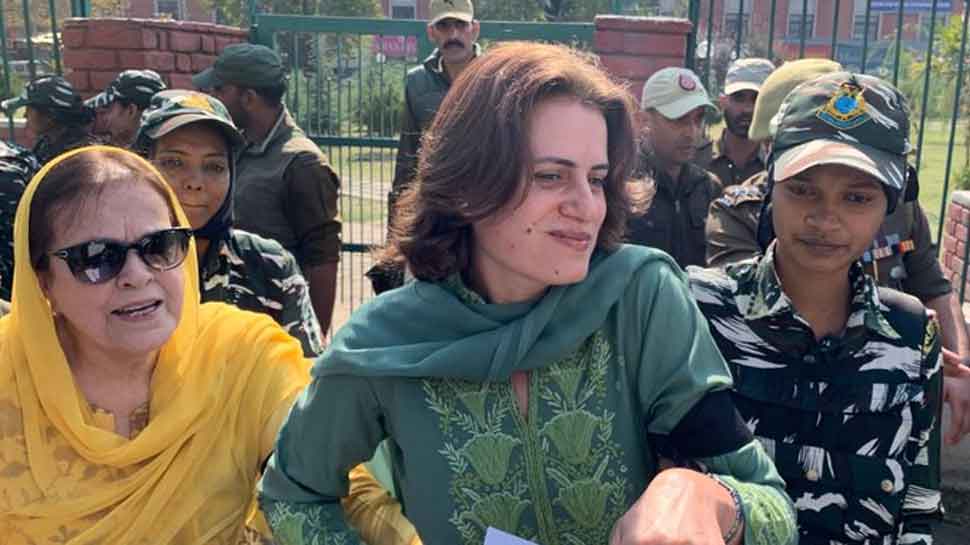 New Delhi: The Jammu and Kashmir Police on Monday detained National Conference leader Farooq Abdullah's sister Suraiya and daughter Safiya during a protest against Centre's decision to abrogate Article 370 and bifurcation of the state into two union territories.

Farooq Abdullah's sister and daughter and Hawa Bashir, an academician and wife of former Jammu and Kashmir Chief Justice Bashir Ahmed Khan today held a demonstration against the repeal of Article 370 that granted special status to Jammu and Kashmir after which they were detained by the police.

The women, wearing black armbands and carrying placards, which read, 'Kashmiri brides not for sale' and 'Why downgrade Jammu and Kashmir state', assembled at Srinagar's Lal Chowk today for a protest against the government. Farooq's sister and daughter were leading the group of protesters and attempted to stage a sit-in when they were detained by the CRPF women personnel. The development took place a day after the Jammu and Kashmir administration restored all postpaid mobile services in the state on Monday, almost two months after all mobile and internet services were blocked by the government in Kashmir Valley.

A day before August 5, when Union Home Minister Amit Shah announced the decision on withdrawal of Article 370 from Jammu and Kashmir, the government imposed massive security measures in the state, including blocking all phone and internet lines, evacuating tourists, and detaining several prominent leaders. Hundreds of political leaders in Jammu and Kashmir, including PDP supremo Mebooba Mufti, National Conference leader Omar Abdullah, NC chief Farooq Abdullah have since then been detained or put under house arrest as the government announced scrapping of special status granted to the state under the Article 370 of Constitution.

Farooq, who has been detained at his house, has been charged under the Public Safety Act on the grounds that he has 'tremendous potential to create public disorder in Srinagar and other parts of the Valley'. The administration has cited several instances since 2016 when he made statements in conflict with the law.

Earlier his daughter Safiya had put up a black flag, seemingly as a mark of protest against the revocation of the special status of Jammu and Kashmir outside her house.