In J&K, terrorists use posters to fight against normalcy, warn locals of dire consequences

According to intelligence sources, JeM and LeT have appeared at a number of places outside local mosques in North and South Kashmir districts threatening shopkeepers, transporters and others with dire consequences if they attempt to resume normal activities.

A month after Centre abrogated Articles 370 and 35A in Jammu and Kashmir, posters by terrorist organisations have cropped up in several places, threatening people to prevent the return of normalcy in the Valley. The posters were found in Anantnag, Shopian, few districts of north Kashmir and downtown Srinagar on Wednesday and Thursday.

As the situation gradually limps back to normal in the valley, such posters by terrorist outfits are urging locals to continue the boycott of Centre's decision and attempt to instil fear.

“After using previous political affiliations of people, India is making efforts to divide Muslims at this critical turn. After shunning previous political affiliations, people should not cooperate with India. Anybody cooperating will be called treacherous and murderer of this nation. The nation will fix penalty of such persons,” states one such poster allegedly circulated by Youth Wing Resistance Leadership.

“India has been projecting our activities in a wrong manner before world nations. You are requested to come out of homes on need basis and not make unnecessary use of vehicles, so that Indian media does not get justification for carrying wrong information,” it adds.

Another public notice by 'Oppressed Kashmir People' states, “It is the responsibility of us all to hold hands of each other at this critical juncture; come on roads to expose the so-called democracy of India and to fulfil the mission of martyrs. Government employees are requested, in particular, to support by holding boycott. After every evening prayer. people should hold peaceful protests in every street and locality so that oppressed Kashmiris can get their rights.” 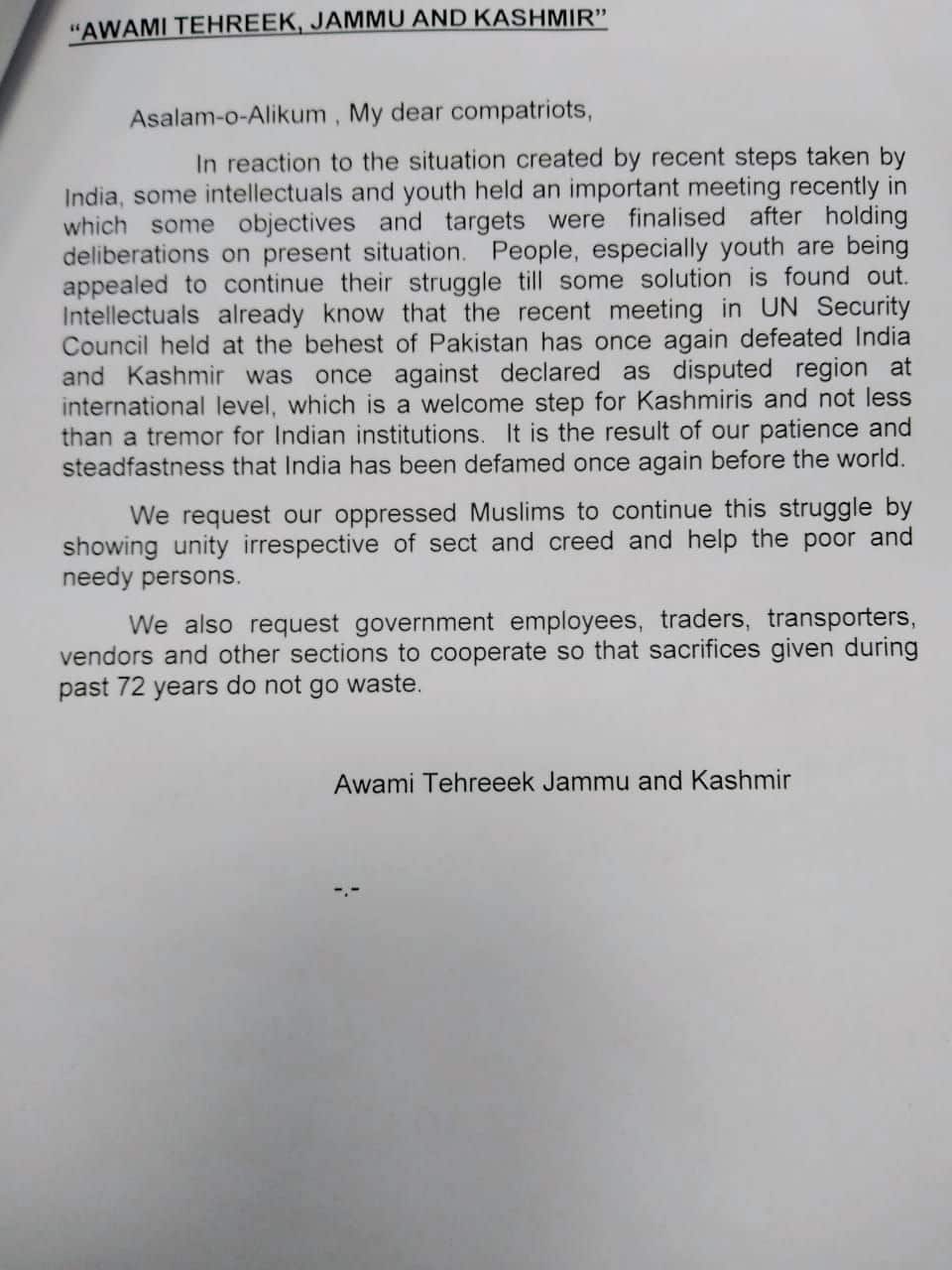 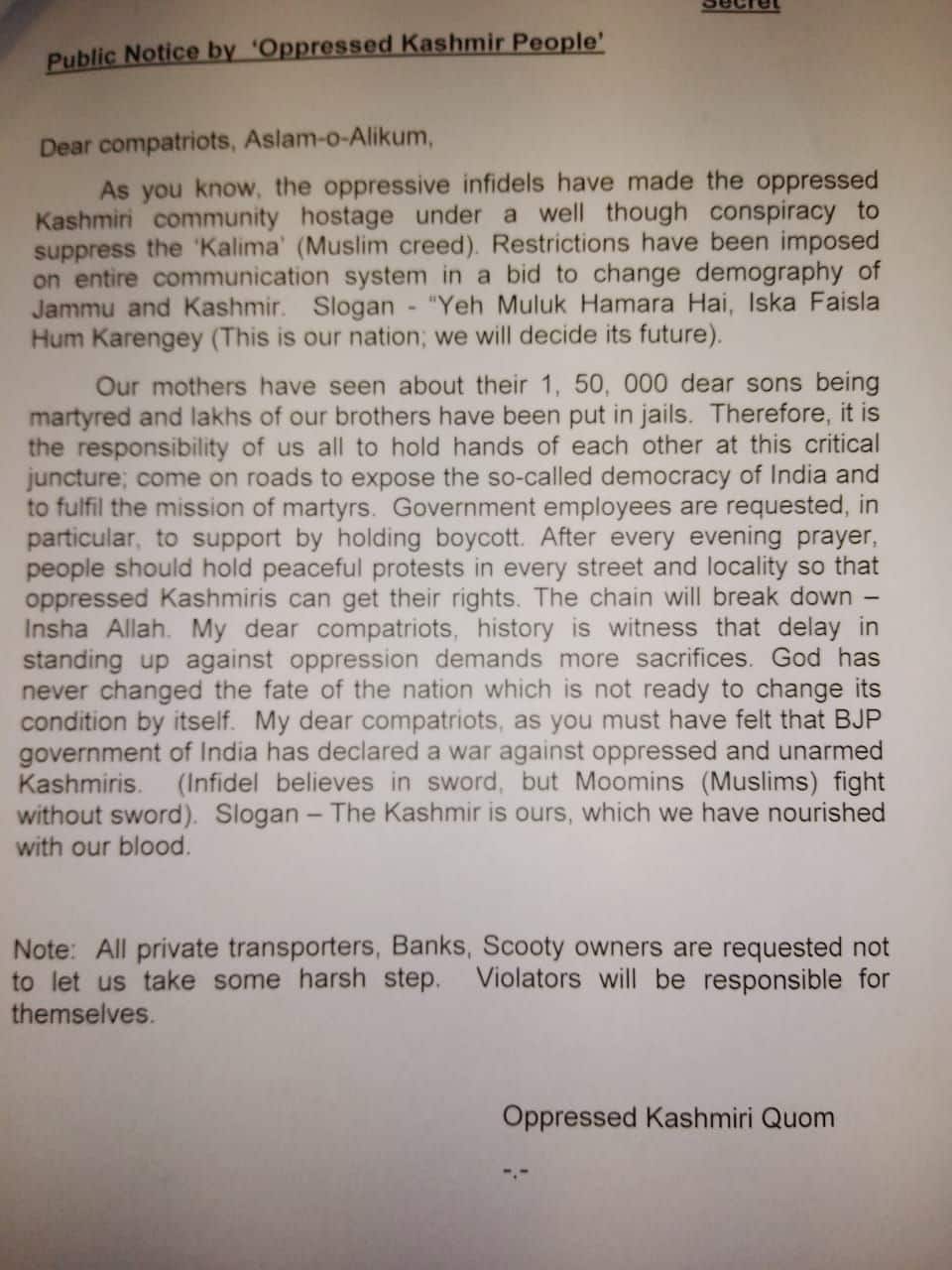 According to intelligence sources, Jaish-e-Muhammed (JeM) and Lashkar-e-Taiba (LeT) have appeared at a number of places outside local mosques in North and South Kashmir districts threatening shopkeepers, transporters and others with dire consequences if they attempt to resume normal activities.

Some masked youths also reportedly appeared in some mosques in Srinagar and Sopore warning people not to resume normal activities.

On 5 August 2019, the Centre abrogated Articles 370 and 35A in Jammu and Kashmir which gave special status to the state and bifurcated it into two Union Territories – Jammu and Kashmir, and Ladakh.

Frustrated by Indian government's decision to abrogate Article 370, which granted special status to the erstwhile state of Jammu and Kashmir, Pakistan has been desperately trying to unleash mayhem in India.

Pakistan's spy agency ISI has upped its efforts to create disturbance in Jammu and Kashmir and the ISI has chalked out a plan to recruit 10,000 terrorists from the restive Waziristan region of its Khyber Pakhtunkhwa province. Sources added that camps have been set up by ISI to provide training to the new recruits before helping them cross over the LoC to launch terror attacks in India.

"This remains a big worry for the militants and that is why they are resorting to civilian killings and handing down threats. Such tactics are self defeating as the common man seems to have decided not to play into their hands", said a senior police officer.