Only 500 pilgrims to be allowed per day for Amarnath Yatra, puja to be telecast live: J&K Administration

Asserting that the upcoming annual Amarnath Yatra would have to be undertaken in a "restricted manner" due to the COVID-19 pandemic, the Jammu and Kashmir Administration on Saturday said only 500 pilgrims would be allowed per day by road from Jammu to the 3,880-meter-high holy cave shrine. 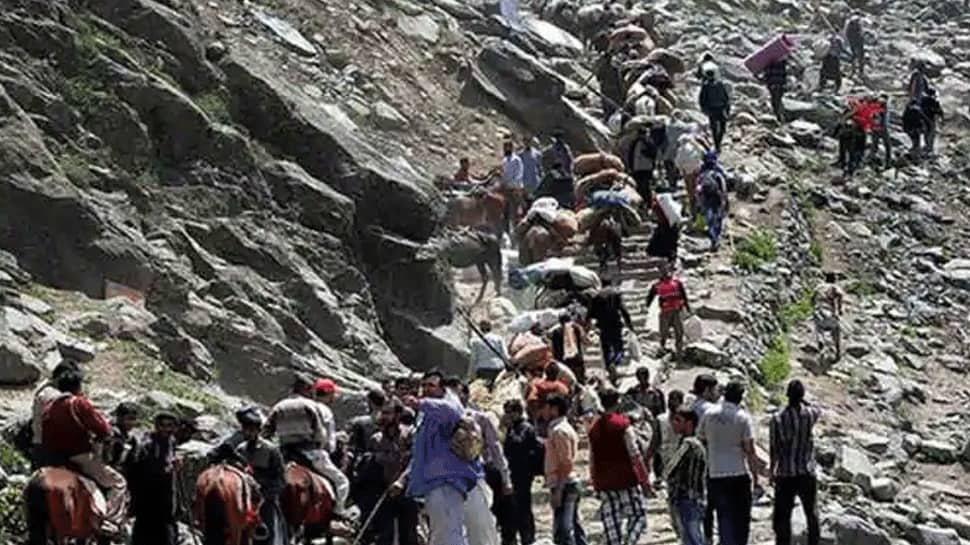 SRINAGAR: Asserting that the upcoming annual Amarnath Yatra would have to be undertaken in a "restricted manner" due to the COVID-19 pandemic, the Jammu and Kashmir Administration on Saturday said only 500 pilgrims would be allowed per day by road from Jammu to the 3,880-meter-high holy cave shrine.

It also said the standard operating procedures (SOPs) for testing of persons entering the Union Territory would also be applicable to the intending Amarnath pilgrims.
"The yatra this year will have to be undertaken in a restricted manner so that the SoPs for COVID-19 are strictly adhered to during the conduct of the yatra, a maximum of 500 yatris only could be allowed per day by road from Jammu," Chief Secretary B V R Subrahmanyam said.

He also chaired a meeting of the sub-committee constituted by the Supreme Court for the yatra here. In the meeting, he reviewed the arrangements, including security for the pilgrimage, an official spokesman said.

The 42-day yatra was scheduled to commence from the twin tracks of Pahalgam in Anantnag and Baltal in Ganderbal on June 23 but was delayed due to the outbreak of the pandemic. According to sources, the Shri Amarnathji Shrine Board (SASB) is planning to undertake the yatra in the last week of July for a short duration of 15 days.

While reviewing the preparations for the Yatra 2020, the Chief Secretary said in view of the COVID-19 pandemic, the State Executive Committee constituted under the Disaster Management Act has issued SoPs which, interalia, prescribe 100 per cent RTPCR test for all persons travelling into J&K.

"All entrants into J&K will have to be sampled, tested and quarantined till they are reported to be negative," he said, adding the camping facilities earlier utilised for yatris, especially at entry points are currently being utilised as quarantine centres.

He emphasised that SoPs for testing of persons entering J-K would apply to yatris as well. During the meeting, the Chief Secretary was briefed by the departments concerned with regard to status of works, including upgradation and improvement along the track from Baltal to the Cave shrine at Kali Mata and emergency exit track from Sangam, installation of railings along critical stretches of the track, construction of additional helipads at Lower Holy Cave and construction of sanitisation tunnels at Neelgrath Helipad, Baltal and Domel.

He also reviewed strengthening of footbridges and routine works viz installation of bailey bridges, the spokesman said. Financial Commissioner, Health, Atal Dulloo also gave a brief with regard to healthcare.

He said adequate stock of drugs, consumable items, sleeping bags, besides PPE kits and masks are being made available to the doctors and paramedical staff being deployed for yatra duty.

Dulloo apprised that two base hospitals are also being established along Baltal route. However, he was concerned about the stress in the medical system because of the yatra.

"Nine out of 10 Kashmir districts are Red and the entire medical system is fully stretched in handling the challenge. No doctors will be available from outside J&K for the Yatra this year," he said.

"COVID and high-altitude sickness symptoms are quite similar and all cases will have to be treated as deemed COVID positive in case of an emergency. Also, special arrangements will have to be made for handling dead bodies," he said.

With regard to the security arrangements, the chief secretary asked the police department to ensure the effective regulation of the yatra at access control gates. He emphasised that all deployments in relation to security, rescue and fire and emergency need to be in place well in time.