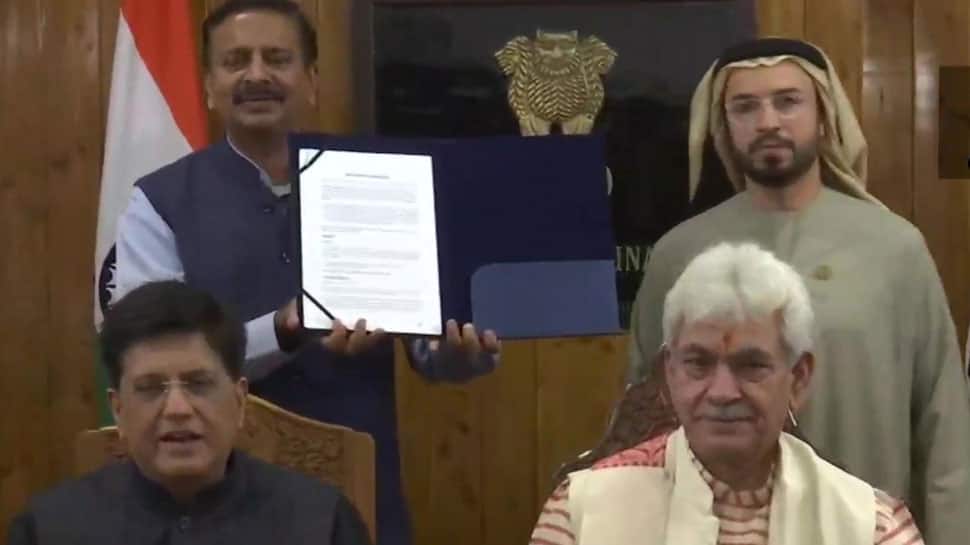 Srinagar: Undeterred by the recent killing of civilians and migrants in Jammu and Kashmir, the Union Territory Administration has signed an MoU with the Dubai government for several development projects.

According to reports, the MoU between the J&K Administration and the Dubai government has been inked for real estate development, industrial parks, IT towers, multipurpose towers, logistics, medical colleges, super-specialty hospitals and more.

Union Industries and Commerce Minister Piyush Goyal was also present at the event in Raj Bhavan.

Speaking to the reporters at the Raj Bhawan in Srinagar, Piyush Goyal said that during his recent visit to Dubai, King Sultan Ahmed expressed his interest to visit India especially Jammu and Kashmir to invest in real estate business.

"I invited him and now the results are clear. He said people from Dubai will now throng J&K and the UT will go a long way in Tourism and Real Estate business," Goyal said.

It may be noted that a street hawker from Bihar and a labourer from Uttar Pradesh were killed in two back-to-back attacks by terrorists in the Srinagar and Pulwama districts of Jammu and Kashmir on Saturday.

Over the past few days, several civilians have been killed by terrorists in Jammu and Kashmir, sparking fear in the Kashmir Valley.

Bihar Chief Minister Nitish Kumar had a telephonic conversation with Jammu and Kashmir Lieutenant Governor Manoj Sinha and expressed serious concern over the two labourers killings and one injured in the terror attack at Wanpoh in Anantnag, J&K.

The Chief Minister condoled the killings of Raja Rishidev and Yogendra Rishidev and the injury of Chunchun Rishidev who are residents of Bihar.

According to the press statement issued by the Chief Minister Office, Kumar announced to give Rs 2 lakh each from the Chief Minister`s Relief Fund to the families of Raja Rishidev and Yogendra Rishidev. Kumar also wished for the speedy recovery of Chunchun Rishidev, who was injured in this terrorist attack.

Meanwhile, the security forces in the Union Territory have undertaken many counter-terrorist operations over the past few days and as many as 13 terrorists have been killed in nine encounters between security forces and the terrorists after the civilian killings.