Yasin Malik: Here is the case file of former terrorist and JKLF chief

The CBI has sought the transfer of all cases against Yasin Malik from Srinagar to Jammu. 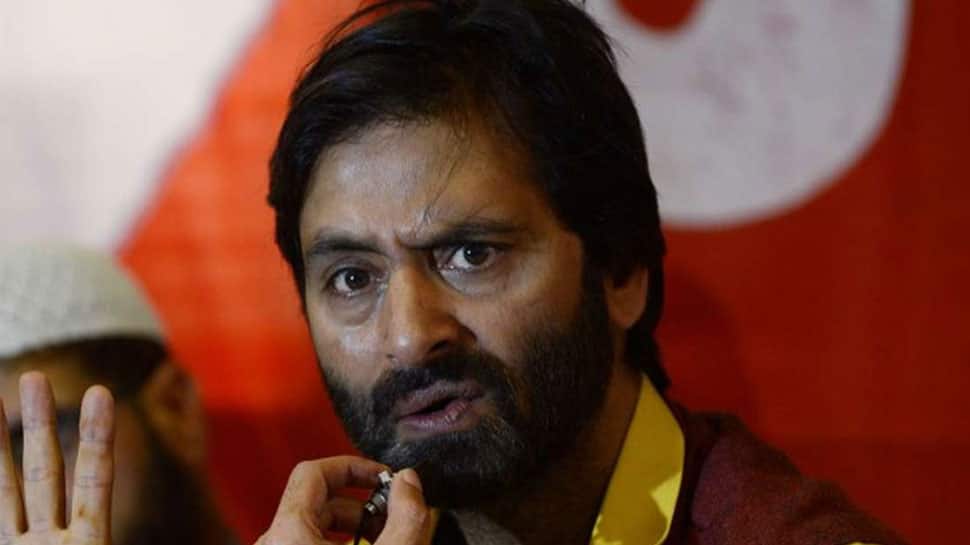 JAMMU: Former terrorist and Jammu and Kashmir Liberation Front (JKLF) chairman Yasin Malik has been booked under the Public Safety Act and shifted to Jammu's Kot Balwal jail. The separatist leader was arrested by police in a late night raid on February 22 from his Maisuma residence and was taken to the Kothibagh Police Station. He has now been shifted to Kot Balwal jail.

Meanwhile, the Central Bureau of Investigation (CBI) has filed a plea in the Jammu and Kashmir High Court seeking transfer of cases against Yasin Malik from Srinagar to Jammu.

The case relates to the killing of four unarmed Indian Air Force officers in January 1990 in Srinagar and also the kidnapping of Rubiya Saeed, daughter of the then Union home minister Mufti Mohammad Saeed. The IAF officers were shot dead in Srinagar's Sannat Nagar on January 25, 1990.

Malik can be kept in detention for up to two years under the PSA without any judicial intervention.

The chief justice of J&K High Court, Gita Mittal, has sought a response from Yasin Malik on the plea. Next date of hearing is March 11.

CBI's plea for transfer of cases to Jammu is being seen as a bid by the Narendra Modi government to expedite the cases against Yasin Malik that have been pending for more than 29 years.

Yasin Malik is the main accused in the kidnapping of Dr Rubiya Sayeed, daughter of former Jammu and Kashmir chief minister Mufti Mohd Sayeed, and killing of four IAF personnel in Srinagar in 1990.

Rubaiya Saeed, the daughter of former Union Home Minister Mufti Mohammad Saeed and sister of former Jammu and Kashmir CM Mehbooba Mufti, was kidnapped at gunpoint from a mini-bus while she was on her way home from Lala Ded Hospital in Srinagar where she worked as a doctor. The incident took place on December 8, 1989.

JKLF terrorists were behind Rubiya's kidnapping. They had demanded the release of five of their terrorists who were in prison. After 15 days of hectic negotiations, five terrorists were released by the then Indian government in exchange for Rubaiya’s freedom.

The five terrorists, who were released by the then VP Singh government, were Abdul Hamid Sheikh, a Pakistani terrorist Sher Khan, Noor Mohammad Kalwal, Altaf Ahmed and Javed Ahmed Jargar.

The case was later handed over to the CBI on February 22, 1990. Fourteen years later, JKLF vice Chairman Javed Mir had admitted that he had carried out the kidnapping along with two JKLF top commanders Yasin Malik and Ashfaq Wani. When the terrorists were released, it was Javed Mir who had informed the local press in Srinagar that Rubaiya will be set free soon.

The other case relates to the killing of four personnel of the Indian Air Force on January 25, 1990.

Around 7.30 AM, a group of JKLF terrorists opened fire at 40 IAF personnel who were waiting at the Sant Nagar crossing, Srinagar to board vehicles to go to their respective offices.

CBI, which investigated the case, filed a chargesheet on August 31, 1990, against Yasin Malik and others.

In the FIR, it was alleged that in the morning of January 25, 1990 around 7:30 AM when the Air Force employees, who were living as tenants in the private house at Rawalpora, had gathered and were waiting on the road at Sanat Nagar crossing for Air Force Vehicles to go to their offices, some unknown terrorists fired on them with automatic weapons.

As a result, about 40 Air Force employees including a woman were seriously injured while 2 of them died on the spot.

The chargesheet, in this case, was filed by CBI on August 31, 1990, under Section 120-B read with Section 302 of RPC, Sections 3 and 4 of TADA and Section 27 of Arms Act in the Court of 3rd Additional Session Judge (TADA cases Jammu) against the accused.

Years later, in an interview with BBC, Malik had confessed to having committed the murders of the IAF personnel.

Malik is also accused of killing Justice Neelkanth Ganju, the judge who had given death sentence to JKLF terrorist Maqbool Bhat and former director, Doordarshan Kendra in Srinagar, Lassa Kaul.

The JKLF chief is also reportedly under NIA probe for channelising the terror funds from Pakistan routed to the Gulf countries before being sent to India.

In its plea before the J&K High Court, the CBI has argued that the main accused in the matter namely Mohammad Yaseen Malik is an influential person in Jammu and Kashmir and there is every likelihood that he will influence the proceedings of the matter.

Hence, all cases against him be transferred from Srinagar to Jammu.

In the wake of the Pulwama terror attack that killed 40 CRPF jawans on February 14, the government had launched a massive crackdown on separatists. Several separatist leaders including Jammu Kashmir Liberation Front chief Yasin Malik were detained.

On February 17, the government had announced that the security of six separatist leaders in Jammu and Kashmir was withdrawn. Officials said no security forces or cover would be provided, under any pretext, to them or any other separatists.

On February 15, Union Home Minister Rajnath Singh had said the government was planning to review the security of the people working at the behest of Pakistan and its intelligence agency ISI in an apparent reference to separatist leaders.