BSY told reporters that the Speaker has not yet accepted the resignations of the Congress-JD(S) MLAs which are in a correct format. 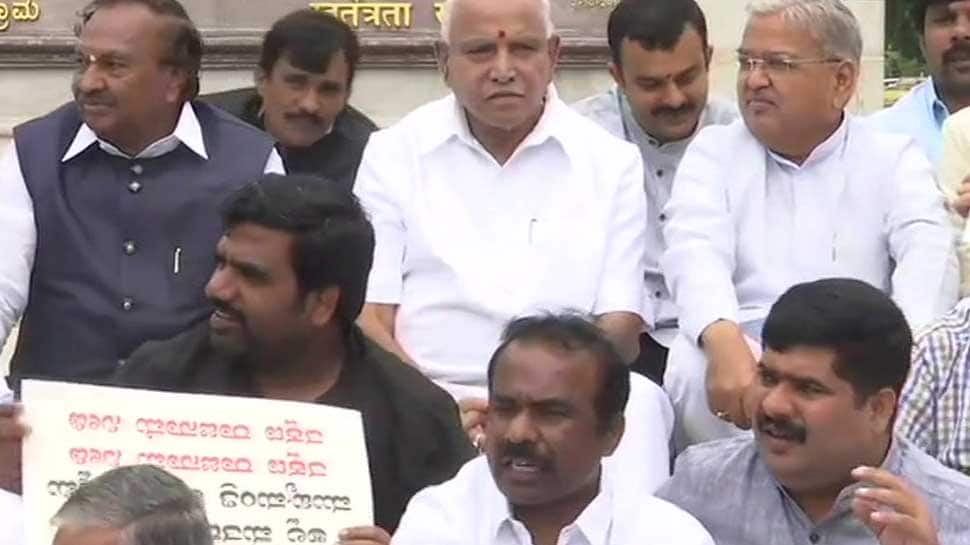 Bengaluru: Karnataka BJP leaders led by former chief minister BS Yeddyurappa on Wednesday sat on a dharna outside the Vidhana Soudha and demanded a floor test claiming that the HD Kumaraswamy-led Congress-JDS coalition has come in a minority after 11 ruling MLAs resigned from the state assembly.

According to ANI, BSY and other state BJP leaders staged a dharna outside the state legislative assembly and said that they will meet the Governor and the Speaker demanding a floor test.

BSY told reporters that the Speaker has not yet accepted the resignations of the Congress-JD(S) MLAs which are in a correct format.

"Now, we have decided to sit in dharna in front of Vidhan Soudha in front of Gandhi Chowk. We will meet the Governor and the Speaker. According to the Speaker, 5 to 6 persons have submitted their resignation in the correct format. Then why is he delaying this? He must accept them immediately. I will talk to Ramesh Kumar," the Lingayat strongman said while speaking to media in Bengaluru.

On July 9, Karnataka Assembly Speaker KR Ramesh Kumar had said that the resignation letters of the eight out of 13 MLAs of the ruling coalition were not in the prescribed format and later asked the legislators to submit them properly.

In a new twist to the continuing political crisis in Karnataka, the dissident MLAs of the ruling Congress-JDS coalition on Wednesday knocked at the doors of the Supreme Court seeking its urgent intervention in the matter.

Supreme Court is expected to hear the matter on Thursday.

Amid high drama, Karnataka Minister and senior Congress leader DK Shivakumar reached the hotel in Mumbai, where rebel Congress-JD(S) MLAs are staying, in a bid to pacify them on Wednesday.

However, he was greeted by "Go back, Go back - Shivakumar go back" slogans raised by the supporters of one of the disgruntled JD(S) MLAs, Narayan Gowda, outside the Mumbai hotel.

Speaking to reporters outside the Renaissance Mumbai Convention Centre Hotel where the dissident MLAs are staying, Shivakumar said, "I have booked a room here. My friends are staying here. There has been a small problem, we have to hold negotiations. We can`t go for a divorce immediately. There is no question of threatening, we love and respect each other."

The Mumbai Police escorted Shivakumar away from the gates of the hotel.

Security was tightened outside the hotel after the rebel MLAs wrote a letter to Mumbai Commissioner of Police on Tuesday seeking protection. Their letter stated,  "We have heard Chief Minister and DK Shivakumar are going to storm the hotel, we feel threatened."

"We do not want to meet him (Shivakumar), kind request to help us in this matter and do not allow them to enter the hotel premises," the letter added.

The 13-month old Congress-JD(S) government slumped into crisis following the resignation of 11 MLAs from the membership of the state Assembly last week.

The Congress-JD(S) coalition is making all efforts to protect its government which seems to have fallen short of a majority.

Chief Minister HD Kumaraswamy has also claimed that they will overcome the current crisis. All the ministers from the two parties have resigned paving way for the restructuring of the state Cabinet in a bid to accommodate the dissident MLAs.

The Congress party has been constantly accusing the BJP of conspiring to topple Congress-JD(S) coalition government in Karnataka.

However, Defence Minister Rajnath Singh, in his reply in Parliament, asserted that his party is committed to parliamentary democracy and has no relation with the developments in Karnataka.