Hours after a violent mob went on a rampage on the streets of Bengaluru and attacked the residence of a Congress MLA and police stations in KG Halli area in the city, the Bengaluru Police have nabbed a local SDPI leader Muzammil Pasha for allegedly inciting the riots. 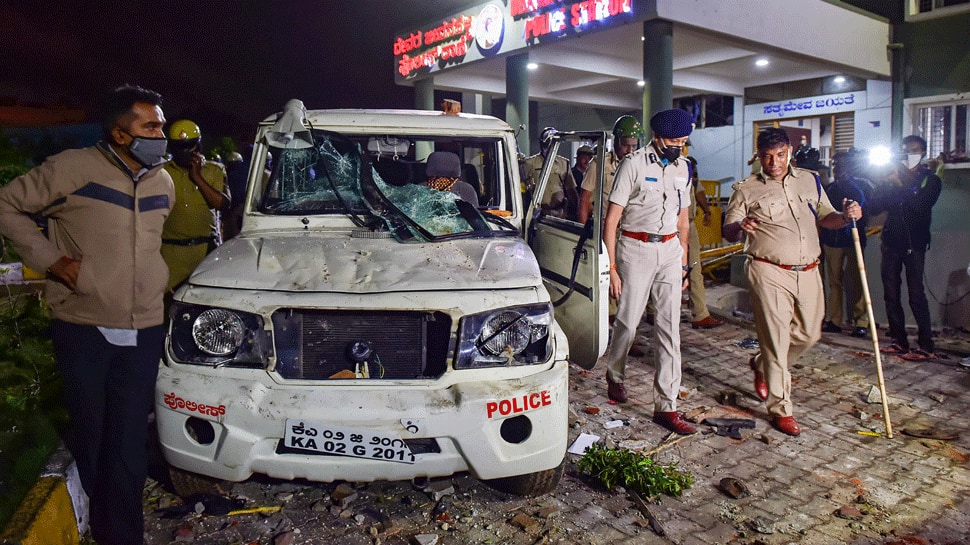 BENGALURU: Hours after a violent mob went on a rampage on the streets of Bengaluru and attacked the residence of a Congress MLA and police stations in KG Halli area in the city, the Bengaluru Police have arrested a local SDPI leader Muzammil Pasha for allegedly inciting the riots in the city, sources said on Wednesday (August 12, 2020).

According to the sources, the Bengaluru Police have arrested Muzzamil Pasha, who is a political activist belonging to the SDPI. The arrested accused had also contested the BBMP (Bruhat Bengaluru Mahanagara Palike) election in the past from Sagayapura ward unsuccessfully.

Besides Muzamil, another SDPI activist Ayaz is also under the scanner for provocating the rioters to vandalise the two police stations at DJ Halli and KG Halli area in East Bengaluru. It is alleged that the violence was fully pre-planned and police are investigating it from all angles. Special police teams are combing the area and 150 people have been arrested so far.

Karnataka Minister CT Ravi said, “I think it was a planned riot. Within an hour of a post on social media thousands of people gathered and damaged 200-300 vehicles and MLA's residence. We'll take serious action. It was an organised incident. SDPI is behind it.”

“The incident that took place last night is very unfortunate. A lot of damage has been caused to public property. I appeal to all the people of the city not to be provoked or disturbed by this incident,” GN Shivamurthy, Deputy Commissioner, Bengaluru Urban, said.

The police have also recovered CCTV footage which allegedly showed that a person distributing money to rioters ahead of the violence. The CCTV footage indicates that the attacks against the police station were a pre-planned act as the rioters were already mobilised through social media posts.

Sources said that over 50 people have got injured in the violent clashes. Karnataka Chief Minister BS Yediyurappa on Wednesday (August 12) ordered the concerned authorities to take strict action against those involved in the incident.

CM Yediyurappa noted that all possible steps have been taken by the government to maintain law and order in the city. The Karnataka CM appealed to people to maintain peace and asserted that violence against journalists, police and people was unacceptable. The Congress party has also appealed for peace in the city.

Bengaluru Police Commissioner Kamal Pant said that restrictions under CrPC Section 144 have been imposed in the city and curfew has been imposed in DJ Halli and KG Halli police station limits to keep the situation under control. He added that accused Naveen has been arrested for sharing the derogatory post on Facebook.