He also added that they will send a memorandum to Union Home Minister Rajnath Singh. 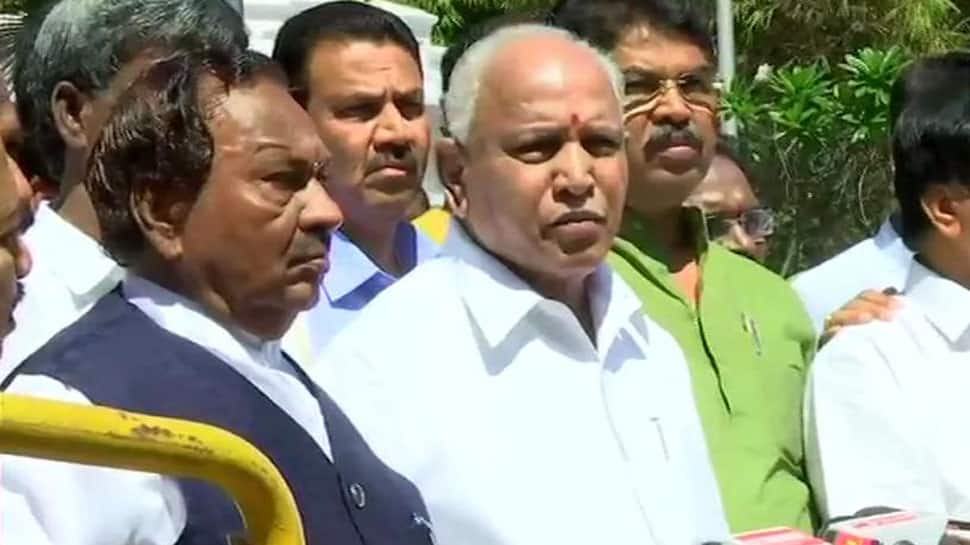 BJP leader BS Yeddyurappa, along with a BJP delegation, on Thursday submitted a memorandum to the Karnataka Governor Vajubhai Vala against the stone pelting on the residence of BJP legislator in Hassan. He also added that they will send a memorandum to Union Home Minister Rajnath Singh.

"We have submitted a memorandum to the Governor over the incident of stone-pelting at the residence of Preetham Gowda (BJP MLA from Hassan) and manhandling of his family. We will also send a memorandum to Home Minister Rajnath Singh," said Yeddyurappa.

Yeddyurappa led a BJP delegation to meet the governor on the incident that took place on Wednesday evening.

Speaking to media after the stone pelting incident, Yeddyurappa had said: “We are meeting the governor in the morning to mark our protest against the hooliganism which is happening here under the leadership of Chief Minister HD Kumar Swamy. They think Hassan is their territory. I condemn this act. Our party workers need not to be afraid as we are with them."

On Wednesday, JD(S) workers allegedly pelted stones at the residence of BJP MLA Preetham Gowda here, after an audio recording, purportedly featuring Gowda went viral. One BJP worker got injured in the incident.

According to media reports, in the audio clip, Gowda, is allegedly heard commenting on the health of JD(S) supremo HD Deve Gowda. The BJP MLA claimed that the voice is not his. Reportedly, Gowda in the clip is telling a man named Santosh that JD(S) supremo Deve Gowda “would die soon” and Chief Minister HD Kumaraswamy “is unwell” and that JD(S) “will soon be history.”

Reacting on the issue, Karnataka Chief Minister HD Kumaraswamy had said, "Mysore IG and Hassan SP briefed me on it. As per info, some followers of Deve Gowda were holding a protest over statements made against him. Some BJP workers provoked them and the incident happened."

"I have asked the police to probe the matter and take strict action," he had asserted.