All eyes are on BS Yeddyurappa who is now once again set to become the Karnataka CM. 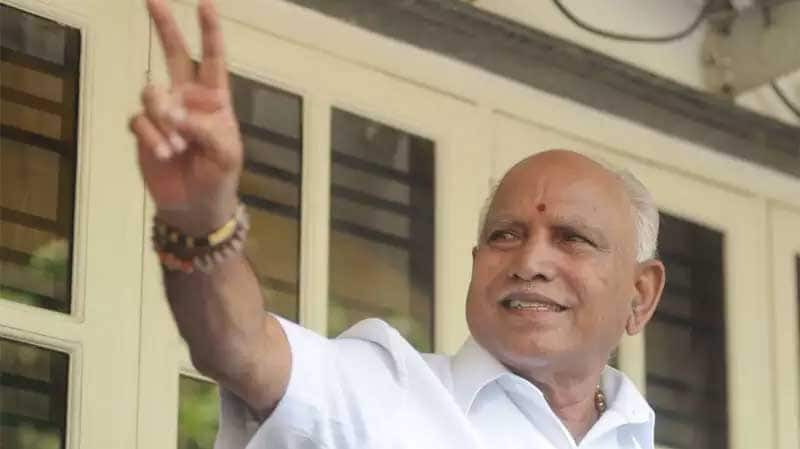 Bookanakere Siddalingappa Yeddyurappa has been the stem on which the Bharatiya Janata Party's lotus has long balanced itself in the murky waters of Karnataka politics. Political storms have come and gone but the lotus has refused to drown. A massive credit for this goes to the 76-year-old who has seen it all.

A three-time CM, Yeddyurappa's most-recent stay in office was also his shortest at just two days. The exit was teary-eyed as Yeddyurappa resigned as CM just moments before a floor test in the Karnataka Assembly back in May of 2018, paving the way for Congress-JDS alliance to come together and propel HD Kumaraswamy as the new CM.

Time waits for no one and tables continue to turn in Indian politics.

Now, Yeddyurappa stands on the cusp of possibly returning as CM of the state once again as a number of resignations from Congress and JDS MLAs have put the coalition in troubled waters.

If Kumaraswamy fails to show the numbers, the collapse could be every bit as epic as the fall of Yeddyurappa more than a year ago. But falling and then rising has been an integral part of the BJP veteran who has weathered every storm with grit and determination.

A hard-boiled RSS Swayamsevak, Yeddyurappa joined the right-wing Hindu outfit when he was barely 15, and cut his political teeth in the Jana Sangh, the BJP's forerunner, in his home-town Shikaripura in Shivamogga district. He became the Jana Sangh's Shikaripura taluka chief in the early 1970s.

A Bachelor of Arts, Yeddurappa, who was jailed during Emergency, worked as a clerk in the Social Welfare Department before taking up a similar job at a rice mill in his native Shikaripura.

Yeddyurappa, also referred to as BSY, would eventually make his debut in the Legislative Assembly in 1983 and went on to win from Shikaripura five more times.

By 2004, Yeddyurappa had gained enough political acumen to be the face of the BJP. He was also all set to be the CM when the party emerged with the maximum number of seats in the election that year. It was not meant to be as Congress and Janata Dal Secular would join hands to form the government under Dharam Singh.

An enemy's enemy is a friend was proven when Yeddyurappa - in 2006 - joined hands with Kumaraswamy to topple the Dharam Singh government after the chief minister was indicted by Lokayukta in an alleged mining scam. It was decided that the CM's post would be on a rotational basis and Yeddyurappa would become Kumaraswamy's deputy. When the time came for the two to exchange roles, Kumaraswamy backtracked leading to the government collapsing.

Two years later, the Lingayat strongman would lead BJP to a comprehensive win and help the party form its first government in any of the southern states.

Power attracts controversies and so it was with Yeddyurappa as well. It was alleged that he had abused his power to favour his sons in allotment of land in Bengaluru.  His subsequent indictment by Lokayukta in an illegal mining scam forced him to resign on July 31, 2011. He would eventually be behind bars for a week.

In the years that followed, Yeddyurappa's status and clout grew in the BJP. There was even more good news to come.

In April of 2016, Yeddyurappa was appointed the state BJP chief for the fourth time. On October 26 of 2016, he got a huge relief when a special CBI court acquitted him, his two sons and son-in-law in a Rs 40-crore illegal mining case, which had cost him the chief minister's post in 2011.

In the 2018 Assembly election, the BJP would once again emerge as the single-largest party even though the majority mark remained elusive. The party moved swiftly to stake claim to form the government and Yeddyurappa once again became the CM. On the floor of the House, however, he tendered his resignation barely 48 hours after being sworn in as expected numbers were not likely to remain elusive.

In the subsequent months, Yeddyurappa has kept a close watch on the shaky Congress-JDS alliance. A long list of allegations have been made against the state government but even Yeddyurappa would perhaps admit that tensions within the coalition partners have helped him and the BJP.

Life came a full circle, once again, for Yeddyurappa with Kumaraswamy losing the crucial trust vote on Tuesday (July 23). All eyes are now on the BJP leader who could be invited to form the government by the Governor.

HD Kumaraswamy: Journey from a rebel to Chief Minister of Karnataka