Relief operations were in full swing in Karnataka`s flood-hit Kodagu district as rains abated and life limped back to normal, an official said on Tuesday. 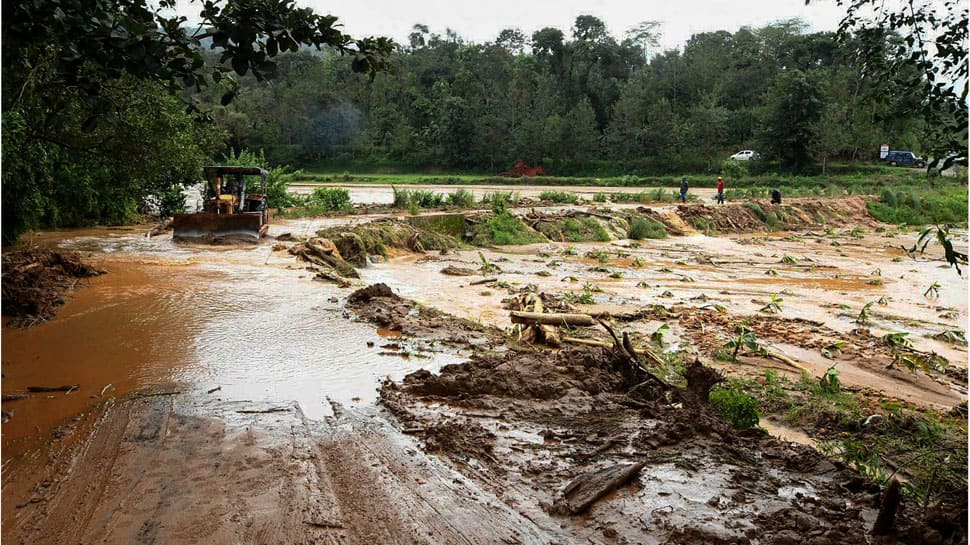 Bengaluru: Relief operations were in full swing in Karnataka`s flood-hit Kodagu district as rains abated and life limped back to normal, an official said on Tuesday.

"We are concentrating on providing shelter and other relief to the people evacuated from towns and villages in the hilly areas flooded by rains and blocked by landslides," Kodagu Deputy Commissioner P. Sreevidya told reporters at Madikeri, about 270 km from here.

Though rescue operations slowed down as flood waters receded, the administration is using drones to look for people reported missing or stranded in remote areas or villages where landslips were witnessed.

"We are receiving huge quantities of relief material, especially food items, drinking water, clothes, utensils, mats and tarpaulin from Bengaluru, Mysuru, Mangaluru, Udupi and other places in the state.

"Food, warm clothing, medical care, baby feed, bedsheets and other essential items have been distributed in the relief camps.

"Essential items, including medicines, have been rushed to 51 relief camps housing 7,594 people across the district," said Sreevidya.

The administration has also rushed food grains and other provisions to towns and villages across the district, as heavy rains and floods disrupted supplies over the last 10 days due to landslides and roadblocks.

"Besides state officials, hundreds of volunteers from non-government organisations are helping us in looking after those staying in the relief camps. It will take a week before they can return to their homes as restoration works are slow due to extensive damage caused by floodwaters," the officer said.

According to initial estimates, the cumulative loss in the ravaged district is said to be about Rs 2,000-Rs 3,000 crore due to heavy damage to infrastructure like roads, bridges, power lines, apart from houses and agricultural crops.

Two MI-17 helicopters of the Indian Air Force (IAF) took off for relief work in Kodagu, operating from Kushalnagar, Periapatna and Harangi.

"Helicopters undertook aerial recce and rescue missions in flood-affected areas of Monnangeri and Jodupala to identify ground rescue in coordination with district officials," the IAF training command said in a statement here.

The choppers were also used in airlifting essentials to the affected areas.

State Relief Commissioner Gangaram Baderiya said here later that the joint rescue operation was in the last leg, as rainfall had considerably reduced.

"No distress call was received since Monday. Rescuers are trekking and screening other villages. Till Tuesday, 4,390 people were rescued and brought to safety by NGOs and local communities," said Baderiya in the statement.

The Border Road Organisation has deputed engineers and army engineering task force to assist in clearing debris and restoration work.

Temporary structures using 2,000 aluminium sheets to house about 10,000 homeless people displaced due to landslides will be built on priority.

The district administration has also ordered hotels, resorts, homestays and guesthouses to cancel bookings till August 31 due to the havoc wrought by heavy rains in the hilly region.

Meanwhile, the state Bharatiya Janata Party (BJP) unit has rushed 10 tonnes of food grains and other relief material to the affected in Kodagu in trucks from Bengaluru.

The Commissioner has also requested the public, philanthropists, NGOs and companies to contribute money to the Chief Minister`s Calamity Relief Fund through cheque or draft.