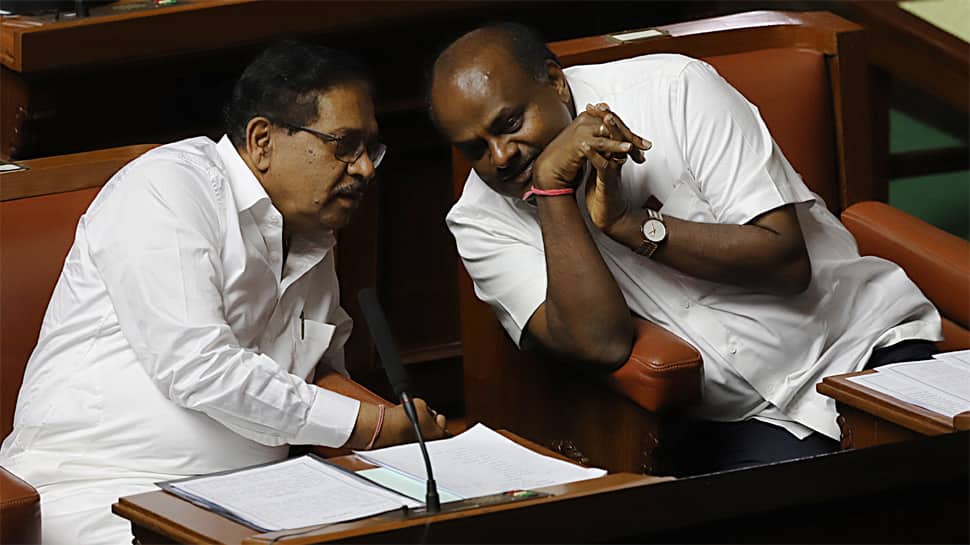 The Congress-Janata Dal Secular government in Karnataka received a big jolt on Wednesday when the Supreme Court ruled that the 15 rebel MLAs cannot be forced to take part in the trust vote in the state Assembly on Thursday. Short by 15 MLAs, Chief Minister HD Kumaraswamy has been pushed to the wall to keep his government afloat in the state.

If the 15 MLAs skip the voting or if their resignations are accepted, the effective strength of the House will be reduced to 210, including the Speaker. In such a case the halfway-mark for the government to prove its majority is 106. But having lost the support of 15 MLAs, the Congress-JDS government has just 102 MLAs by its side. As of now, they have the support of the lone BSP MLA. The Anglo-Indian MLA which the government nominated may also be expected to vote in favour of the combine. Despite the support of these two, the numbers are stacked strongly against them.

The Bharatiya Janata Pary (BJP), on the other hand, seems to be comfortably placed. With 105 MLAs plus the support of one Independent MLA and one Karnataka Pragnyavantha Janatha Party MLA, it can prove its majority in the House with ease.

To understand the political equation in the state, let's rewind to May 2018 when the Karnataka Assembly election results were announced. The BJP emerged as the largest party with 105 MLAs but fell short of the half-way mark in the 225-member Assembly. Despite being short of numbers, BJP leader BS Yeddyurappa took oath as the Chief Minister of the state and sought time to prove his support in the House.

Governor Vajubhai Vala gave Yeddyurappa 15 days to prove his majority, a decision which was in no time overturned by the Supreme Court which cut short the period given to him to conduct the floor test. Unable to get the numbers by his side, an emotional Yeddyurappa stepped down from his post.

Putting in all its efforts to not let a BJP government be formed in the state, the Congress with 79 MLAs rallied behind the JDS and gave its support to form a coalition government. Despite having more numbers, the Congress let JDS, which had 37 MLAs, take the lead and Kumaraswamy took over as the Chief Minister at an event which looked like a show of strength of all opposition parties. The combine also had the support of a BSP MLA, taking the total strength to 117, comfortably over the majority mark.

However, with the coalition unevenly balanced the government has had several hiccups since its formation.

Thirteen months later, July 2019, the tension in the coalition seems to have hit the peak, with the Congress-JDS government facing a stiff battle of survival. Fifteen of its MLAs have rebelled against the government and have resigned from the membership of the Assembly. With the Speaker not accepting their resignations, the MLAs approached the Supreme Court urging the apex court to intervene in the matter.

However, the SC sided with the rebel MLAs and ruled that no one can be compelled to attend the Assembly proceedings. While the Supreme Court refused to set a deadline for the Speaker, the top court bench headed by Chief Justice Ranjan Gogoi said that the matter should be resolved at the earliest.

While the BJP has maintained that it has no role to play in the mass resignations, Yeddyurappa, who had become the chief minister for the shortest period in May 2018, will in no circumstances miss the opportunity to stake claim to form the government if the Kumaraswamy government fails to prove its majority in the state on Thursday.