BJP, led by its chief BS Yeddyurappa, intensified its two-day sit-in over issues, including sale of land in Ballari to JSW Steel at a "throw away" price, drought and farm loan waiver. 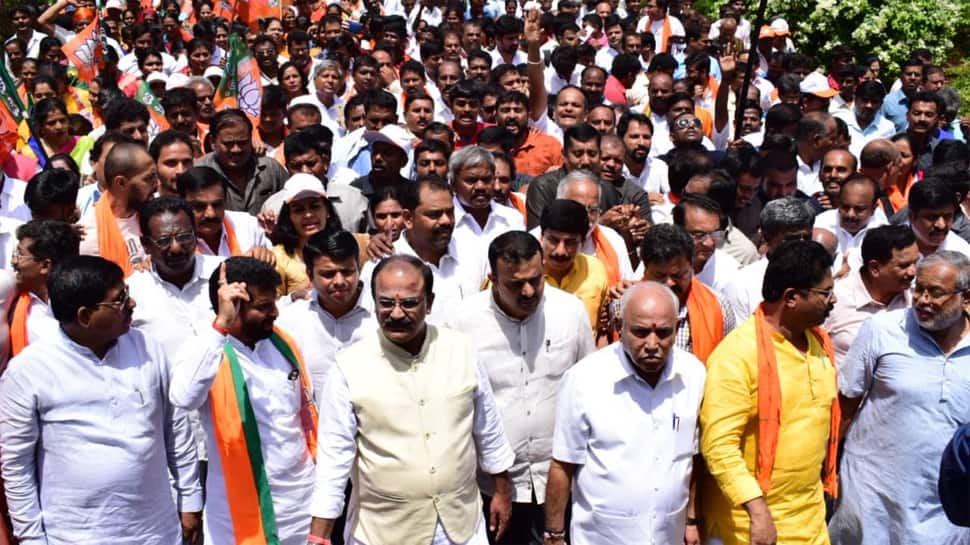 Bengaluru: Karnataka Chief Minister HD Kumaraswamy on Sunday offered to hold talks with opposition BJP on issues raised by it even as the saffron party workers courted arrest while attempting to proceed towards his official residence despite police barricades.

As the state BJP, led by its chief BS Yeddyurappa, intensified its two-day sit-in over issues, including sale of land in Ballari to JSW Steel at a "throw away" price, drought and farm loan waiver, Kumaraswamy, in a letter to the opposition leader, said he was prepared to discuss all matters.

"I am always ready to discuss with you. Steps will be taken to seek your time as per your convenience," the chief minister said in the letter to Yeddyurappa, a copy of which was released to the media.

However, the BJP went ahead with its plan as the leaders and workers, who were on a round-the-clock sit-in at Anand Rao circle here since Friday, attempted to proceed toward the chief minister's residence despite heavy police presence and barricades in the area. The protesters were stopped by police and huddled into buses as they tried to break through the barricades.

In the ensuing melee, a few BJP leaders including, former deputy chief minister R Ashok, suffered some bruises. The protesters were taken to a nearby police ground and let off later, police said.

In his letter, Kumaraswamy informed Yeddyurappa about the measures taken to tackle the drought situation and added the loan waiver scheme for farmers in progress. Regarding the sale of land to JSW Steel company, the chief minister said the matter would be referred to the cabinet sub-committee.

The Karnataka cabinet had recently decided to convert the lease of 3,667 acres of land in Ballari district to JSW Steel into sale, in accordance with the initial agreement.

Caught in a row, the state cabinet Friday decided to refer its decision to a cabinet sub-committee for reconsideration, which Yeddyurappa termed as "eyewash".

Responding to the chief minister's message, the BJP tweeted, "After (former chief minister) Siddaramaiah became the coordination committee chairman, you too got the disease of sleeping. You woke up only now though the opposition (BJP) leaders were holding a sit-in demonstration since Friday morning."

"Invitation for talks just ahead of laying siege to chief minister's house is a commitment or a publicity stunt?" it asked in the tweet.