Shivakumar steps in to defuse crisis in Karnataka, stops 4 MLAs from resigning

Crisis brewed in the state after the 12 legislators reached Speaker Ramesh Kumar's chamber at state Vidhan Sabha to tender their resignation. 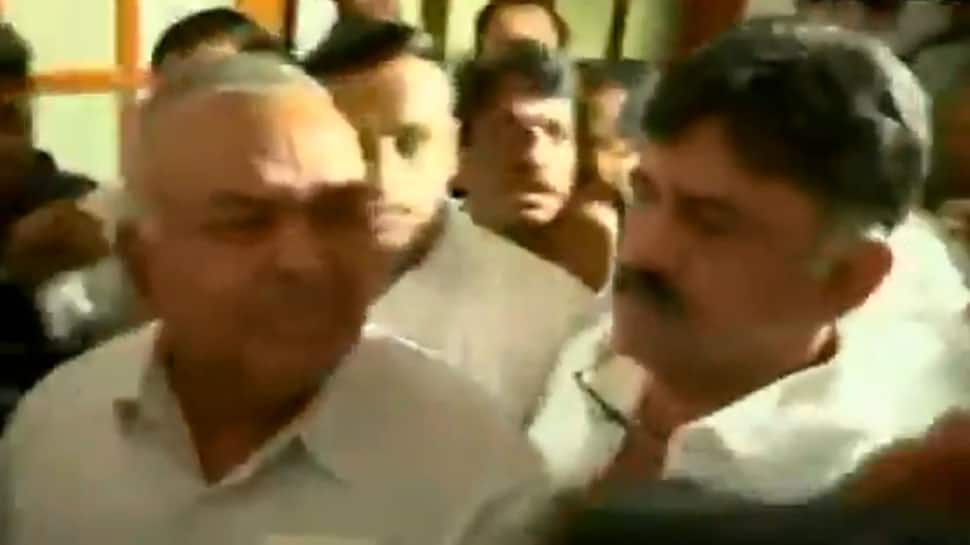 BENGALURU: Karnataka minister DK Shivakumar partially succeeded to diffuse the crisis situation in the state, managing to stop the resignations of four out of the 12 MLAs from Janata Dal (Secular)-Congress collation government in Karnataka. The 12 legislators had reached Speaker Ramesh Kumar's chamber at state Vidhan Sabha to tender their resignations.

Shivkumar has rushed to the Vidhan Sabha to stop the mass resignations. "Nobody will resign. I have come to meet them," said the water resources minister. Deputy Chief Minister G Parameshwara and Shivakumar also have reportedly called an emergency meeting of Bengaluru Congress MLAs and corporators.

State Chief Minister HD Kumaraswamy is currently on a foreign tour and will arrive in Bengaluru on Sunday.

In the 225-member Karnataka Assembly, the BJP has 105 seats, Congress 78 seats and JD(S) 37 seats. The BSP and the KPJ party have one seat each. There is also an independent and one Speaker. The halfway mark in the house is 108.

While speaking to media outside the Speaker's office, Ramalinga Reddy expressed unhappiness over treatement bellowed out to them by Congress high command. "I am not going to blame anyone in the party or the high command. I somewhere feel I was being neglected over some issues," he said.

Speaking on the development, BJP MP GVL Narasimha Rao said, "Congress-JD(S) coalition has been rejected by people of Karnataka. Despite their coalition in Lok Sabha polls, BJP won a massive mandate. It clearly shows the mood of people. MLAs certainly seem to be facing brunt of public anger against coalition."