The cover page of the Kerala Budget document carried a painting by a Malayalam artist about Mahatma Gandhi's assasinaation. 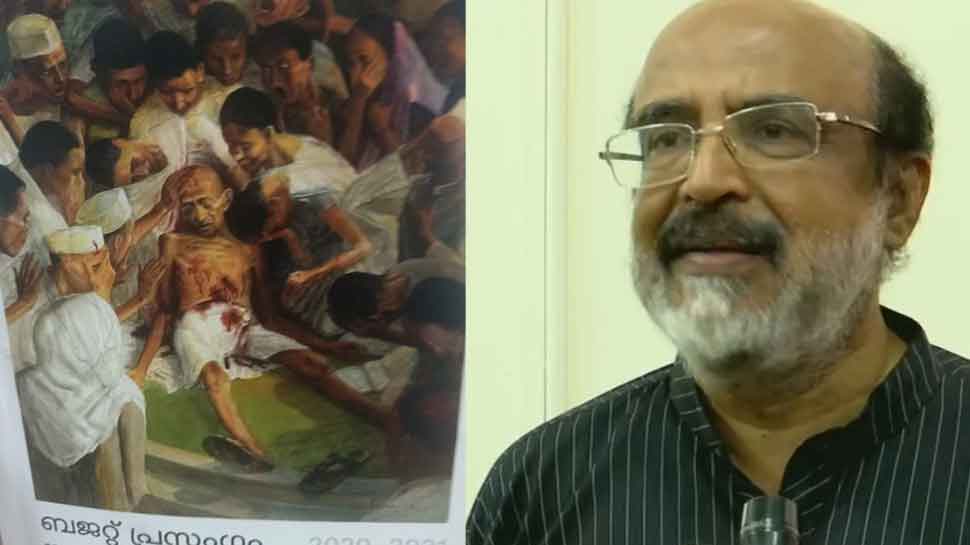 Thiruvananthapuram: Kerala Chief Minister Pinarayi Vijayan led-LDF government's Budget 2020-21, which was tabled in the state assembly on Friday, depicted the assassination of Mahatma Gandhi on its cover page as a mark of protest against the Centre over the National Register of Citizens (NRC). According to reports, the cover page of the Kerala Budget document carried a painting by a Malayalam artist about Mahatma Gandhi's assassination.

Commenting on the issue, Kerala Finance Minister Thomas Isaac said, ''Definitely, it is a political statement, the cover of my budget speech. It is a painting by a Malayalam artist of Mahatma Gandhi's murder scene.''

''We are sending out a message that we will not forget who murdered Gandhi,'' the Minister added.

Explaining the reason for depicting the Mahatma Gandhi's murder on the cover page of Budget document, Thomas Isaac said, ''This is important at the times when history is being re-written. There is an attempt to erase some popular memories and use the National Register of Citizens (NRC) to divide the population on communal lines. Kerala will stand united.''

Thomas Isaac also made a scathing attack on the Narendra Modi regime at the Centre, saying that the BJP-led NDA government was "strangulating" the southern state by denying funds.

Presenting the 2020-21 budget in the assembly, the state Finance Minister alleged that the Centre has been "helping" corporates rather than the common man.

"The Centre has been strangulating Kerala by denying funds for the state and has been moving on a self-destructive path by corporate-friendly policies and privatisation. The GST implementation has not been beneficial for the state," he said.

"The government proposes 2.5 lakh water connections in the upcoming financial year. We will also construct one lakh houses under Life Mission," the finance minister said.

The budget has allocated Rs 90 crore for Pravasi Welfare Fund and the government proposes power projects with a capacity of 500 MW.

"The government proposes Kochi development plan with a fund of Rs 6,000 crore. The city will get a unified travel card and the Metro project will be extended," Issac said.

The state government has increased all welfare pension funds by Rs 100, allotted Rs 40 crore to paddy farmers and Rs 10 crore for startups in the state.

The local self-governments have been allotted Rs five crore for waste management, Rs 20 crore has been set apart for 1,000 food stalls under hunger-free Kerala, where meals will be made available at Rs 25.