Elections to the BMC and nine other civic bodies in Maharashtra have virtually turned into a battle of prestige for Devendra Fadnavis and Uddhav Thackeray. 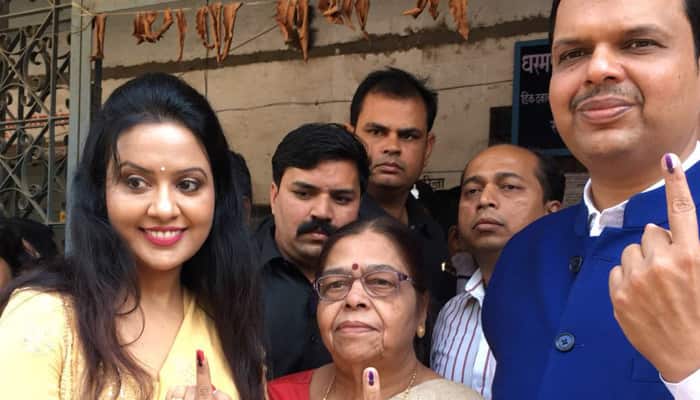 The election, which will also pick 11 Zilla Parishads and 118 Panchayat Samitis, is widely seen as a referendum on Chief Minister Devendra Fadnavis.

By close of balloting, an estimated 50 per cent of Mumbai's 9.2 million (92 lakh) electorate had voted. Early voters included political leaders as well as Bollywood actors.

The voter turn-out for Zilla Parishads in Maharashtra was 48.25 percent till 3.30 pm.

About 42.80 percent voters today exercised their franchise in the first eight hours - till 3.30 in the afternoon - of polling for 10 municipal corporations across Maharashtra, as per PTI.

Thank you #Mumbai for the record voting percentage & people from all Municipal Corporations & ZP for participating in festival of democracy!

Residents of three out of 19 buildings of MIG Colony in Mumbai`s East Bandra, summing up to at least 100 voters, did not find their names on the list. They, reportedly, voted in the previous elections, but this year, their names were missing from the list. The Polling Officer told the voters they need to lodge a complaint in this regard. 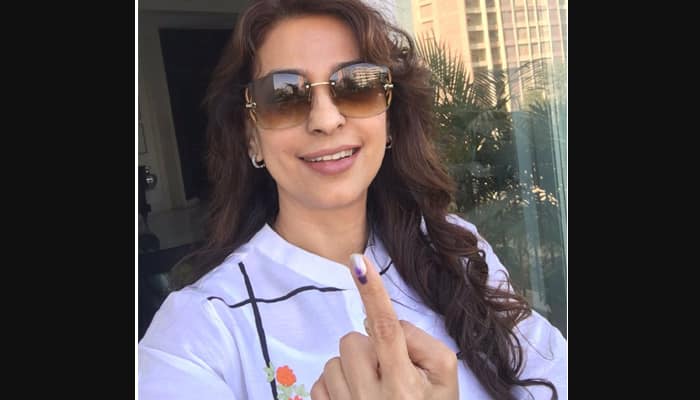 BMC Election 2017: Brihanmumbai Municipal Corporation poll results will be declared on this date | Who will win - BJP or Shiv Sena?

A bridegroom, Mahesh Nawale, casts his vote before marriage at Navbharat Vidyalaya in Parel, Mumbai. 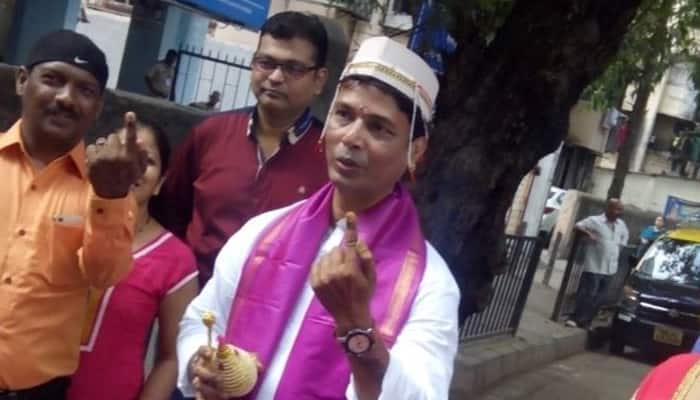 Late Shiv Sena chief Bal Thackeray's daughter-in-law Smita Thackeray embarrasses the party, tells India Today: "Problems have remained unresolved for years. I myself had to face problems, in spite of being from the family."

Sachin Tendulkar and his wife arrive to cast their votes at a polling booth in Mumbai.

Actor Varun Dhawan arrives to cast his vote at a polling booth in Bandra, says "upsetting that I couldn't find my name on the voter list". "My name has not shown up on the list, unfortunately. It`s bizarre because I voted last year. I will find out from EC where is my name," Dhawan tells reporters. 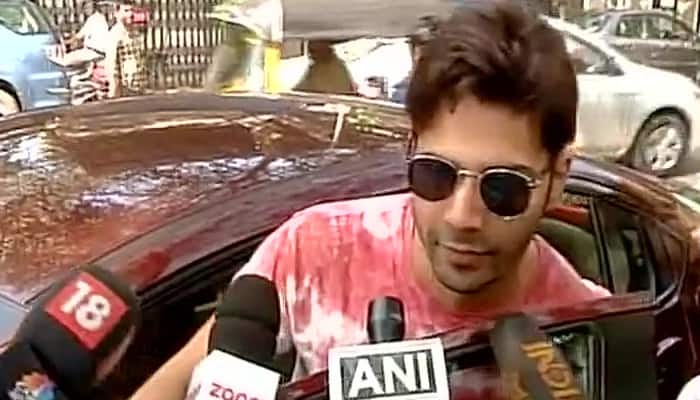 By 10 am, Mumbai notched around 10 percent balloting from the 9.20 million strong electorate. 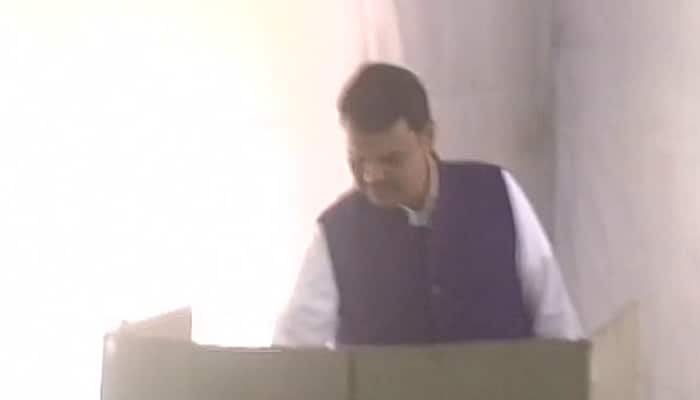 Shiv Sena Chief Uddhav Thackeray, accompanied by his wife and son, queues up at a polling booth in Mumbai's Bandra East. 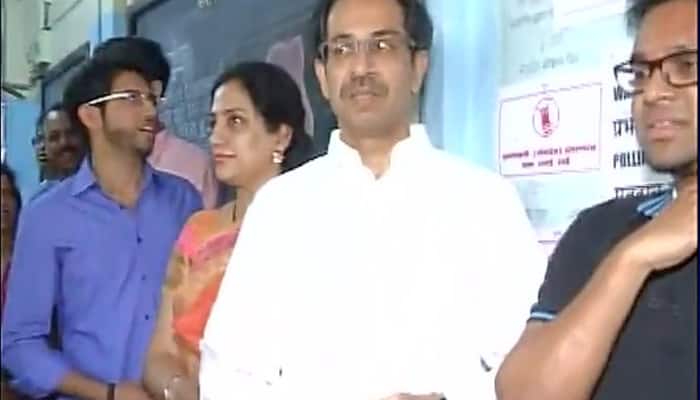 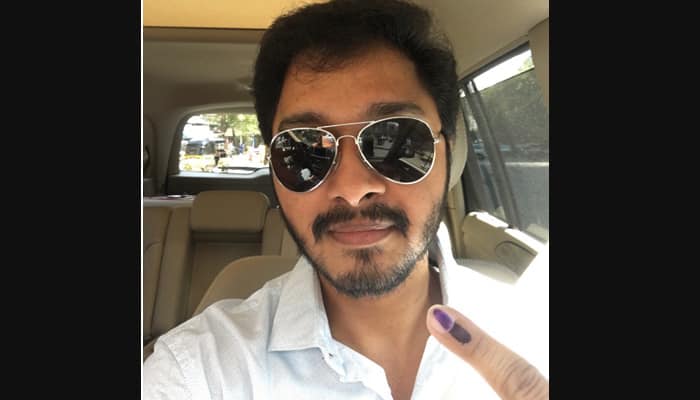 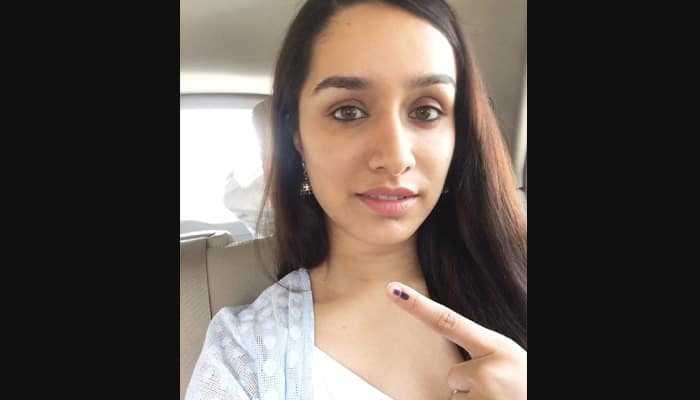 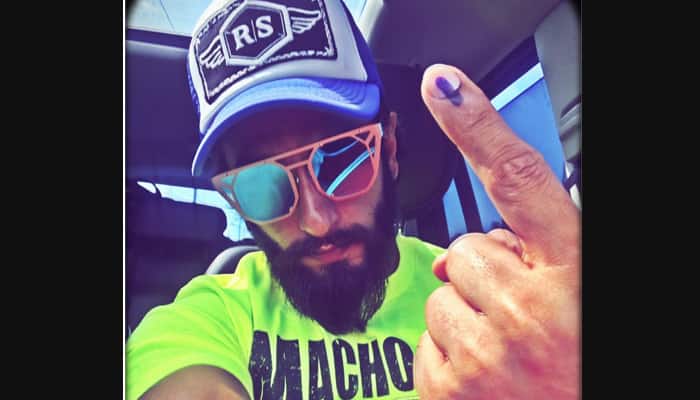 Around 8.33 percent voting was recorded in the first two hours of polling across 10 municipal corporations in Maharashtra. 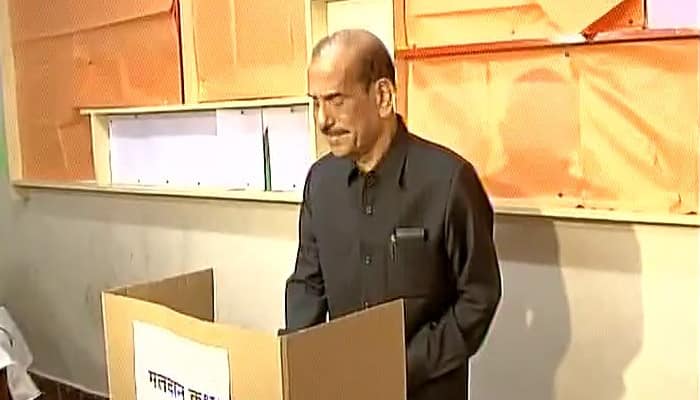 Brihanmumbai Municipal Corporation civic polls: Here's all you should know

Film director and screenwriter Zoya Akhtar casts her vote at a polling booth in Bandra. 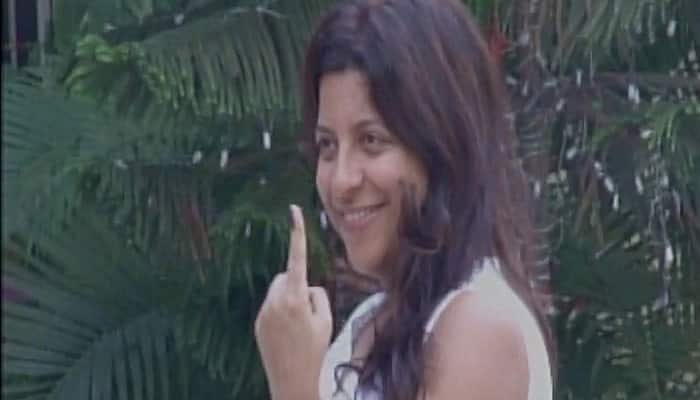 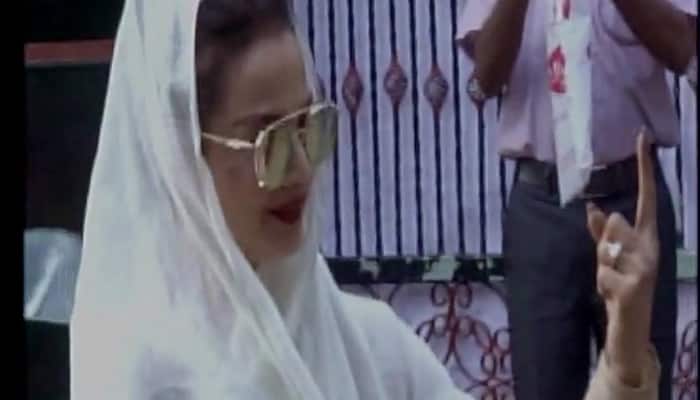 BJP MP Poonam Mahajan tweets: "This is democracy in full bloom! It is not just your right but your responsibility. I cast my vote. Have you?" 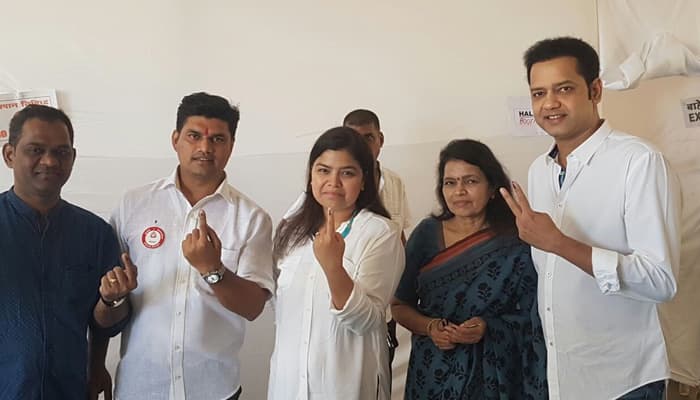 Bollywood actress Anushka Sharma casts her vote and tweets: "Started my morning by casting my vote.Voting  is our duty towards our country & its progress.Pls go out&vote" 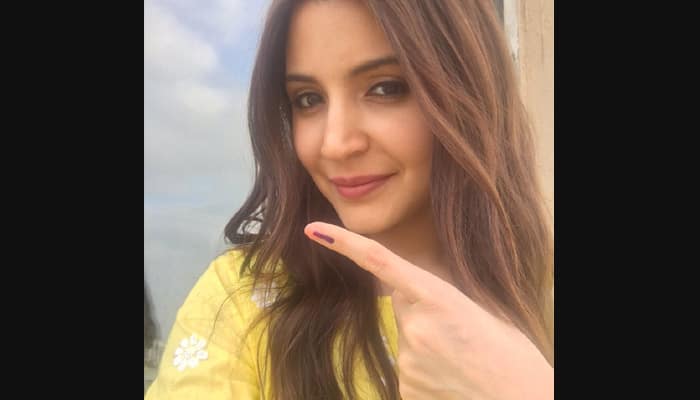 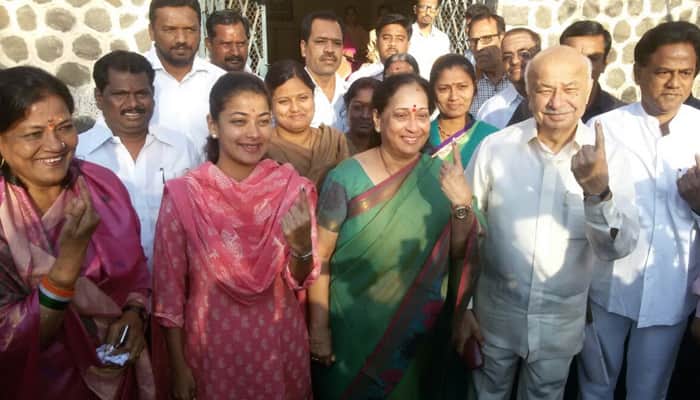 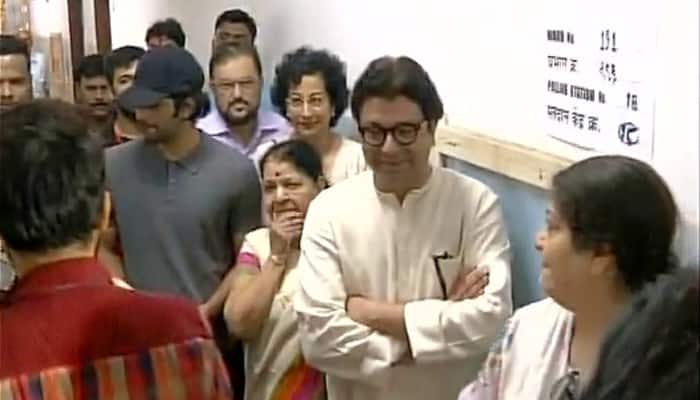 On reports that her name was missing in the voter's list, Shaina NC clarifies on Twitter: "Not true friends ,I did vote. They could not find my name as there was an error in the printed list, however authorities were helpful." 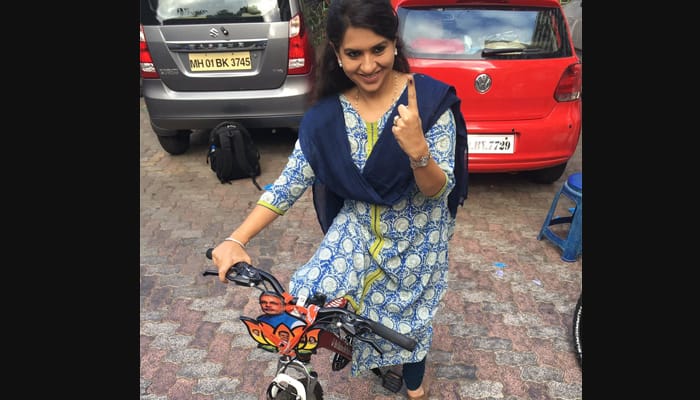 Maharashtra Education Minister Vinod Tawde casts his vote and urges Mumbaikars to do the same. "Mumbaikars, strengthen the roots of democracy and cast your votes for the city we call home. Make each vote count! #MumbaikarVoteKar," tweets Tawde. 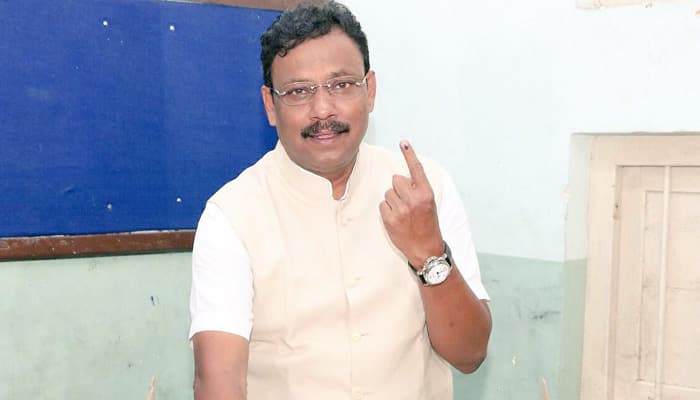 Speaking to the media after casting his vote, Gadkari urges voters to choose deserving and meritorious candidates keeping aside caste, creed and religious considerations.

The minister hopes that this time the voting percentage will go up to 70. 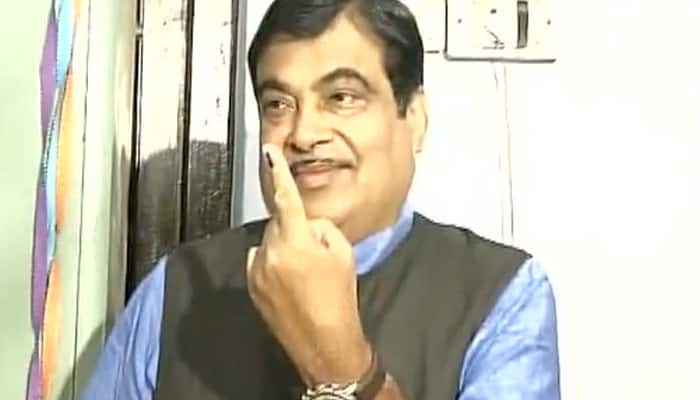 BJP leader Shaina NC arrives to cast her vote at Nepean Sea Road polling booth on a cycle. She, however, could not find her name in the voter's list. 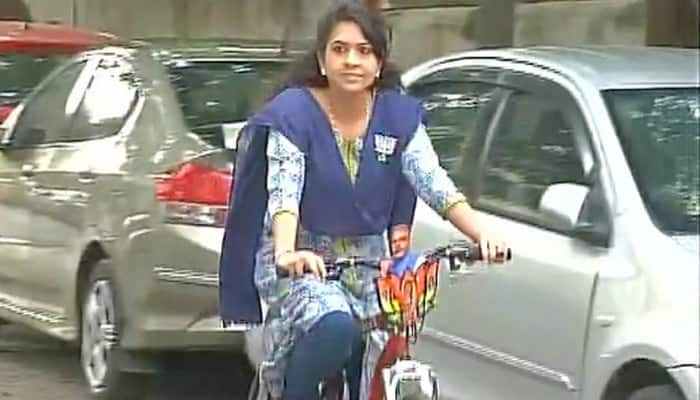 The Bharatiya Janata Party exudes the confidence of securing a majority in BMC polls. "This time the BJP will definitely get a majority, the people are with us and we have a commitment to the people. I am sure that under the leadership of Devendra Fadnavis, the BJP will get a majority and Narendra Modi`s developmental model will be replicated in Mumbai," BJP leader Kirit Somaiya tells news agency ANI.

Mumbai BJP president Ashish Shelar casts his vote, tells reporters that glitches like delay in release of voters' list might have an impact on the poll results. 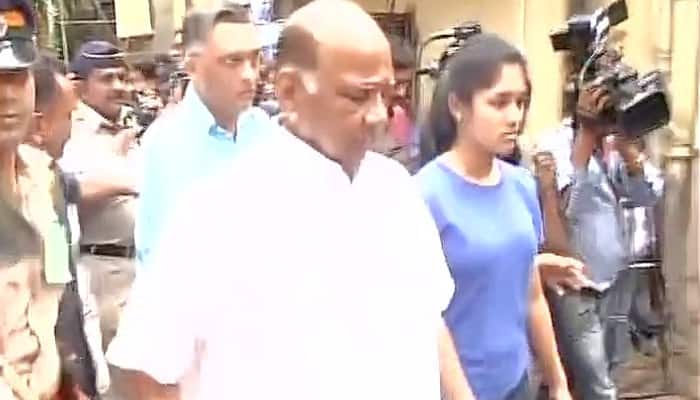 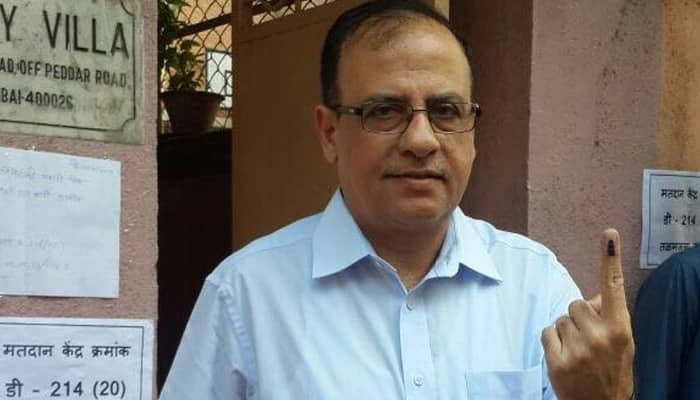 Housing Development Finance Corporation (HDFC) chairman Deepak Parekh casts his vote, says demonetisation has nothing to do with these polls and we need to move on. 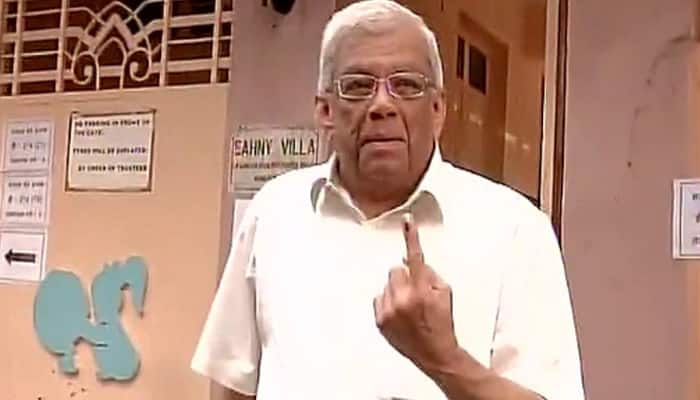 Tina Munim Ambani casts her vote at a polling booth in Colaba, says she voted for good work in Mumbai city. 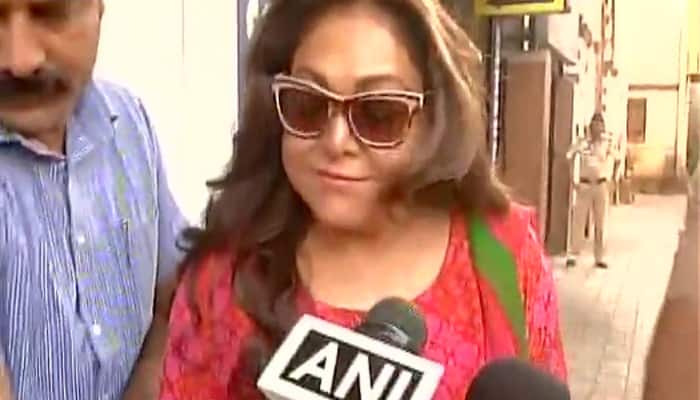 Voting in elections to BMC and nine other civic bodies in multiple cities of Maharashtra begins.

A total of 43,160 polling booths have been set up across the state which will be manned by around 2.76 lakh officials.

For the 151-member Nagpur civic corporation, there are 1,135 candidates in fray, while for the 162 seats of Pune Municipal Corporation (PMC), a total 1,090 candidates are contesting the election.