Arun Jaitley slams opposition, says choice in Lok Sabha poll to be either 'Modi or chaos'

Several opposition parties like the Congress, the SP, the BSP, and the TMC have come together to form a grand coalition or 'Mahagathbandhan' to defeat Narendra Modi-led NDA. 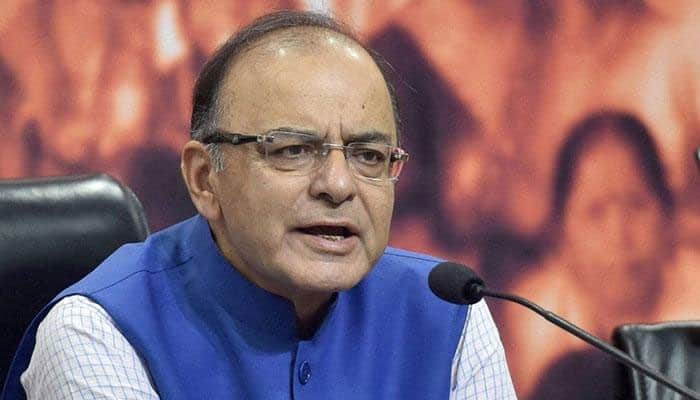 NEW DELHI: Finance Minister Arun Jaitley on Monday lashed out at the 'Mahagathbandhan' saying that it is a self-destructive 'coalition of rivals'. He added that the upcoming Lok Sabha poll would give a choice to voters of the country to choose either "Modi or chaos".

Several opposition parties like the Congress, the SP, the BSP, and the TMC have come together to form a grand coalition or 'Mahagathbandhan' to defeat Narendra Modi-led NDA in the upcoming General Election beginning April 11.

"What was promised to be 'Mahagathbandhan' is turning out to be a 'gathbandhan' of several conflicting gathbandhans. It is a self-destructive 'coalition of rivals'," Jaitley said while highlighting the conflicts among the parties in the coailition against BJP-led NDA.

In his blog, Jaitley also took a dig at lack of a unianimous leader in the opposition camp and said that no one knows who will lead the opposition after the poll. He mocked Congress President Rahul Gandhi calling him an inadequate leader, who has failed despite several attempts.

"He is tried, tested and failed. His lack of understanding of issues is frightening. He aspires to be the leader of this chaotic pack. None of the political parties is capable of any significant number of seats. The alliance will not have a stable nucleus. It has a set of highly ambitious, self-centred and maverick leaders. Barring the Congress and the Left, most of them have done political business with the BJP in the past. Their ideologies and commitment to their constituents are widely different," he added.

Jaitley praised the BJP-led NDA, saying it has no crisis of leadership as the NDA is being led by Prime Minister Narendra Modi. "There is absolute clarity. Shri Narendra Modi leads the NDA and will be the Prime Minister in the event of the NDA victory. His leadership is nationally accepted, his ratings are very high. His track record speaks for itself," said Jaitley.

Calling PM Modi a trusted and secure leader, Jaitley said that the voters will have to choose between PM Modi and the coalition of opposition parties with no projected leader.

"There are multiple leaders (in the opposition), each trying to outwit the other. They can only promise a temporary Government if we go by the past precedents. One can be certain of chaos.  The choice is clear. It is either Modi or chaos," he added.