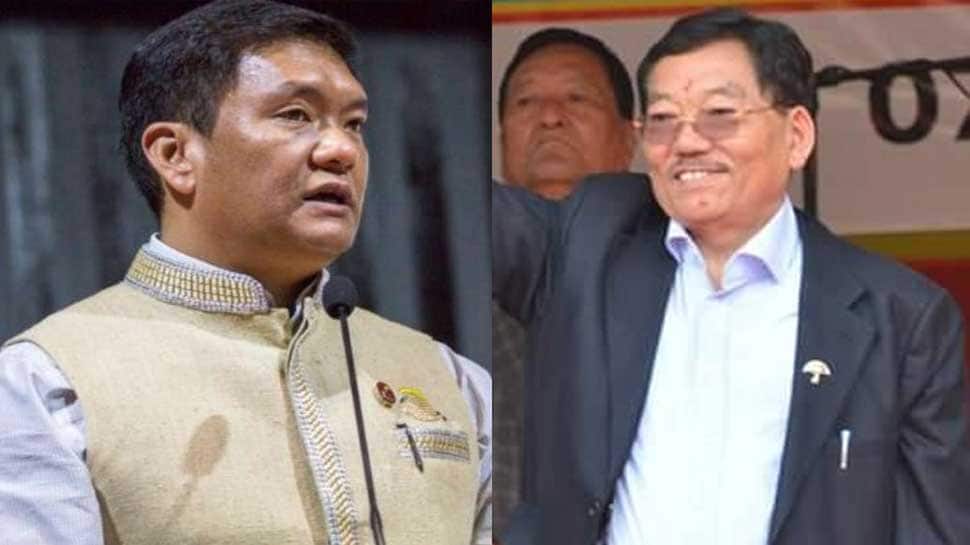 The prominent candidates in Sikkim were Sikkim Democratic Front (SDF) president and chief minister Pawan Kumar Chamling, who was seeking a record eighth successive term as an MLA and is contesting from two assembly seats - Poklok-Kamrang and Namchi-Singhithang. Hamro Sikkim Party (HSP) working president and former footballer Bhaichung Bhutia has entered into the fray from two assembly seats as well, including Gangtok, reserved seat for the indigenous Bhutia-Lepcha communities. Of the 567 polling stations in Sikkim, 120 were identified as critical polling stations and were manned by the Centre Para Military forces.

In Arunachal Pradesh, a total of over 7 lakh voters exercised their franchise for 2019 Assembly election. Altogether 181 candidates including 11 women were in the fray for 57 assembly constituencies out of total 60 seats in the state. The BJP had fielded candidates in 57 Assembly seats while Congress was contesting in 46 seats, the NPP in 30 seats, JDU in 15 constituencies, JDS (12), PPA (9) and one from the All India Party (AIP). There were also 11 Independent in the fray for the Assembly polls in the state. The state had 281 vulnerable polling booths and 662 critical polling stations where security personnel were deployed. For the first time, Voter Verifiable Paper Audit Trail (VVPAT) was used along with electronic voting machines in all the polling stations.

Interestingly, the ruling BJP had already opened its account in the assembly poll by winning three seats unopposed. The winners are Kento Jini from Along East constituency in West Siang district, Taba Tedir from Yachuli seat in Lower Subansiri district and Phurpa Tsering from Dirang seat in West Kameng district.

Welcome back to the live updates of Assembly election results 2019

# BJP is leading on 21 seats, JD(U) on 3 seats, Congress two seats and JD(S) on one seats in Arunachal Pradesh.

# BJP wins 6 seats, leading on 11, Independent and JD(U) win one seat each and are leading on one and three seats respectively in Arunachal Pradesh.

# SDF leads on 16 seats, SKM on 7 seats in Sikkim as counting continues. Incumbent CM Pawan Kumar Chamling is leading from Namchi-Singhithang seat by a margin of about 1,000 votes. Chamling is also leading from Poklok-Kamrang.

# BJP leading on 10 seats, Congress, JD(U) and independent leading on one each in Arunachal Pradesh.

# BJP leads in 10 seats, JD(U) in one and independent is leading in one seat in Arunachal Pradesh.