Shah is contesting in the Lok Sabha polls for the first time from the Gandhinagar constituency. 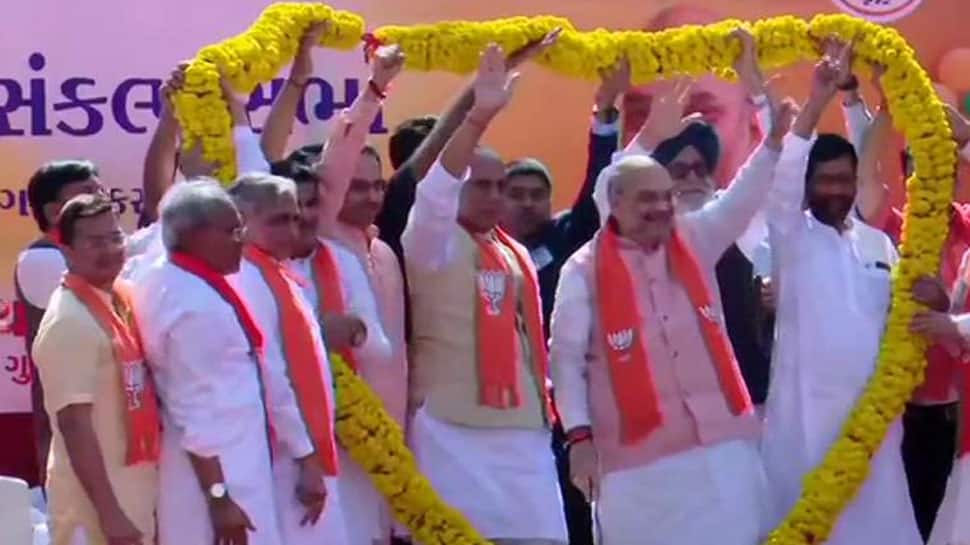 AHMEDABAD: Bharatiya Janata Party president Amit Shah's political procession to file his nomination for the Gandhinagar Lok Sabha seat on Saturday turned out to be a major show of strength of the National Democratic Alliance (NDA).

Shah, who embarked on his road show by garlanding the statue of Sardar Vallabhbhai Patel in the morning, was soon joined by top leaders of BJP allies. This is Shah's first foray in the Lok Sabha polls. He replaced BJP veteran L K Advani, who has been winning uninterrupted from the prestigious constituency Gandhinagar since 1998.

From the road show in Gandhinagar Loksabha. pic.twitter.com/nqAeZCiFNZ

Addressing a Vijay Sankalp Sabha in Ahmedabad before embarking on the massive road show, Shah said, “Election will be fought only on one issue of who will lead the country. Today, nation faces the prime question of who can provide security. Security of the country can only be provided by Narendra Modi and NDA government.”

“BJP is a party of ideologies, a party carrying forward the legacy and principles of Deendayal's teachings,” he added.

Targetting Congress in his speech, Rajnath Singh said, “If Indira Gandhi can get credit for dividing Pakistan, why shouldn't PM Narendra Modi get credit for Balakot strike.”

Reaffirming Shiv Sena's alliance with BJP, Thackeray says, “My father ( Bal Thackeray) taught me to do everything from heart, issues that we raised were of the people, we (BJP-Shiv Sena) had differences but we settled them. We never stabbed the from back and never will.”