The Govt of India had earlier invited the BIMSTEC leaders for PM Modi's oath ceremony. 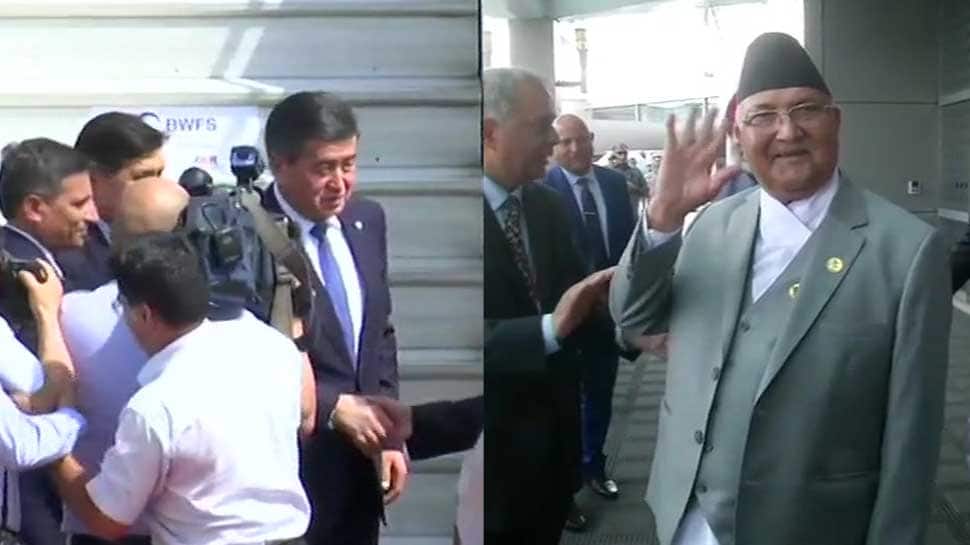 According to reports, Bangladesh President Abdul Hamid arrived in the national capital last night to attend the oath ceremony of PM Modi and his ministers.

President of Kyrgyzstan, Sooronbay Jeenbekov arrived in the national capital in the afternoon to attend the event. Similarly, Nepal's Prime Minister KP Sharma Oli too arrived in Delhi.

Earlier this morning, Mauritian Prime Minister Pravind Jugnauth, who recently visited India in January as the Chief Guest at the Pravasi Bharatiya Divas, also arrived in Delhi for the

Bhutanese Prime Minister Lotay Tshering was warmly received by Foreign Secretary Vijay Gokhale on his arrival in Delhi this morning.

Myanmar President U Win Myint and his Sri Lankan counterpart Maithripala Sirisena also reached Delhi to attend the glittering ceremony at the Rashtrapati Bhavan in the morning.

Besides, special envoy of Thailand, Minister Grisada Boonrach, has also arrived in the national capital for the event.

Capping a landslide election victory, PM Modi and his Council of Ministers will take oath along around 7 PM in the forecourt of the Rashtrapati Bhavan.

The event is expected to be a grand affair with more than 6,000 guests, including leaders from the BIMSTEC countries, opposition leaders Rahul Gandhi and Sonia Gandhi, chief ministers, corporate honchos and Bollywood celebrities set to be in attendance as President Ram Nath Kovind administers the oath of office and secrecy to 68-year-old PM Modi and his ministerial colleagues.

While the guests attending the ceremony will be treated to high tea, President Ram Nath Kovind will host a private dinner for the leaders. The size of the gathering is seen as a reflection of the massive mandate received by the Narendra Modi government in the Lok Sabha election.

Both the BJP and NDA have improved their tally compared to 2014. The event then was attended by about 5,000 guests.

A traffic advisory has also been issued and several roads in New Delhi will be closed for movement of the public between 4 PM to 9 PM. The advisory said that roads including Rajpath--from Vijay Chowk to Rashtrapati Bhavan, Vijay Chowk and adjoining areas including North and South fountain, South Avenue, North Avenue, Dara-Shikoh Road and Church Road will be closed for public between 4 PM and 9 PM

The Government of India had earlier invited leaders of the Bay of Bengal Initiative for Multi-Sectoral Technical and Economic Cooperation (BIMSTEC) countries as well as Kyrgyz President Jeenbekov, the current chair of the Shanghai Cooperation Organisation, and Mauritius PM Jugnauth for the PM Modi's swearing-in.