Two candidates have been named from Haryana, three from Madhya Pradesh and one from Rajasthan. 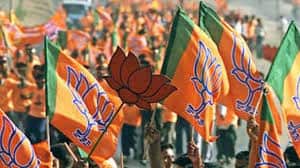 Two candidates have been named from Haryana (Hisar and Rohtak), three from Madhya Pradesh (Khajuraho, Ratlam, Dhar) and one from Rajasthan (Dausa).

Brijendra Singh, son of Union Steel Minister Chaudhary Birender Singh, who offered to resign from the cabinet and from the Rajya Sabha on Sunday, will contest from Hisar. Arvind Sharma has been given a ticket from Rohtak.

However, suspense continues for the prominent seats like Bhopal, Vidisha and Indore.

Also, BJP is yet to announce its candidate from Vidisha seat, which was represented by External Affairs Minister Sushma Swaraj.

The BJP had announced 15 names on March 23, and three each on March 29 and April 6, respectively.

With Sunday's announcement, the saffron party has named candidates for 24 out of 29 Lok Sabha seats in the state.